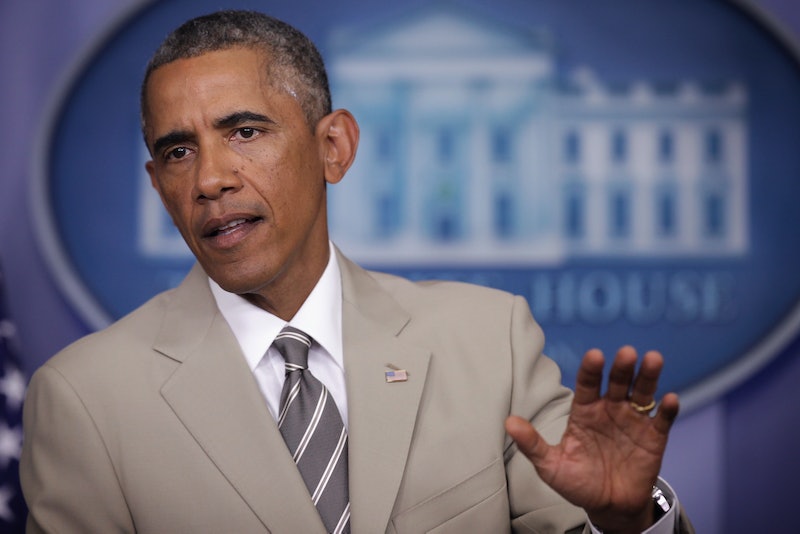 It's still summer, amiright? And nobody is more conscious of that than President Obama, whose August "holiday" was riddled with vacation-shaming, fury over his poorly timed rounds of golf, and endless press conferences. But the president is determined to squeeze the very last ounce of joy from summer — hence the tan suit Obama wore to a press conference Thursday. Obama said a number of important things — a flat-out refusal to attack Russia, a good ol' dig at Putin — but everybody was pretty distracted.

Is it tan? Is it taupe? Also, there's a slate-gray tie in the mix, so Obama's clearly thought this one through. Everybody's entitled to a bit of experimentation sometimes, especially during the embattled final term of your presidency and when, Labor Day be damned, it's still summer, dammit. Most likely, Obama didn't get to wear the flowery swimming trunks and mojito combination he was craving this summer, and this is the presidential version of going off the rails.

Shortly after the press conference/Suitgate, USA Today bureau chief Susan Page Tweeted: "Message from senior White House official: 'He loves that suit.'" Wall Street Journal's Cicely Dyson pointed out that this isn't even the suit's first outing; it appeared briefly around Easter. Having been faced with a smattering of global crises of late — from the West Africa Ebola outbreak to the Ferguson protests following Michael Brown's death to ISIS' hostile takeover — maybe the suit is Obama's version of a comfort blanket.