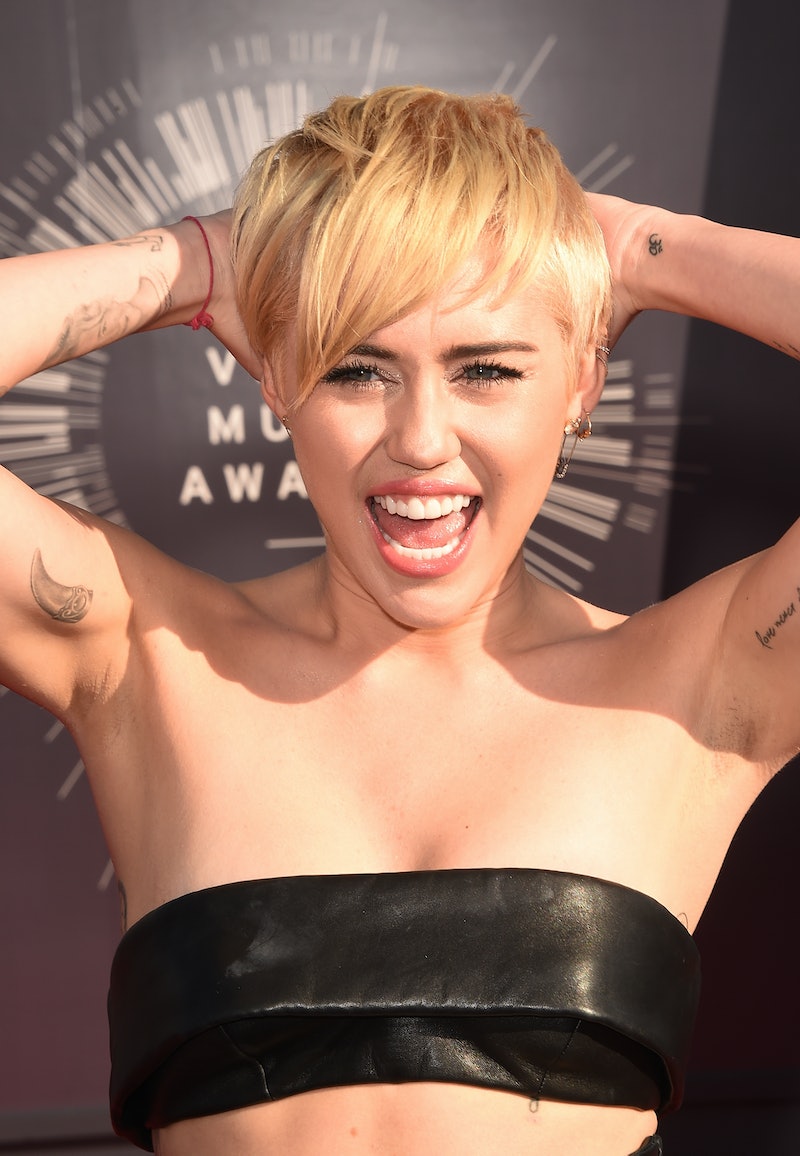 Miley Cyrus is a rebel and a hellion. This is not new news. Pop culture's wild child is at it again — Miley Cyrus is on the cover V Magazine 's Fall 2014 Rebel Issue, posing with stuffed animals and wearing an, uh, interesting and unexpected plush bodysuit that looks composed of the same material as most Sesame Street character costumes. Cyrus often poses topless and naked, and she wears her birthday suit well, positioned provocatively yet artfully, accompanied by her newfound plush pals.

We know that Cyrus loves her critters and her fur babies. Her pooches and her new pet pig Bubba Sue, an unusual celeb pet for sure, are her BFFs. So having her pose with a bunch of stuffed toys isn't a big stretch. Oh, and Chanel's Karl Lagerfeld shot the issue, adding to its flawlessness.

As is the case with most Miley Cyrus magazine covers and glossy images, the V cover is weird, creepy, cool, awesome, artful, outrageous, and memorable. She is wearing this fuzzy, baby blue bathing suit thingy that looks like she took scissors to Cookie Monster's fur and made a suit out of the swatch she borrowed. It's strange and the more I look at it, the more I absolutely love it and want one of my own. The bodysuit, that is.

It's probably her distant, doll-eyed stare and the fact that she has super pale skin that makes me love everything about this image.

Go ahead, peep it yourself. The issue lands Sept. 10, but for now, gawk at Miley Cyrus in all her plush, skin-showing glory. At least she didn't turn the stuffed critters into a frock a la Lady Gaga and her Kermit the Frog dress.

Is that not the coolest bodysuit x bathing suit ever? BTW, if you dig the bodysuit look, check out these wearable, real-life bodysuit options.

Here's Lagerfeld, proud of his handiwork. Speaking of hands, does he ever take of the signature gloves?

Cyrus isn't resting on her laurels but on her plush toy crew. She looks like a modern Mia Farrow with the pixie cut and smoldering stare. Somewhere, her ex-fiance Liam Hemsworth is noshing on his own heart, cursing the fact that he let her get away.

More in-the-buff Miley. She is ever the consummate promoter.

And while we've got you here, these are some of Miley Cyrus' other memorable mag covers. But then again, when isn't our girl memorable?

Remember when Taylor Swift wore a white pantsuit to the VMAs? It was pretty but . . . a bit mature, and dare I say, snoozy? This, this is how you wear a white pantsuit. You add a whole lot of sideboob and gobs of gold.

Here's T. Swizzle in her white pantsuit since I was thinking about it. Classic, pretty, but . . . older and not as fun as Cyrus' version.

I wonder if Miley's shoulder tastes like ice cream? I want to steal all that bling she's rocking.

This is probably my fave Miley Cyrus cover ever. The stacked bracelets are amaze, and she's totally transformed.