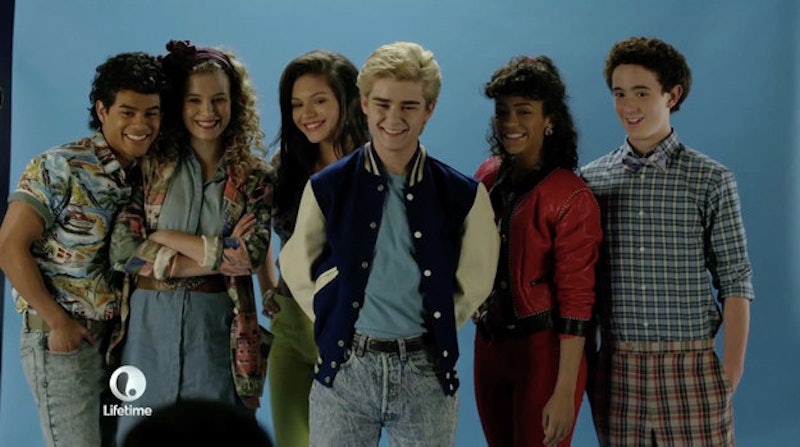 When you turned on your television to watch Lifetime's highly anticipated The Unauthorized Saved By The Bell Story , you — hopefully — didn't tune in to get an accurate depiction of what actually went down behind the scenes at Bayside, but rather a healthy dose of some highly exaggerated drama. The operative word in the title, after all, is "Unauthorized," and you were likely ready for a guilty pleasure that attempted to rip apart the beloved cheesy '90s teen classic. But what we all should have been prepared for, given the movie's network, was an onslaught of Lifetime cliches. What, like you thought you could watch something on Lifetime without seeing some teen drinking or a heaping amount of over-emotionality accompanying even the smallest details? C'mon. The real shocker is that no one got pregnant.

But we had Dustin Diamond befriend a "bad influence." We saw some not-so-great parenting (stage mom alert!); we heard a whole lot of harsh words from the mouths of parents. We saw some love triangles (oooh teen drama). We saw some self-esteem issues. A teen got into a car accident in a mysteriously mentioned-but-never-seen segment dedicated to showing us how serious real life is when it's not on screen. We saw teen drug use. We saw young people dramatically grasp for ways to be taken seriously while also trying to be regular, normal teenagers. Ah, the woes of growing pains!

So, yes — all of those tropes are ripe for a Lifetime movie, but while the movie was laden with those cliches, it didn't ruin its source material, Saved By The Bell, itself. It's unclear if the movie sought to be a sorta-kinda-truthful biopic or an eye-opener to tear down fans of the show, but between these cliches and the eye roll-inducing overacting, it was clear that this movie and the series itself were two totally separate entities (if the #unauthorized watermark at the bottom of the screen the whole time didn't give you any other indication).