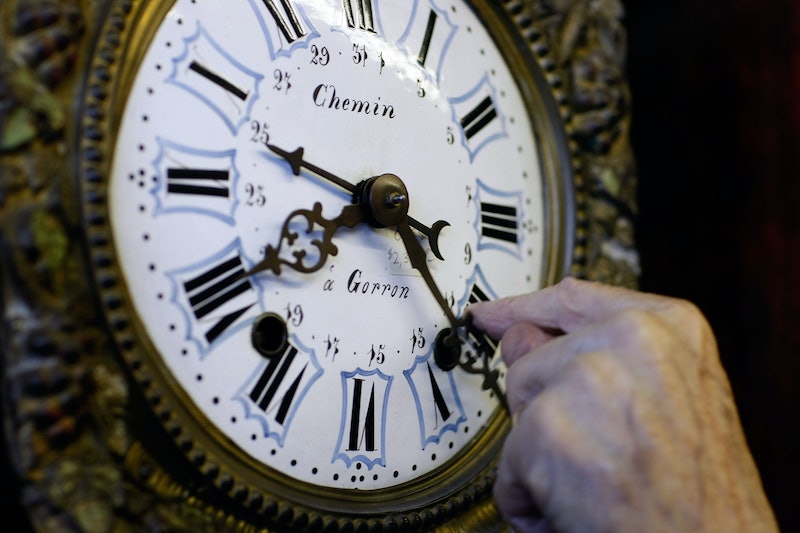 Ah, the first day of school. An American tradition, as wholesome as — wait, it's the first day of school already? How is that possible? Didn't classes just end, like, two weeks ago? And how is it the end of the summer? Didn't summer just start last month? And how is that Brad and Angie got together nearly a decade ago? Where is all the time going?

Somewhere between youth and adulthood, the nature of summers — and of time itself — seems to change. Once a seemingly-endless period of time devoted to aimlessly riding your bike through the neighborhood, wandering around the town pool complex, or lazily antagonizing your younger siblings, summers transform, at some point in early adulthood, into a frenzied dash to shove as many margaritas and beach trips as possible into a season that now feels like it lasts about 72 hours, tops.

So what gives? Does time actually speed up as you get older? Is youth genuinely wasted on the young? Was your grandma actually right about everything, including how delicious coffee candy is?

Hold onto your mortality hat and let us explain. Because even this article is going to be over before you know it.

do WE PERCEIVE TIME differently AS WE AGE?

Scientists have been trying to unravel the mystery of why time flies as you age for centuries. William James, the father of American psychology, even discussed the concept in 1890 in his seminal early psychology text Principles of Psychology.

James noted that “each passing year converts some of this experience into automatic routine which we hardly note at all, the days and the weeks smooth themselves out in recollection to contentless units.” (So upbeat!)

Some recent studies seem to have confirmed James's theory: a 2005 German research study on the subject, conducted by Dr. Marc Wittman, set out to examine how time is processed by the young and old alike. The study's results backed up the idea that “perception of the passage of time and the retrospective judgment of past periods of time are a function of chronological age” — meaning, our perception of time's passage genuinely does change as we age.

A 2010 study examining why our perception of time changes as we age has challenged a lot of our preconceived ideas about this phenomenon. The study, conducted by American researchers Steve Janssen and William Friedman, found that age isn’t actually the main factor that affects how we experience the passage of time.

The study found that “age differences in reports of the subjective speed of time were very small, except for the question about how fast the last 10 years had passed” — so, for the most part, adult subjects of different ages all experienced the passage of time at the same break-neck pace.

So why does life seem to go so much faster in adulthood than it did when you were a jobless, aimless little kid? Janssen and Friedman chalked differences in how we experience the feeling of the passage of time at different ages up to something called “time pressure.”

Time pressure, as you might have guessed, is the feeling that there isn’t enough time to get things done — a feeling that plays an increasingly large role in our lives as we age and assume more responsibility.

Probably. A 2007 Gallup poll found that 47 percent of adult Americans believe that they don’t have enough time to do what they want to do. Since you've probably been under increasing time pressure throughout your life since your early teens, it's no wonder we remember our childhood summers as soft-focus montages of spending entire days just reading Animorphs books in a hammock. Those days were probably the last times you weren't under serious time pressure, and thus didn't panic about how time was slipping from your fingertips.

A follow up study by Janssen and Friedman published this year elaborates on the relationship between “time pressure” and the perceived speed of time. Finding that individuals under intense time pressure felt that time was slipping away in the present, the study reported that individuals who had been under time pressure for the past decade felt that those 10 years had been over in an extraordinarily brief period of time as well.

The study’s results “suggested that participants systematically underestimated past time pressure. This memory bias offers an explanation of why life appears to speed up as people get older.”

IS THERE ANY WAY TO SLOW TIME BACK DOWN?

Some factors are out of our control: three months is simply a much longer chunk of a 10-year-old's entire life, which might also explain why it would also seem longer. But some researchers believe that experiencing time as set on a permanent fast-forward doesn't have to be inevitable. David Eagleman of Baylor College of Medicine, believes that we can even shock our brains into experiencing time at a slower rate.

Eagleman — the subject of a lengthy profile in The New Yorker a few years back — suffered a near-death experience as a child, during which time slowed down for him. As an adult, he's devoted himself to studying the systems of the brain that create our concepts of time. Though Eagleman has spent time researching how brains measure time during traumas (from actual near-death experiences to those "free-fall drop" rides at the amusement park), he's also postulated that our perception of time is sensitive to any new stimuli.

Eagleman believes that our perception of time is related to the intake of new information. In other words, “[time] stretches out when you really turn your brain resources on, and when you say, ‘Oh, I got this, everything is as expected,' it shrinks up."

Take, for example, a commute to a new workplace: “When you drive to your new workplace for the first time," Eagleman claims,"...it seems to take a really long time to get there. But when you drive back and forth to your work every day after that, it takes no time at all, because you're not really writing it down anymore. There's nothing novel about it."

So, is learning something new the only way to stop time from rushing past you like an out-of-control freight train? Claudia Hammond, author of Time Warped: Unlocking the Mysteries of Time Perception, believes that it is. She suggests that an intake of fresh, unusual experiences — rather than a predictable routine — can trick our brain into once again registering time more slowly, the same way we did as children.

So if it seemed like your summer was over in a flash, don't freak out. Seemingly short summers are normal, but not necessarily inevitable. Instead of mourning, spend these last few days of summer giving something new a shot. And if that doesn't work, see if you can't slow what's left down by turning off your phone, meditating, and perhaps, doing a whole lot of nothing.