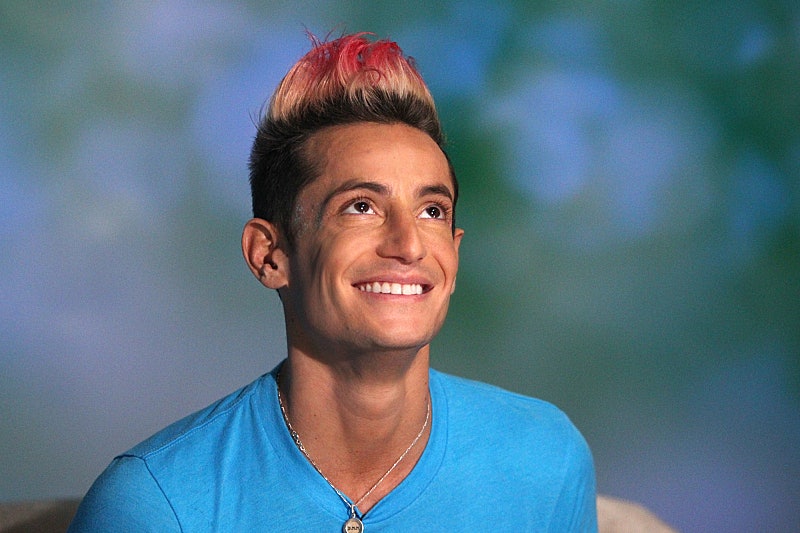 Remember last week when I said Big Brother 's Christine and Cody were the villains of the house? I'm woman enough to admit I was wrong. There is actually a houseguest who is more annoying, insulting, conniving, and manipulative than everyone's least favorite flirtmance. And that person is Frankie Grande.

If you had asked me back when Season 16 of Big Brother premiered on June 25 who would win America's Favorite Houseguest on finale night, I would have said Frankie, jazz hands down. In fact, I think we all would have. He had everything to woo all Big Brother fans across the land: a famous little sister (say it with me now: Ar-i... ana Grande?) with a rabid fan base, an outgoing personality, and a memorable accessory.

But now I don't think there's anyone worse in the house, except maybe for Victoria. I really, really, really dislike Victoria. How did Frankie go from Team America shoo-in to one who might be remembered as one of the most hated players in Big Brother history? It happened slowly and then all at once.

We were still in the Honeymoon Phase with Frankie back in Week 2 when Devin was HoH. However, hindsight is 20/20, and we really should have known that Frankie was up to no good back then. We were already in love with the fledgling showmance Zankie (#WeMissZach), but Frankie basically helped Zach get put up on the block. It was pretty horrifying to see Frankie treat Zach that way since the two seemed so close in the house. Though Zach was initially upset, Frankie calmed him down, and the two patched things up. It also helped that Zach escaped eviction that week. Zach seemed cool with it, so we were cool with it.

Cut to Week 7, and the houseguests finally get wind of Frankie's wheelin' and dealin'. Everyone was sick and tired of Frankie's lying, especially Caleb, who threw the Battle of the Block competition in an effort to keep Frankie on the block and send him home. Unfortunately, Frankie didn't need Caleb's help at all and won the Battle of the Block all by himself, much to the chagrin of all of the houseguests and those of us watching at home who had hoped Frankie's lies would finally catch up with him enough to evict him. Although Frankie seemed to get back in everyone's good graces after he revealed his Grande secret, this week was a major turning point for the houseguests and America, signaling that Frankie is not to be trusted.

I lost respect for Frankie once again when he backstabbed Zach and helped get him evicted. But the absolute point of no return for me was when Frankie didn't help save his fellow Team America member Donny from eviction and instead chose to put on a ridiculous musical. I love Broadway as much as the next Grande, but that was the last bit of hope I had that sweet, sweet Donny would live to see another day in the Big Brother house. Any enemy of Donny's is an enemy of mine.

To make his betrayal of all of America even worse, after Donny's eviction, Frankie looked the camera, i.e. the face of America, straight in the eye and basically told us all to go screw ourselves, knowing full well that America now hates him. Do you get the idea that Frankie is a terrible, terrible person yet? No? He stood by his decision to not do the Team America mission to save Donny and then proceeded to call Donny dead weight in the Team America alliance. It just gets worse and worse every time Frankie opens his mouth, doesn't it?

Now everyone in the house hates Frankie. He gave off a bit of a 'tude to Christine when he thought she was defending Nicole and then was a selfish jerk for not volunteering to be one of the Have Nots for the week when he was the only houseguest to not have done it for a second time. Seriously, is no one convinced that this guy needs to go yet?

But, according to the live feeds, Caleb toyed with the idea of backdooring Frankie after Christine won the Power of Veto, but he ultimately decided to put up Victoria as a replacement nominee. The only good thing to come out of this is the possibility of Victoria going home.

As if Frankie's vicious gameplay wasn't enough to make me despise him, on top of all this, he's said some pretty terrible things during the live feeds. Earlier in the season, Frankie said Jocasta "can kill herself" not long after she performed a memorial service for his and Derrick's deceased grandfathers. More recently, he said that lesbians choose their sexual orientation while gay men are born that way. And his latest comments suggesting Victoria should be double teamed and have her virginity taken have rightfully turned even those who don't watch Big Brother against Frankie.

Oh, Frankie. Not even Ariana can save you now.