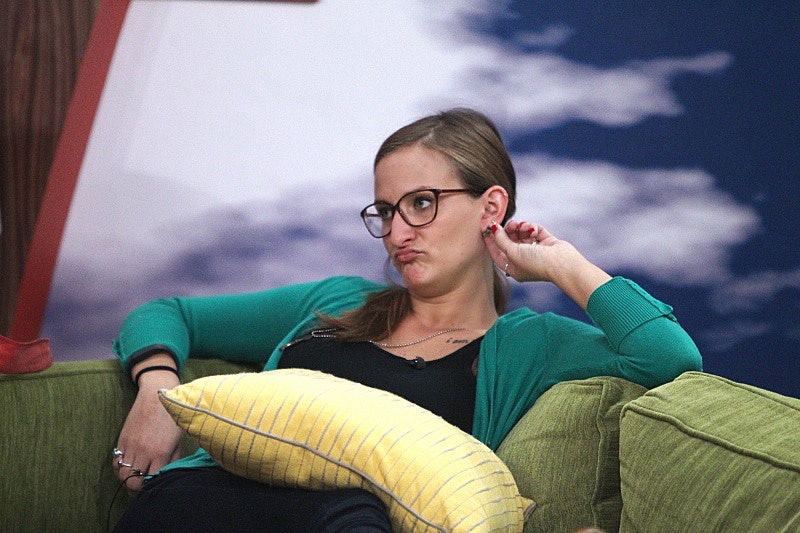 It was the boo heard around the world, at least that's what it seemed like when Christine was evicted and booed during Big Brother 's double eviction on Thursday. I am still reeling from how uncomfortable her exit was when The Detonators betrayed Christine. Did she think she was in danger of eviction? Probably not. Did she expect to walk out to loud booing from the Big Brother audience? There's no way she could have seen that coming.

It happened so quick that it almost didn't seem real, but finally The Detonators turned against one of their own and voted out Christine over Victoria, making her the sixth member of the jury. And while some might be sad to see Christine leave the house — ahem, Cody loses a cuddle buddy — there were definitely a lot of people in the house (and out of the house) that were excited to watch her walk out of the door. So much so, that she was booed excessively when she walked out to the live audience.

Julie Chen, being the graceful woman she is, didn't mention that it wasn't the warmest reception, but that doesn't mean the houseguests didn't bring it up. The following ten minutes after Christine so hastily walked out the door — seriously, she didn't even say goodbye to anyone — the houseguests gossiped about how awful her exit was and how they've never heard anything like that before.

While I don't think every single houseguest will be booed as they exit the house, there are definitely a couple of them that might want to check their ego at the door, because they are in for a rude awakening. Frankie seems to believe he knows why Christine was booed upon her exit, because of course Frankie knows why she was booed.

What's that saying I used in elementary school? Oh yeah, "I'm rubber, you're glue, whatever you say bounces off of me and sticks onto you." Just remember that, Frankie, when you go running around calling people evil. He then goes on to explain that he also "has heard" that Christine was talking about him and his family in the Diary Room, which could also attribute to her boo-ing.

I don't remember Christine saying anything against America's sweetheart (and I mean that wholeheartedly) Ariana Grande, but she has definitely said things against Frankie. But for some reason, I am thinking that Christine talking bad about Frankie in the Diary Room is actually the reason she received a few cheer — just a hunch.

Then again, we can't all walk out with an offer to guest star on a soap opera, can we Donny?