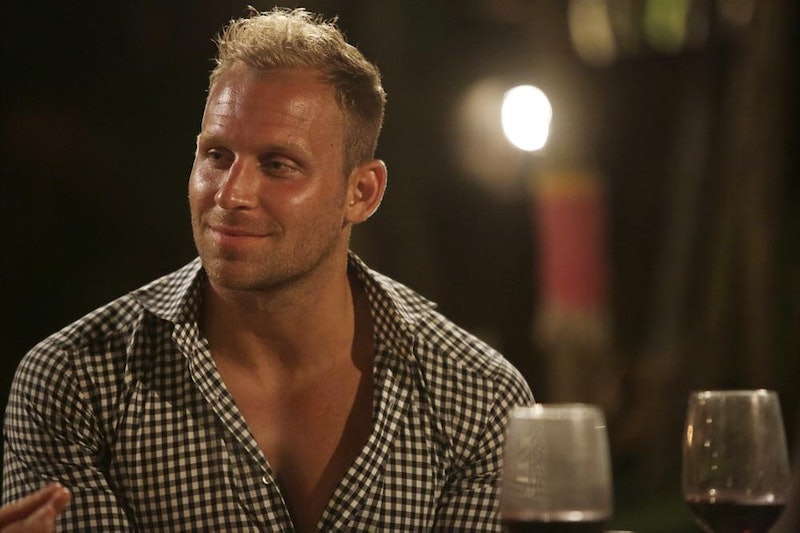 ABC's latest reality brainchild, Bachelor in Paradise, has been a nonstop series of amazing, GIF-able awkward moments. But it's also had a surprisingly sweet amount of relationships bloom. One is Michelle Money and Cody Sattler, the beauty and the bodybuilder pairing that came out of nowhere halfway through the inaugural season. He came to the show looking to get with Clare, but she rebuffed him and eventually left the show. Then, Michelle caught his eye, and the two started talking. He helped her open up; she's tough enough to make him take things slow. Cody & Michelle work strangely well together, even after one of the weirdest dates in Bachelor history.

Some producer must have been super overworked (or just delightfully evil), because having Cody and Michelle pose for wedding pictures on their first date was some kind of mad genius. It was weird, it was kind of creepy when Cody got super into it, and it really broke the ice between them, allowing them to get to know one another rather quickly. They've only been together for a matter of days, which may be a lot in the context of Bachelor in Paradise, but also is still only a matter of days. You can't really know if you like someone before you make it through the metaphorical honeymoon phase, let alone if you go on a real honeymoon before you've known one another for a few weeks.

Which is why Michelle and Cody, though they seem great together, probably shouldn't duplicate those Tulum wedding photos just yet. It's not that they don't seem good together, it's just that when you're still on your "best behavior" with a girlfriend or boyfriend, you don't know how you'll deal with tough stuff like arguments or disagreements. And here's the most serious reason why they shouldn't get married just yet — Michelle has a daughter, Brielle, who's nine years old. Whenever kids are involved, you have to be very careful about romantic attachments, and Michelle appears to understand that. Still, Cody is so excited about the idea of getting together, I'm sure they've talked about getting married once filming came to an end.

And to their credit, they did look super adorable in that wedding photo shoot. Michelle was understandably freaked out about doing something so intimate on the first date, especially with memories of her actual wedding running through her mind. But once she relaxed a little, the two actually hit it off. The same will surely be true behind the scenes. Michelle and Cody could really last if they don't worry about marriage until they're outside of the Bachelor in Paradise scope.