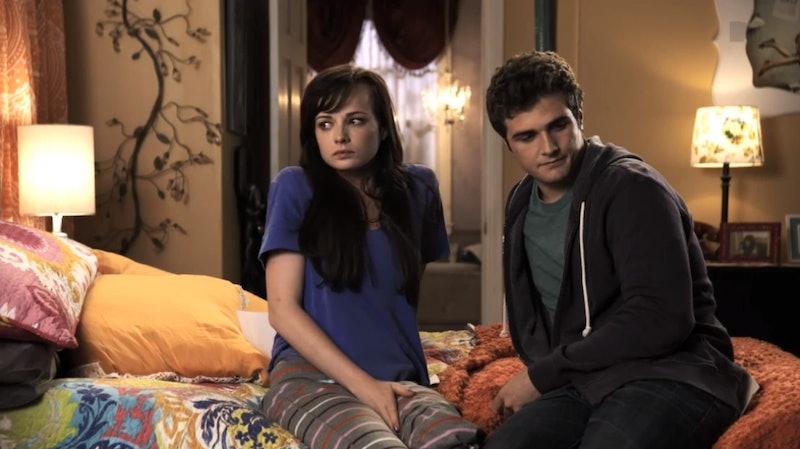 It's been a long summer and it started to feel even longer after the big bombshell revealed in the Awkward Season 4 midseason finale: Jenna Hamilton found out that Eva. Is. Pregnant. Eva is also crazy in that bunny-boiling, melodramatic Lifetime movie kinda of way, but hey — that bun in her oven might just belong to one Matty McKibben. It's a bundle of news that may have thrown a wrench into the hopes Jenna had for any inkling of romantic reunion between her and Matty. So, what now? Spoilers and promos for the second half of Awkward Season 4 (which begins on September 23) have posed the question: Can Jenna finally get over Matty once and for all?

Jenna definitely shouldn't carry a torch for her first love to college, so why not squash the leftover glowing embers of love right now and enjoy the rest of her senior year, Matty-free? Easier said than done. After all, they still go to the same school, walk the same halls, and have the same friends. During the first half of Season 4, we saw that Jenna and Matty playing purely platonic pals surely doesn't work, because there will always be that romantic spark between them, that connection. Awkward's showrunners recently told TVLine that Jenna and Matty's "emotional tie" is the center of the show.

Jenna ended Season 3 literally dancing on her own and deciding that she didn't need a man... until Season 4 premiered earlier this year. Jenna and Matty went very quickly from "friends" to "friends with benefits" territory, and then "not really friends at all." Jenna eventually found a more grown-up relationship with college-man Luke, but her attempt at playing matchmaker with Matty and Eva worked all too well — and Jenna chose to protect Matty over working things out with Luke.

But newsflash, Jenna: Whether Eva's name is Eva or Amber, the pregnancy test didn't lie — that crazy bitch is with child. Matty's child, most likely. Sure, Felicity and Ben somehow worked it all out with his out-of-wedlock baby and baby mama by the end of Felicity, but I think Jenna needs less complications in her life — not more — before she heads off to college.

While Jenna may have blown it with Luke due to her leftover feelings for Matty, there's lots of time left to make the most of her Palos Hills senior year. Here are some ways we think might help Jenna kick the Matty habit for good.

Concentrate on those college apps

"Senior year was two thirds over and I still haven't been accepted to college yet," laments Jenna in the latest fall promo, right before she tells Matty that USC rejected her. We've seen Jenna try to raise her college application profile a bit, but I think she needs to use all energy that she's used to pine over Matty and instead use it to aim for getting into the right college. Jenna's already dated a college guy and the writing talent she discovered in Season 3 could make her the perfect fit to be an English/Creative Writing major. Now, all she needs is right school and an acceptance letter.

Find a secret fling — and keep it away from Matty

Some say that best way to get over one romance is to distract yourself with another. Yeah, Jenna has moved on and on and on with Jake, Colin, and Luke, but like always, she jumps into those relationships with her whole heart — and somehow her feelings for Matty always get in the way. This time around, her new fling should be short term and casual, since she's graduating soon and the guy would technically be a rebound. Perhaps she should take a cue from Matty's love philosophy in Season 1 — keep it on the DL, don't DTR, and just have some fun. And especially keep him away from Matty.

Enjoy time with her high school friends while she still can

Jenna and Tamara have felt it already — the BFFs are growing apart. And they'll continue to grow apart. I mean, Season 4 even had them completely lose Ming (remember her?) from their bestie roster. It's almost a a guarantee that so many high school friendships don't survive the big college transition. So instead of pining over Matty, Jenna should be cherishing the time she might have left with Tamara and, hell, even Sadie.