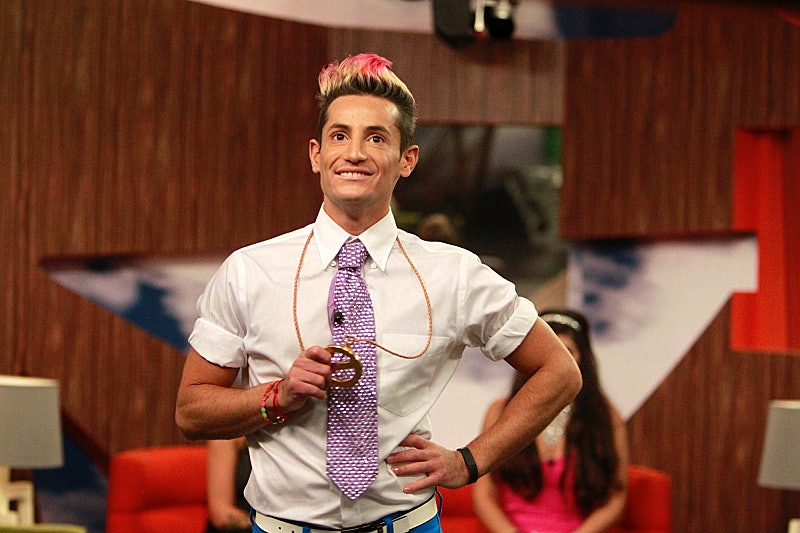 When it comes to widely despised Big Brother housemate Frankie Grande, there's no such thing as a humblebrag, just a whole lot of bragging. During Tuesday night's episode, the unrelenting competition victor won this week's freak show-themed Power of Veto competition. While Derrick was a close second, Frankie made damn sure to rub salt in the wound. "You were soooo close," Frankie told his biggest competitor, oozing smugness. Frankie then crowned himself and giggled, while America shuddered.

Frankie was even more insufferable in the diary room, telling viewers (the very viewers he has yet to realize can't stand him), "I'm the player to beat in this game." "I've got a lot of power and there's a lot I can do with it," he later said, like the terrible reality TV show villain that he is. That may be true, and Frankie's alliance members may be kicking themselves for not getting him out when they had the chance, but there's still hope.

That's because Tuesday night's episode, much like Sunday night's episode, is ultimately pointless and doesn't count. (Don't worry, Jeff and Jordan, your engagement is still legit.) Season 16's remaining rocket scientists chose to push the big mysterious button in the big mysterious room which not-so-subtly has the word "GAME" backwards all over its walls. Pushing said button will cause a rewind, meaning Frankie's victory's this week — as well as his nominees Victoria and Cody — won't matter once the rewind sets in.

Frankie, much like his cohorts, didn't use any of the power he was "wielding," even after having a pep talk with himself in the HoH room. He not only convinced himself that he took Derrick, Cody, and Caleb to the end with him (pssssshawww!), but that his nine competition victories make him a big, glittery target. "You will be judged by the world," Frankie told himself while considering backdooring one of his alliance members. (He ultimately did not, because no one has done anything this season.) Well, that's true, Frankie, but not for the reason you think.

If only this rewind happened when players we actually cared about like Donny and Nicole were still around. We'll still take getting to watch Frankie meltdown when he realizes what happened by pushing that button.