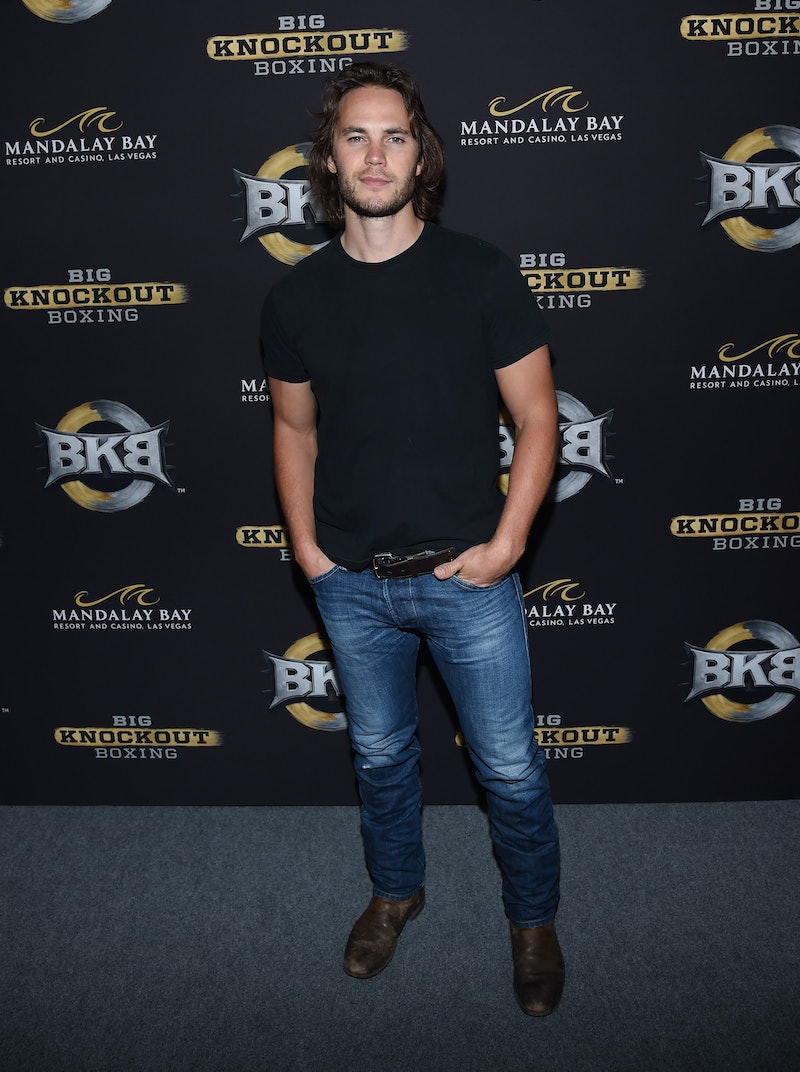 When the story broke on Wednesday that Friday Night Lights star Adrianne Palicki was engaged and officially off the market, my heart instantly went out to Tim Riggins. Who would he turn to when he got the news? Would that temptress Lyla Garrity be there to offer him an illegally bought beer to ease the burn? Would Jason Street roll over to his house to hang with his buddy in his time of need? No! And you know why? Because Tim Riggins is a fictional character that I refuse to believe doesn't actually exist. Is that embarrassing to admit? A little. Will there ever come a time in my life when I stop referring to myself as Mrs. Riggins? Probably not. Am I okay with it? Yes, because his real life counterpart, 33-year-old actor Taylor Kitsch is single and has all the Riggins bad boy charm with none of the Riggins bad boy baggage. Therefore he's the perfect contestant for the next cycle of ABC's The Bachelor.

After leaving FNL, Kitsch quickly rose to fame outside of the Dillon Panthers fandom, scoring lead roles in (the awful) John Carter, (the even worse) Battleship, and (the ridiculously AMAZING) TV movie The Normal Heart. His critically acclaimed role in The Normal Heart quickly led to some pretty serious rumblings that he'll be taking over for Woody Harrelson and Matthew McConaughey in the second season of True Detective, which only adds to his Most Eligible Bachelor status.

The typically private Kitsch revealed that he was coming off of a rough breakup and newly single to Man of the World magazine in December 2013, telling them, "I'm not getting married next year, I'll tell you that much."

OK, you might not be getting married, Taylor, but just in case you change your mind here are a few gals that I think might be perfect for you to take home to Mama Riggins (ooh, too soon?). Or if Celebrity Bachelor does ever happen, maybe they could be contestants...

Don't get me wrong — I hated the Kerr-Bloom breakup as much as the next person. Although the former Victoria's Secret model is still pretty chummy with her ex, Kitsch could be the perfect guy to take her mind off of Orlando once and for all. They could be really cute! And by cute I mean ridiculously beautiful.

Hermione is an odd choice when you first think about it, but this could be a really great case of opposites attract, I promise. Her good girl sensibilities combined with his rugged, Canadian charm? Feels for days.

This True Blood babe is back on the market and a total catch. They could make sweet, sweet episodes together, among other things.

Could Julianne could dance her way into Kitsch's heart? She's yet to publicly date anyone since her split from Ryan Seacrest in 2013, and something tells me they could tango all the way down to the altar. (Enough dancing puns for you?)

Anna Kendrick is by far the coolest girl in Hollywood, and her laid back vibes could potentially mesh perfectly with Kitsch's. Just get together, already, you two.

Katie Holmes is one of the most low-maintenance celebs around, and she deserves a guy who's going to jump on couches for her in PRIVATE. They're also both TV show vets, so maybe they could make a Dawson's Creek-Friday Night Lights crossover happen?

Regardless of whether he chooses to get married next week or stay a bachelor forever, Taylor Kitsch/Tim Riggins will forever remain the ultimate bad boy. TEXAS FOREVER!