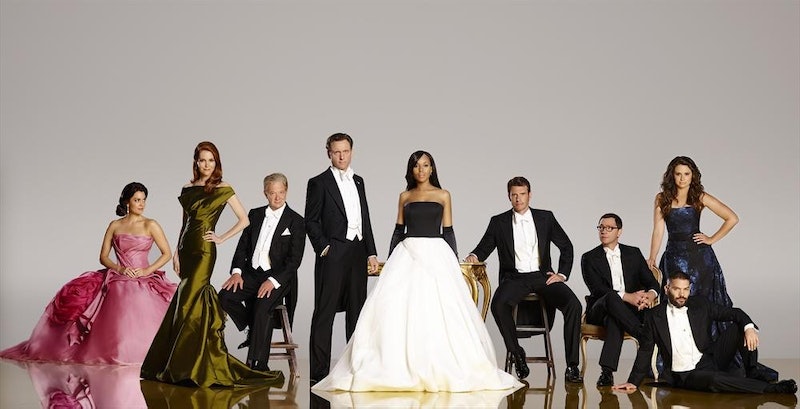 Greetings, fellow Gladiators, and welcome to what’s sure to be another jam-packed year of positively scandalous behavior. That’s right, folks — in just a few short weeks everybody’s favorite political fixer Olivia Pope will once again grace our television screens during Scandal ’s Season 4 premiere, which kicks off on Sept. 25. It’s the moment we’ve been waiting for all summer long and now it’s (almost) finally here! However, there’s always the chance that some of you — you know who you are — are not fully caught up on watching Scandal Season 3. In fact, there may even be a chance that some people haven’t seen any of the third season. (Gasp!) Luckily for you, I’m quite the “fixer” myself and know just how to get you all caught up in time for Season 4’s big premiere. In other words, consider it handled.

So, go change into your finest pantsuit, pop open your very best bottle of red wine, and locate the fastest internet connection you can find. Because speaking on behalf of all who have already seen Season 3, you’re not going to want to be dealing with any pesky streaming issues. Let’s just say STUFF HAPPENS. Now sit back, relax, and check out all of your online viewing options below:

If you’re a Netflix subscriber (or at least know someone who is and doesn't mind sharing) then you’ll be happy to hear that all three seasons are available to you right now. As in, at this very instant you could be watching Pope & Associates in all their glory. So I guess my only question for you is why are you still reading this post? You have some serious binge-watching to do!

For those of you who are only a few episodes behind, ABC.Go has the last five episodes of Season 3 posted on its website. All you have to do is go to the Scandal page and select the episode you’re looking for. It's that simple. Sure, you’re going to have to deal with a few annoying commercial interruptions, but I think we can all agree this show is definitely worth that small sacrifice. (Hulu and Hulu Plus subscribers also have access to the same 5-episodes, BTW.)

Like with many situations in life, if you throw some money at it, it will more than likely get fixed. Scandal episodes definitely fall under that category. You can easily buy any episode of any season (or even the entire season itself) on iTunes, Amazon, and Vudu. So if you’ve got a little extra money to burn this month, why not put it toward your TV-watching endeavors? That way you’ll flat out own the episodes and be able to watch them again whenever you’d like.

Lean On A Friend

As you know, time is of the essence here, so if you’re unable to use any of the above options you could always ask one of your friends for help. Whether it be through Skype or gchat, have someone who’s actually seen Season 3 describe in detail everything that happened. (Bonus points if they act it out or use emojis for assistance.) Obviously, this is the least preferable option, considering that you’re not actually getting to witness the show in action. However, you can always try to locate key scenes on YouTube later on. Plus, how great would it be to sit there on your computer with a bottle of wine while your friend does his/her best Olivia Pope impression? If that’s not the key to a fantastic evening then I don’t know what is.

More like this
This 'Anatomy Of A Scandal' Star Has Joined The 'Bridgerton' Family
By Sam Ramsden
'Gentleman Jack’s Cast & Crew Are Keen On Season 3, Too
By Frances Stewart
The 'It's A Sin' Creator Revealed A Massive Detail That Didn't Make The Final Cut
By El Hunt
Grey's Anatomy Fans Refuse To Accept Kaimelia's Shocking Relationship Update
By Brad Witter
Get Even More From Bustle — Sign Up For The Newsletter