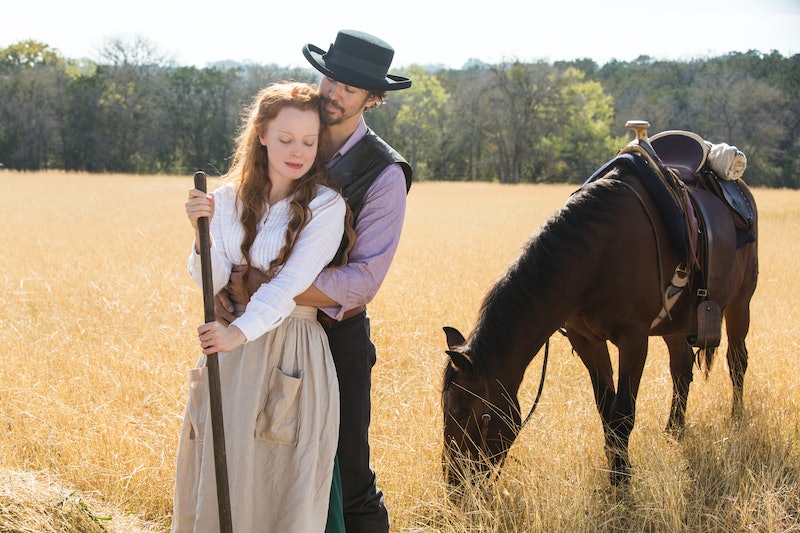 When I think of Lifetime, I think of some greatly outrageous, can't-stop-watching, stories about love, betrayal, and revenge. And although those concepts all arrive in Lifetime's newest project — reported to be a backdoor pilot — Deliverance Creek, it is hard to feel like you've seen the story before, even though it takes place in one of the most recognizable times in history. So why is Lifetime now deciding to tell a period piece drama? Nicolas Sparks —yes that Nicholas Sparks — who serves as an executive producer on Deliverance Creek , explains in a conference call with reporters, "Like many people who live in the South, I’m drawn to the history on the Civil War and you know little by little this story of Deliverance Creek came together and it was very exciting for me because in some way it was new."

For those of us familiar with Sparks' work, it might come off as a surprise that he is venturing outside of coastal North Carolina, and abandoning the pretty boy breakout actors such as Ryan Gosling, Zac Efron, or Channing Tatum, for a grittier and dirtier tale. But beyond the setting — a border town caught in the political crosshairs of the Civil War — Sparks says he was able to "explore everything from betrayal and love and frustration and revenge," which are often absent from his novels.

Beyond Sparks examining concepts he usually doesn't get to in his writing, the stars of the project are equally excited to explore a time period like the 1860s. Lauren Ambrose, who portrays Belle Barlowe — a single mother willing to do whatever it takes to defend her family — explains in the conference call, "It’s been my dream to be in a western, to be able to wear all that and have a big gun and a big hat and a big horse and be like [this] take no prisoner (house) lady in the Civil War era locking it down, keeping that ranch at close."

But transforming into a woman with a "big gun," "big hat," and "big horse" doesn't come easy, as Ambrose explains, "They even sent a cowboy to my house to teach me how to ride western a little bit."

For Christopher Backus — who describes his character Jasper in a separate interview as "on the wrong side of history" (he plays a Southern Confederate) — acting in a western such as Deliverance Creek allowed him to live out a childhood dream. "When you're a little boy, you basically go out in the backyard and play cowboys and Indians even before you make up being an actor. So when you become an actor, it is immediately that genre of film that you want to jump into," he says. "The imagination has been set in place from your early childhood, so it is always excited to go ride horses, and shoot guns, and play in that little backyard."

On set, the cast completely transformed and even went through an "intensive cowboy camp" as Backus explained it. And because iPhones were just a jumble of letters in 1860s, cell phones were left off set for Backus, who instead carried around a "15-pound gun belt."

You can watch Sparks, Ambrose, and Backus send viewers back in time on Sept. 13 when Deliverance Creek airs on Lifetime at 8 p.m.