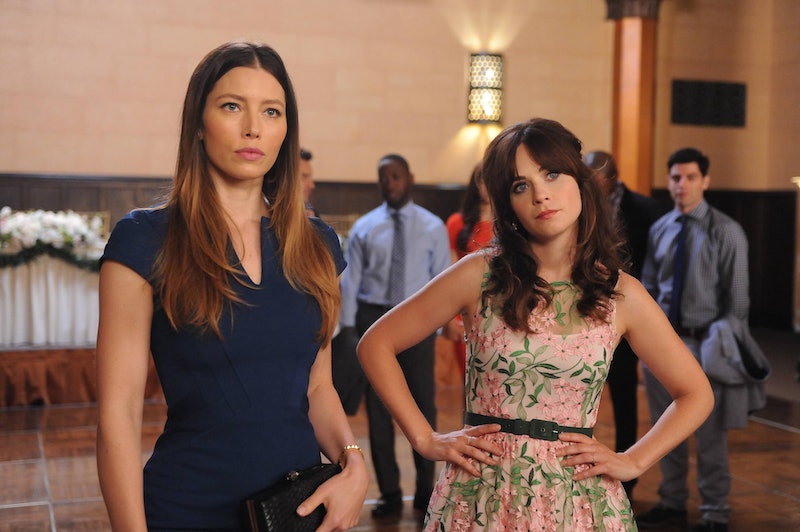 It's a tale as old as time. When New Girl Season 4 premieres on Sept. 16, Jess and another, guest-starring, Jess will fight over the same guy at a wedding. OK fine, the other girl's name isn't actually Jess on the show, only IRL — Jessica Biel will guest star on New Girl Season 4's premiere where she'll play Kat, a scientist and Jess' competition for the eye of the best man at the wedding. On Thursday, FOX released new stills from the New Girl Season 4 premiere, titled "The Last Wedding," and a synopsis that prove that finding Jess a new man in Season 4 isn't going to be easy. Because Jessica Biel is always there to steal the cute best man at the wedding. (Damn it.)

The photos, obviously and unsurprisingly, pit Biel's character and Zooey Deschanel's Jess against one another as they try to lockdown the best man, Ted, who happens to be played by Veep's adorable Reid Scott (SWOON). According to the Season 4 premiere's synopsis, Jess and the rest of the gang make a pact with one another to "get lucky by night's end." So, Jess sets her sight on the only guy in the room more adorable than Nick and goes for it until Biel steps in and asks for a dance.

Will Jess get the guy? Here's what we can predict from "The Last Wedding"s stills:

And it'll go well for a little while, at least.

Jess isn't the only one trying to get lucky at this wedding anymore and she's got some well-rounded, beauty-and-brains competition.

And Schmidt will have to be all like, "Um no."

Jess & Kat Will End Up Agreeing About How Cute Ted Is

Before they realize that they'll ultimately have to have a fight-to-the-death.

You Can't Really Blame Them, Though

It's only fair, Jess already laid the groundwork on this one. And she needs this to continue her journey of getting over Nick.

But Kat Will Sneak-Attack & Ask Him To Dance First

As you can see, Jess will not be pleased. Because this is, like, against the rules of feminism.

The Gang Will Wait For Jess' Next Move

Lovingly, of course, because this is so something that'd happen to Jess. And it'll probably be to just stick her tongue out and wait for Kat's dance to be over before she can get her fair share of time with the best man. In the absence of photos of Jess and Kat's impending altercation, I'm choosing to assume that Jess will take the high road — unless she decides to make gagging sounds until Kat has to walk off the dance floor or pretend to faint so the best man will come to her rescue. (Both of these seem more likely.)

But, Ultimately, Jess & Kat Will Both Fail

Because Ted will ultimately choose neither of them, at which point Jess and Kat will join forces to tell him how big of a jerk he is. And that just because he's good looking, doesn't mean he can play with people's emotions. #Burn #GirlsRock.

More like this
20 Photos From The 'Stranger Things' Season 4 Premiere To Make You Feel Old
By Alyssa Lapid
Will Shoresy Get A Season 2? What To Know
By Kadin Burnett
Everything To Know About A Possible Season 3 Of 'The Flight Attendant'
By Gretchen Smail
Everything To Know About 'Grey's Anatomy' Season 19
By Brad Witter
Get Even More From Bustle — Sign Up For The Newsletter