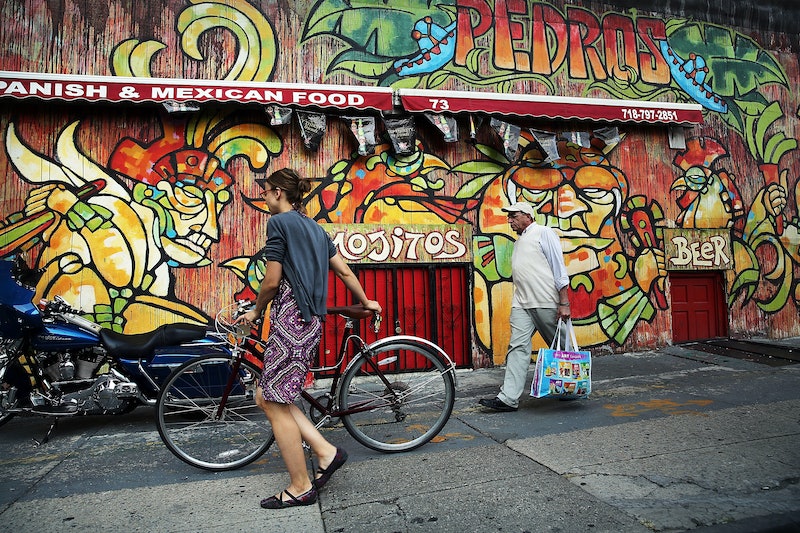 The flip phone enthusiast and fashion overlord Anna Wintour has signed off on a significant paradigm shift in what it means to be cool. In its September issue, Vogue crowns the 15 hippest neighborhoods worldwide with a few unexpected selections among its United States picks. Gone are the days of Vogue’s traditional archetype of beauty. Forgotten are the billowing gowns shuffling in and out of moody bistros in the West Village. Out with superfluous lavishness, in with artisanal repurposing. Among its picks of top U.S. neighborhoods? Wynwood in Miami, Silver Lake in Los Angeles, and Bushwick in Brooklyn.

Wynwood was lauded for its open air graffiti museum, and its inclusion was no doubt influenced by the fact that Art Basel has become a hot spot for fashion’s elite (Its guest lists for after parties are among the year’s most coveted, ranking alongside events such as Sundance or Cannes). Los Angeles’ Silver Lake seemed an obvious choice as well, with Vogue dubbing it a “chilled-out antidote to the over-the-top glamour of Beverly Hills and Hollywood.”

Bushwick, however, seemed an interesting pick for the Manhattan loyalists at Vogue. DUMBO has been a hot spot for recent NYFW runways from heavyweights like Alexander Wang, and Williamsburg has been touted as “hip” in the media more times than most Brooklynites would care to recall. But Bushwick still maintains some pretense of an artist’s Mecca, even despite its gentrification yielding remote gallery offshoots from well known Chelsea white boxes, countless vintage boutiques, and an ever-expanding restaurant and nightlife scene.

Pop culture phenomena like Girls and Broad City have perhaps been instrumental in rebranding Bushwick as a hub for creative young people in much the same way that Portlandia did for Oregon. And perhaps a Vogue stamp of approval will chafe the egos of some of the neighborhood’s residents, but there’s something to be said for a shift in the way a magazine with a readership like Vogue’s categorizes "hip," branding environments with high outputs of creativity as a standard for what we find interesting in young people.

More like this
How To Master Baby Braids, According To TikTok
By Tomi Otekunrin
11 Trends From The ‘90s That Made You Feel So Cool
By Julie Sprankles
Are Gemini & Cancer Compatible In A Relationship?
By Kristine Fellizar
5 Crystals To Manifest More Money
By Megan McCarty
Get Even More From Bustle — Sign Up For The Newsletter