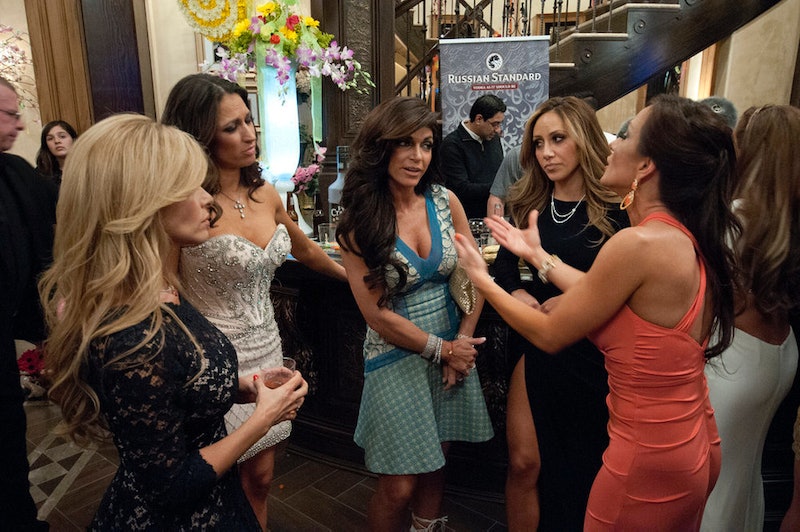 While it's already been tough for new Real Housewives of New Jersey cast member Amber Marchese to fit in with the close-knit group of ladies, she hasn't made it easy by sparking fights and gossiping behind their backs. But while she's constantly attempting to mend the relationship between her and the rest of the group, her husband, Jim Marchese, is spreading rumors about Nicole Napolitano's boyfriend Bobby, claiming that their relationship was faked. Then, after last week's episode revealed that Bobby rebuffed Amber's attempt to reconcile, it doesn't seem like the Marcheses and the twins will be getting along anytime soon.

Jim, who's already made his impression on the cast by jumping into the season with hostility for just about everyone, hasn't stopped running his mouth now that the season has wrapped and he's been booted from appearing at the reunion. He's had open contempt for Joe and Teresa Giudice, claiming that his job working as an advisor on mortgage fraud cases makes hanging out with them a conflict of interest.

What's interesting is that Jim is far from perfect when it comes to legal respectability. The New York Times reports that he used to work for a drug company, Cell Therapeutics, that illegally claimed it was FDA-approved to treat a large number of cancer patients. Jim attempted to become a whistleblower and cooperate with the Justice Department, entitling him to a large payout, only to be accused of proposing and running the entire scheme from the beginning and losing the shot at millions of dollars. So not that savvy from a guy who claims to have the moral high ground over Joe and Teresa.

The Marchese family drama is getting so intense that it's wrapping in other Housewives who weren't involved in the conflict. Dina Manzo tweeted her disapproval at Jim for getting into the Housewives' business.

Jim chose to respond via reality TV gossip blog RumorFix, saying "Did Dina really think that no one was going to ask Teresa what was going on when we literally were watching the news and getting reports that she was having legal troubles? What’s the point of the show?" And yet in the Sept. 7 episode, Amber had an over-the-top tearful conversation with Teresa that may have been a genuine response to the news of their guilty plea, but seemed like a calculated attempt to remain in Teresa's good graces.

To make a long story short, the Marcheses seem perfect for one another. They love to manipulate their fellow Real Housewives of New Jersey and at this point, it's impossible to see the line between who's a genuine friend and who's just a pawn in their game. And it's a dangerous game, since the women on this show are usually more like blunt objects than chess pieces. If Amber and Jim want to walk away from this season without their darkest secrets — which aren't kept that secret, considering the NY Times covered it — revealed, they may want to tread a little bit more lightly.