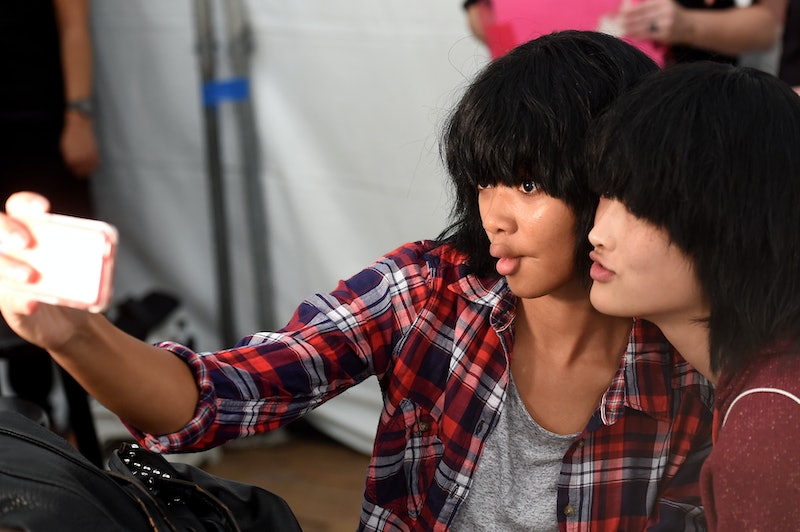 The frenzy of Fashion Week is over; now it's time to test your knowledge and figure out just what to take away from the endless parade of innovative looks and trend overload. However, weeding out the unimportant can be daunting in the face of 168 hours of fashion. I wouldn't be surprised to learn of post-Fashion Week bouts of forgetfulness or confusion after viewing multiple shows per day and attempting to cut to its most essential lessons. Added on to the usual delirium of the week is the fact that Fashion Week came early this year, slapping New York City awake directly after a quiet summer and its concluding Labor Day Weekend.

For those who are lost in a sea of ruffled dresses, pastel prints, and celebrity selfies from the front rows, here is the definitive list of lessons to take away from New York Fashion Week. Some lessons seem so simple that they should have been innate all along (Anna Wintour's vice grip on not just the fashion industry, but the world at large), and some were entirely unexpected (crop tops are now anticipated to be a year-long trend? Who could have predicted that?). So take out your legal pad and pen or pull up your Notes app on the iPhone, because here are seven pearls of wisdom to take away from Fashion Week.

1. IT'S TIME TO WHIP YOUR SKIN INTO SHAPE, BECAUSE MAKEUP IS OUT

From J. Mendel to Marc Jacobs, a number of designers decided to forsake statement makeup in favor of a barefaced, #IWokeUpLikeThis look. While it's not time to jettison your entire cosmetics collection just yet, the Fashion Week trend may be the perfect excuse to tend to that part of the routine you've been neglecting: skin care. Find an exfoliant you love, moisturize obsessively, and spritz your way to luminous skin, because come Spring 2015, you may not see nearly as much makeup out and about.

It seems like just yesterday that Miley Cyrus was causing worldwide hysteria as she twerked with Robin Thicke at the 2013 MTV Video Music Awards, but in fact it has been a year. No matter, because Cyrus is just as present as she was in August of 2013. From baring nearly all of her bust at Alexander Wang's after-party to appearing in the finale of Jeremy Scott's show, Cyrus can't stop and won't stop infiltrating the fashion industry with her wild, wild ways.

3. ANNA WINTOUR IS MORE INFLUENTIAL THAN ANYONE IMAGINED

The editor created a worldwide media sensation with her flip phone, convinced an innocent showgoer to cut her hair with a few well-placed comments, finagled $200,000 out of Condé Nast per annum for her wardrobe allowance, and still can't be bothered to do things the average layperson would leap at (take a selfie, chat with top models, etc). This Fashion Week proved that Anna Wintour has power the rest of the fashion world wouldn't dream of.

Spring 2015's collections set trends the world won't see until next year, but if the runways were any indication, crop tops will still be clinging on for spring. On March 20 of 2015, otherwise known as the Spring Equinox, prepare for your abs to be on display once again. Unless you dare to defy the likes of Erin Fetherston and Lela Rose, you'll wear crop tops and you'll like it.

5. BRIGHTS AND PRINTS ARE IN...BUT SO IS BLACK AND WHITE

Designers from Ralph Lauren to Naeem Khan showed brilliant pops of crimson, cerulean, orchid, and lemon on the runway. However, vivid brights were tempered by chic, graphic black and white ensembles on runways from Lela Rose to Proenza Schouler. Thankfully, this stark contrast means that Spring 2015 has a trend for everyone, whether you hoard black-and-white checkered ensembles like they're going out of style or refuse to shake your addiction to brights.

6. YOU CAN GET AWAY WITH FLAT SHOES THIS SEASON (KIND OF)

After months of anticipation surrounding the advent of the flat-shoe trend, it appears the look has finally hit at Fashion Week. Street style bloggers were snapped in every incarnation of the trend from flats to sneakers and kitten heels. However, these looks were interspersed with Fashion Week's stereotypical, sky-high stilettos and cage booties, and the runways were likewise populated with teetering models in four-inch pumps. It appears that while flat shoes are a burgeoning trend, you would do well to keep your heels on hand, just in case.

7. DESPITE THE RECENT IMPROVEMENTS, FASHION WEEK IS STILL THE SAME

Lincoln Center may not be the sole headquarters of Fashion Week anymore and shows may be more exclusive than in years past, but the spectacle is still the same flurry of action populated by esteemed editors, nonsensical street style ensembles worn by hopeful bloggers, and mecca of creativity it has always been.