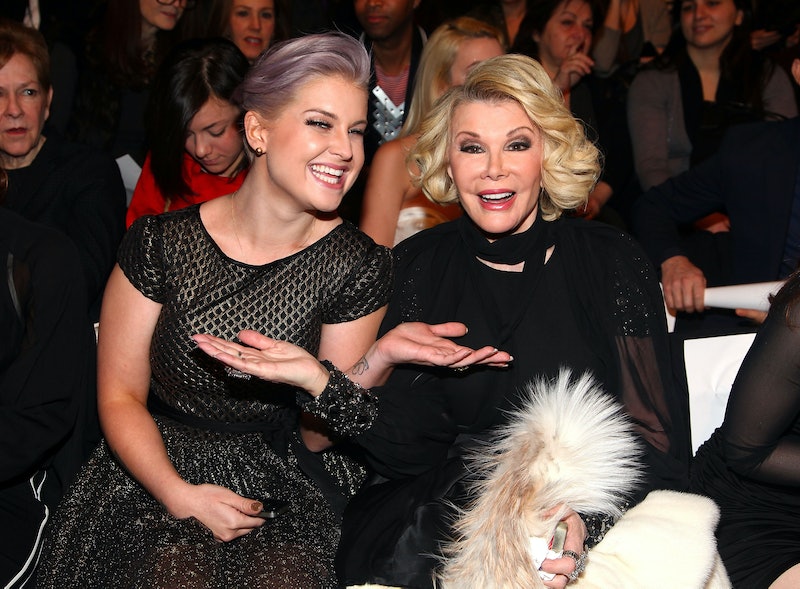 Update: Per a statement from E!, Fashion Police will return on January 12. Earlier: Two weeks following the tragic loss of Fashion Police host Joan Rivers, it is still up in the air as to when or if the show will continue without her. Joan Rivers was irreplaceable, yes, but she left behind legacy that won't and shouldn't soon be forgotten. The question isn't so much whether Fashion Police should continue without Joan, but more-so who could deserve the honor of taking her seat as host. Although Melissa Rivers proved she had her mother's ear for humor when she spoke beautifully and hilariously at the service, I think it's Kelly Osbourne's time to shine.

The best way for Rivers fans (or Joan Rangers, as she liked to call them) to remember her is for the show to go on even in her absence. There's no doubt that Rivers' legacy will live on through the show that she created if E! chooses to continue the series, speaking on behalf of the entertainment industry through the eyes of fashion. All the show needs is a familiar face and a little extra laughter. Doesn't a sweet, British accent always make things just a little bit funnier?

Osbourne called Rivers her teacher, her therapist, her closest friend and the only grandmother she ever knew. Throughout Osbourne's time on Fashion Police, Rivers served as a mentor to her, practically molding her into the host we know she can be.

Melissa Rivers has hosting experience covering red carpet events and is also producer on the show. She has co-hosted before and proved she has the sense of humor to fill her mother's shoes. It would make plenty of sense to offer her the position to host, alongside Osbourne, Giuliana Rancic and George Kotsiopoulos. But I think the show would benefit more from pulling one of Rivers' own mentees into the spotlight.

According to Osbourne's statement at the time of Rivers' death, laughter is what Rivers gave us and laughter is what she would want us to do in remembrance of her. Some may think Osbourne isn't fashionable or funny enough to play the part. Some may think Melissa is more well-suited for it. And others whole-heartedly believe that E! should completely shut its doors on Fashion Police. But Osbourne said it herself: the laughter must go on.

Osbourne has the experience, she has the voice, and she has the fans (as she proved when she came in third on Dancing With The Stars). Now it's up to her to embrace the lessons she learned from her boss and friend and find her own voice in the industry.