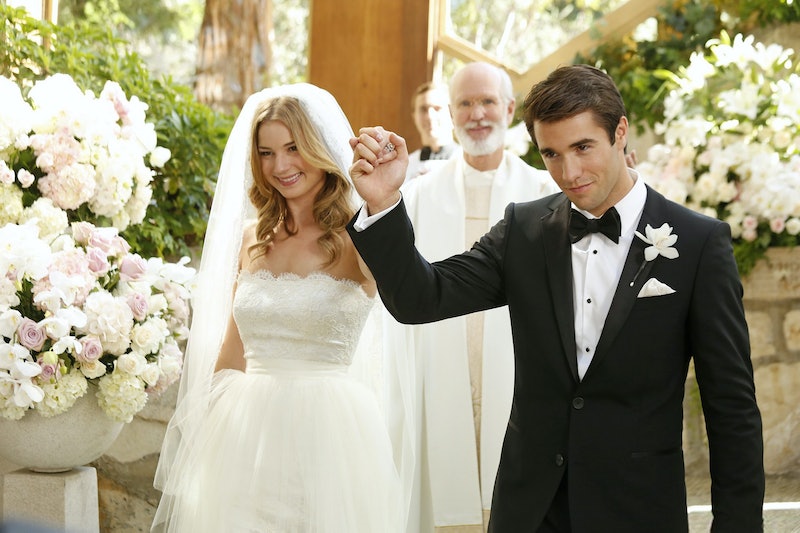 I absolutely adore Emily Thorne, but the girl has some serious problems. Her quest for vengeance — on both her father's wrongful imprisonment and, now, Emily's lover Aiden's murder — has made her a walking force of destruction, and while I can't say that the Graysons don't deserve to feel the pain they've so carelessly inflicted on others, I can't help but think of that proverb about revenge: Before embarking on a quest of revenge, dig two graves. If the proverb is accurate for Emily in Revenge Season 4 — in the case of Aiden, it was dead on — she may not get her ultimate "happy" ending. But what is that for Emily, anyway? We have wanted Emily to succeed for three seasons, and yet we still don't know what happy would look like, for her, when Revenge finally ends.

We know what Emily wants in her heart of hearts, and that's a family of her own. I never thought of Emily as a particularly maternal, but it became obvious that she wanted to have a child of her own after Victoria told her she could no longer have children. The injuries she sustained from her wedding night gunshot wound had squashed that possibility. While Emily did plan on running away with Aiden after faking her death — a plan that, obviously, didn't pan out — we haven't heard much about what Emily wants after this quest for revenge is over. So, what would a "happy ending" for Emily look like? Here's how Revenge could end on a high note for our heroine — along with my handy assessment of the likelihood of happy actually happening:

Emily Ends Up With Jack

Why It's Her Happy Ending: Emily and Jack may not be romantically entangled right now, but they always knew that there was something between them. Jack lost Amanda, the great love of his life, and Emily lost Aiden, the great love of hers — it would be poetic for them to end up together once everything is said and done. Things never worked out between Emily and Jack for a million reasons (and I hope that they do not attempt romance while they are still involved in the "let's take down the Graysons" scheme) but if the dust ever does settle in the Hamptons, these two might be able to make it work. Emily could help raise Carl and have the family she always wanted.

Is It Likely? It does seem like the show wants Emily and Jack to get together at some point — they've built up the tension between them from the first episode. Emily may not be able to have children of her own, but Amanda Clarke was like Emily's own sister — it would make sense for Revenge to end with Emily raising her pseudo "nephew," thereby bringing her desire for a family full circle.

The Graysons End Up Behind Bars — For Good

Why It's Her Happy Ending: Emily successfully put Victoria in a mental institution, but that won't stick. Emily's happy ending involves punishing the Graysons, and I don't know if she'll ever be happy until they suffer the consequences for their actions against her father. The Graysons committed a number of crimes that could put them away for a very, very long time. Emily's happy ending could be watching the Graysons squirm behind bars for the rest of their lives.

Is It Likely? Emily's brand of justice was never as black and white as the legal system makes it seem. Sure, the Graysons deserve to go to jail, but if that's their only punishment, then Emily's quest for revenge would just seem, well, dull. I don't think the show would give us such an uninspired end to Emily's seasons-long quest.

Why It's Her Happy Ending: Emily isn't all sunshine and rainbows, and she might take some joy in knowing that the Graysons are no longer her problem. I can't see Emily murdering the Graysons — I think she would have done it already if that was her plan — but if the Graysons were to be killed by an outside force, I don't think that Emily would mind. It wouldn't be Emily's plan, but part of me thinks that Emily might feel slightly relieved to know that her greatest enemy can't hurt her anymore — especially if she learns that her father was alive the entire time.

Is It Likely? Considering that the show already killed off Conrad Grayson (well, probably) it's possible, but not completely likely. If another Grayson goes, I have a feeling it will be Daniel — but I imagine that the show will keep Victoria around for quite a long time. Could she die in the very last episode of the series? It's possible, but I secretly hope not — she's too good of a villain to dispose of carelessly. If she dies in the series finale, it better be epic.

David Clarke Rises From The Dead

Why It's Her Happy Ending: Technically, Emily's father was never actually dead — but she thought he was for years. Could knowing that her father didn't die because of the Graysons be enough for Emily to end her quest for revenge and live a normal, happy life?

Is It Likely? It would certainly be the ideal situation — if only Emily Thorne's life could be that simple. Considering that we have at least one more season to go, it's doubtful that Emily's life could turn around that quickly. Plus, David doesn't seem like the optimistic dad we saw in Emily's flashbacks — he seems downright dangerous, and that might pose a big problem for Em.

More like this
The Time Traveler’s Wife Book Has A Heartbreaking Ending
By K.W. Colyard
These 'This Is Us' Finale Theories Will Make You Weep
By Brad Witter
Twitter Got *Very* Emotional Over 'The Split’s “Perfect” Finale
By Sam Ramsden
The 'Ozark' Series Finale Killed Off A Fan-Favorite Character
By Brad Witter
Get Even More From Bustle — Sign Up For The Newsletter