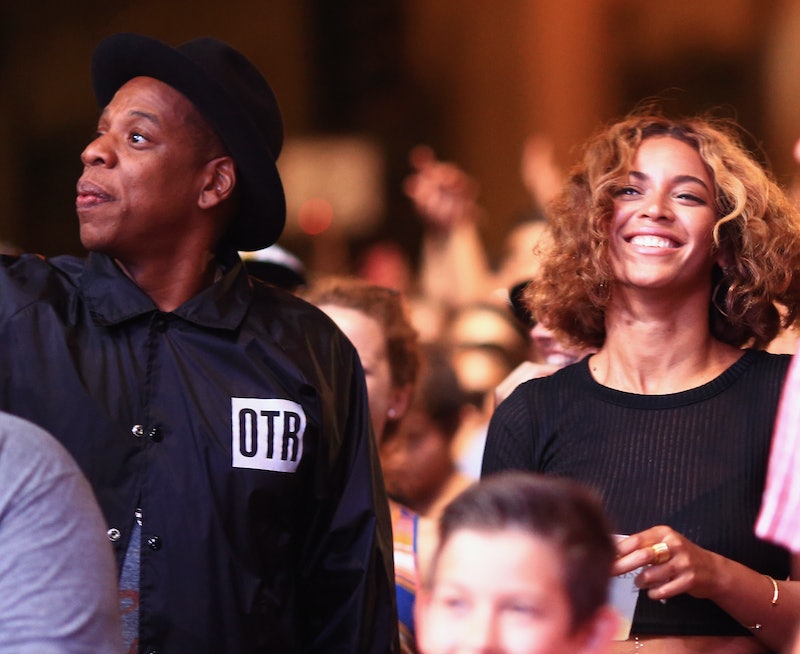 Instead of Watching the Throne, Beyoncé and Jay Z should consider putting a spin on that title by naming their next joint tour Watching the Womb in which they address Beyoncé's mysterious perpetual pregnancy. At this point, I've lost track of how many times she was supposedly with child — and that's reason enough for me to give a stern side-eye to the reports that Jay Z supposedly announced Beyoncé's pregnancy at their second On the Run show in Paris on Friday night. Based on the nifty translation skills of some French fans, Jay switched the lyrics to his song "Beach Is Better" to say, "'cause she pregnant with another one."

Okay, so there's a huge margin for error. Just think about the last time someone interpreted a simple lyric change during a Bey and Jay performance. I didn't believe she was referencing her marriage to Jay Z then, and as far as I'm concerned, I'm taking this latest announcement with a grain of salt — at least until I see official confirmation that Blue Ivy will have to make room on her father's lap for another sibling.

While some may have scoffed at the absurdity of Beyoncé's father, Mathew Knowles', Jedi mind tricks theory (in which he claimed the infamous elevator scuffle between Solange and Jay Z was staged), this latest rumor makes me want to sign up for that class he's teaching called Beyoncé Bootcamp 101 — or something along those lines. While I certainly don't buy Papa Knowles' claims that the infamous billion-dollar elevator shitstorm was staged, I am wondering whether this pregnancy story is an example of the very mental manipulation of which he spoke. I'm just sayin'...it totally ruins that On the Run HBO special they're filming, and the Carters don't strike me as the type to spoil surprises.

But one thing's clear: Even if it is the result of some clever PR manipulation from behind the scenes, it'll definitely have more people tuning in when the special airs.