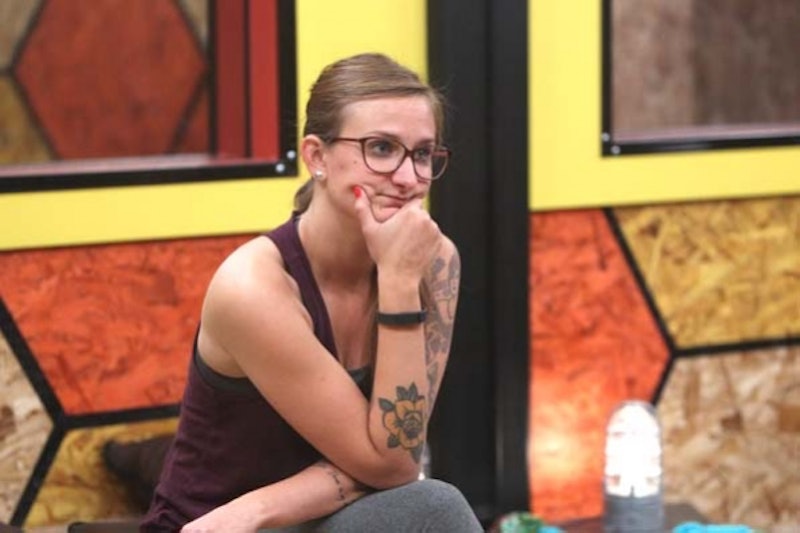 If Frankie Grande doesn't end up winning some sort of prize for being the least-liked person on Big Brother, then the prize would probably go to Christine Brecht. At the beginning of the season, we all thought we hated Devin, but Devin was gone so quickly that he's just a distant memory now. Frankie and Christine, on the other hand, lasted too long, betrayed too many people, and did too many things that put a bad taste in people's mouths. However, Christine was evicted from Big Brother sooner than Frankie and it's really starting to hit her how few friends she had left among the house guests. In fact, the amount of hate that Christine is getting is starting to seem excessive.

The first sign that Christine wasn't exactly America's Favorite came when she was evicted. When she walked out of the house, Christine was loudly booed by the audience as she sat down next to Julie Chen, so loudly that the house guests could hear it and discuss it for a long while afterward. More than anything else, Christine got hate from the audience for her relationship with Cody Calafiore which had crossed the boundaries of good taste into downright inappropriate considering the fact that Christine is married to the most awesome guy in the world. So, yeah, it's safe to say that the audience isn't fond of Christine.

Then there was the time that Christine made her way to the jury house. Everyone was seated out on the patio, talking and having a good time with each other, when she walked in. It was beyond awkward. None of the jury members greeted Christine or even looked at her, leaving her to find somewhere to sit and some way to cut the sudden and heavy tension. They were apparently willing to watch recaps of the show with her, but it's clear that Christine wouldn't have won the money if it was down to the other jury members to vote for her.

Finally, the jury members returned to the Big Brother house for a luxury competition and obviously Christine was with them. Spoilers ahead. Apparently, each house guest had to choose a jury member to compete with. No one chose Christine. In fact, Christine had to play by herself and was eliminated from the competition early, according to Big Brother Daily. So, it seems that Christine is hated by the audience, hated by the other members of jury, and hated by the house guests she left behind. Am I the only person who's starting to find this a bit much?

Don't get me wrong. I think Christine behaved inappropriately in her "close friendship" with Cody and it makes me feel very uncomfortable having to think about her husband watching that. I was angry with her when she turned on Nicole and the Nicotine friendship and I knew the guys would turn against her eventually. However, the fact that Christine is getting the cold shoulder from everyone in and out of the house is a punishment that doesn't match her crime. Frankie has done and said way worse things than Christine has, in my opinion.

If Frankie or Cody aren't treated with the same amount of disdain and rudeness as Christine has been since the moment she stepped out of the house, then I'm getting ready to call misogyny. It's not fair for Christine to shoulder all of the blame for her affectionate relationship with Cody when he let it happen even knowing she was married and it's not fair for Christine to be hated for her game moves when Frankie has made more underhanded moves more frequently. She's not my favorite Big Brother house guest in the slightest, but she doesn't deserve this much hate.

More like this
Everything We Know About Chèrie & Jessey’s Abrupt Exit From Bling Empire
By Alyssa Lapid
What’s New On Netflix: A Victoria Justice Rom-Com & The Return Of David Letterman
By Arya Roshanian
Twitter Is Upset About The 'American Idol' Top 3 Results: "Who TF Is Voting?"
By Jake Viswanath
Stormi Just Walked A Red Carpet With Mommy Kylie Jenner & Daddy Travis Scott
By Hugh McIntyre
Get Even More From Bustle — Sign Up For The Newsletter