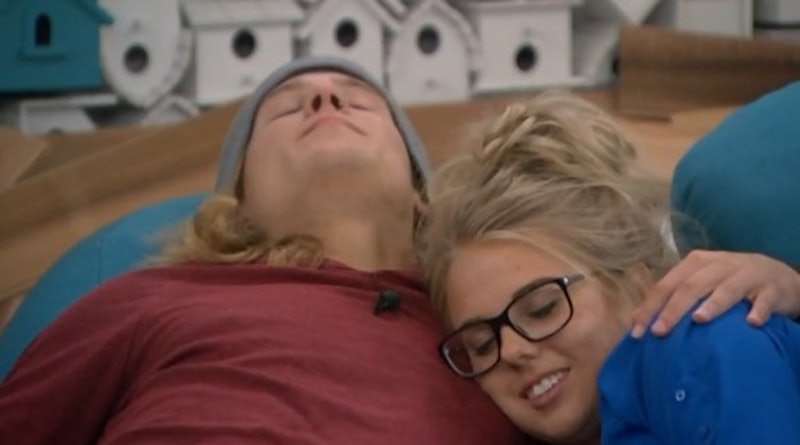 There's no live feeds on the ousted Big Brother houseguests in jury, so it's always a treat when we get to see what they've been up to. This usually happens in the form of a short segment during a live eviction episode. However, during Sunday night's episode of Big Brother, we had the pleasure of seeing the jury members return to the house. But even better than that, Nicole and Hayden's cuteness was in full force, and we will all have sweet dreams as a result tonight.

Since Nicole and Hayden have been in the jury house, their romance has really bloomed. Earlier this season, upon Nicole's first arrival in the jury house, she and Hayden shared a lovely smooch as the sun began to set. Perhaps it's because they know every move they make won't continue to be broadcast to all of America or the fact that they no longer have the stress of trying to win the game, but whatever it is, I'm sure glad it's happened.

While I was content knowing that things are heating up between the two, I didn't have high hopes for their return to the Big Brother house with the other jury members. They're only going to be back for a short time. What could they possibly do? Oh, how wrong I was.

As the jury members entered the house, they proceeded to wreak havoc on it by throwing their clothes on the ground, dirtying up their dishes, and pouring out Froot Loops on the ground (Thanks, Zach!). Even though the remaining houseguests watched in horror, it was only about to get worse for Cody as Nicole and Hayden kissed, just for him. Remember when Cody seemed to have a thing for Nicole way before his flirtmance with Christine happened? Yeah, they were referencing that.

So the jury members weren't just there to piss off the remaining houseguests. It was a luxury competition to earn one of them a little cash and one of the players a little cash. The jury members competed to find little "Knockout" chips hidden throughout the house to take their competitors out of the game until only one was standing.

Interestingly enough, the remaining houseguests had to bet on which of the jury members would win the whole enchilada. Frankie of course picked to bet on Zach, but surprisingly, Cody chose to bet on Nicole and not Christine, who ended up not having anyone bet on her. That hurts from all sides.

Nicole was a beast, finding more "Knockout" chips in the house than any other player. It was down to Nicole and Hayden at the end, and he found his first and the last chip, winning the competition. At first, it looked like he was going to take himself out of the competition and let Nicole have this one. How chivalrous. But then Nicole told him not to, and she told him she would kiss him. So Hayden won some cash in the end, and still got to keep the girl. Who needs to win Big Brother when you have that?