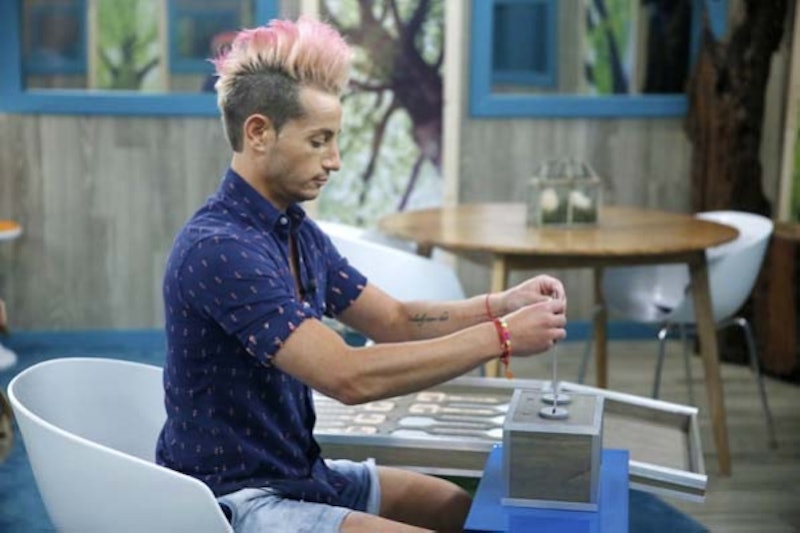 For those who have been waiting the entire summer for Frankie Grande to be evicted from the Big Brother house, you might be in luck, as it seems he is heading out the door on Tuesday's special eviction episode. For those of us who were disgusted with Frankie's rape comments towards Victoria, and were even more mad when the comments weren't aired on Big Brother, it feels like a long time coming.

But this week things are quite different for Big Brother, as Thursday nights are now all about football, and this week, the show's schedule has been shifted to Sunday, Tuesday (with eviction), Wednesday, and Friday. It's all very odd on CBS' part. So what does that mean for live shows? Well, because an eviction is happening Tuesday, you would assume that it would be live, correct? Well, you assumed wrong, at least according to BB_Updates on Twitter, who informed followers Monday morning that Tuesday's eviction — or Frankie's eviction — won't be live, and is being recorded Monday evening. All of this means one important thing: Frankie might not have a studio audience to boo him when he leaves the house.

Maybe I am getting ahead of myself, assuming Frankie is going to be booed when he leaves, but isn't that what we are all expecting at this point? If Christine was booed the way she was, Frankie is sure to be booed, right? I'm not supporting booing a person, but Frankie is so delusional about what the fans and viewers of Big Brother think about him, that it would really encourage his delusion if he were to leave the house and meet Julie Chen in a peaceful, quiet, boo-less studio.

Fans are definitely a little annoyed that Frankie might not have to face the same fate as Christine had to during her live eviction, even thinking that it could be CBS protecting Frankie — something fans have been accusing them of a lot this season.

But it is important to note that this usually happens with the fith place evictee. In years past, the person being evicted in this place is usually shown the following day for scheduling reasons, as a live eviction is aired the day after that. This just happens to be a really unfortunate coincidence.

More like this
Everything We Know About Chèrie & Jessey’s Abrupt Exit From Bling Empire
By Alyssa Lapid
When Was 'Bling Empire' Season 2 Filmed?
By Alyssa Lapid
There's Plenty Of Drama Brewing To Warrant A 'Summer House' Season 7
By Brad Witter
Kourtney & Travis Crashed His Daughter’s TikTok Live In Their 2nd Wedding Outfits
By Grace Wehniainen
Get Even More From Bustle — Sign Up For The Newsletter