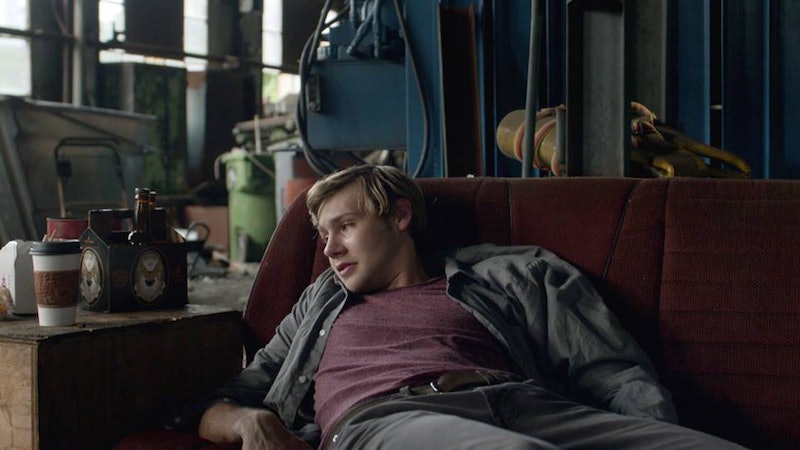 I know this is so not the time to be wondering about Crash, but how could we not? Between Carter getting kidnapped and Max becoming the biggest jerk of all time after the shooting, it probably surprises you that Crash is even an issue in my mind. I mean, LORI KIDNAPPED CARTER AGAIN in the Finding Carter Season 1 finale — that's totally more important than Crash, right? Yes and no, because the fact remains that Crash shot Max. And on Tuesday night's finale, Elizabeth brought up Crash's arraignment and asked Carter if she planned to go, only for the show completely forgot about him. You can't expect me to not wonder whether fans will actually get #JusticeForMax (yes, I'm still trying to make that hashtag happen).

During Finding Carter's penultimate episode last Tuesday, fans saw Carter finally do the right thing when she led the cops directly to Crash. She tried to convince him to turn himself in, but when he refused, she allowed the cops to cuff him and put him in the back of a squad car. (Mind you, this was totally chilling because Crash wasn't affected AT ALL by these events.) Carter obviously wasn't going to let him run away to California after almost killing her best friend, that'd just be wrong. So, what's going to happen to Crash now that the raging sociopath is safely behind bars?

Well, your guess is as good as mine because while Elizabeth made a point to ask Carter about whether or not she'd be there for Crash, the finale completely left us in the dark. Carter didn't go to Crash's arraignment and she probably won't get to now that Lori's drugged and kidnapped her for whatever twisted reason she's got. Now, I'm no expert of the justice system — I mean, I've seen some episodes of Law & Order: SVU, of course — but there are clearly two ways this can go: Crash pleads guilty or Crash pleads not guilty.

Considering that he ran, didn't turn himself in, and has a criminal record already, things aren't exactly looking good. But maybe, just maybe, if Crash explains his side of the story to the police like Carter suggested, he might not go to prison forever. I mean, I want #JusticeForMax more than anyone, but we have to look at what makes sense here. Having Carter miss his arraignment because she's been kidnapped and the fact that Crash did, in fact, actually shoot Max set us up for Finding Carter Season 2 taking a break with Crash's storyline.

Clearly there will be plenty going on in Season 2 without Crash constantly screwing things up. But I have no doubt that Crash will return, at some point, to keep things interesting around here. So for now, while we agonize about being without Finding Carter for a while, we can assume that Crash got the punishment he deserves for almost killing Max and rest easy. MTV may be able to keep characters alive through fatal shootings that would probably kill someone IRL, but they can't make up their own justice system. Especially when we need #JusticeForMax.