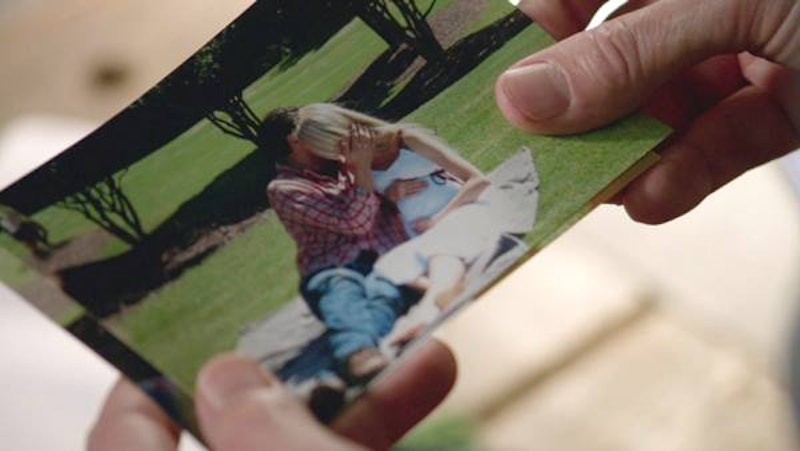 Is someone going to throw us a bone any time soon? Or at the very least, let us know whether or not David is involved with Carter's kidnapping on Finding Carter ? The show's Season 1 finale dropped another, slightly creepy hint that David and Lori have a murky past, so now we really need to know what happened there. During Tuesday night's episode, Carter used the zip code Lori left her in their old apartment to find a photo store where Lori had developed some images for her. And what she got were photos of her real parents during Elizabeth's pregnancy that were so blatantly stalker-ish, I actually looked over my own shoulder to make sure no one was watching me. So, did David and Lori have an affair gone bad? And did it actually play into Carter's kidnapping?

Tuesday night's finale put serious emphasis on "the truth." Lori claimed that David and Elizabeth hadn't been telling Carter the truth and when Carter told David that Lori came to their house under an alias, he claimed that whatever Lori told Carter wasn't "the truth." Prompting me to want to scream out loud, "WELL, IS SOMEONE GOING TO TELL CARTER THE TRUTH?" Because, really, this game of round-robin is starting to get pretty damn old and Carter's a big girl — she deserves to know.

In case you need a little refresher, this David and Lori theory began back when Carter first decided to really commit to her biological family. She confided in David and gave him the phone number Lori was expecting her to call, and David decided to give Lori a call himself. And that's when we found out that David had "underestimated [Lori] last time." Even though that was the only detail we got from their phone call, it got me thinking that maybe David's got something serious to hide.

Bustle writer Kaitlin Reilly theorized that David planned this kidnapping with Lori as a means to sell novels because he felt threatened by Elizabeth's success. But it's seeming more and more like David and Lori had an affair, because at the very least, that would explain why David said nothing about Elizabeth's affair with Kyle even though he apparently knew about it ALL ALONG. Who does that? Not a man who's never strayed from his marriage, that's for sure. Something's just off about David and how he handled Carter's return, Elizabeth's affair, and Carter telling him that Lori had been in their house.

Throughout Season 1, David seemed like he was constantly unaffected by the events in his home because he had a bigger secret to hide. And if I'm putting the pieces together correctly, that bigger secret is that he had an affair with Lori before Carter was kidnapped. So, hear me out. I think Lori and David started this affair before Elizabeth's pregnancy and when David found out that his wife was expecting, he broke it off — and Lori totally wasn't cool with that. I mean, we saw how unhinged she became when she realized that she'd actually lost Carter on Tuesday night, imagine if she thought David loved her and then he broke her heart?

Anyway, following the breakup, Lori became as obsessed with Elizabeth and David and she is with Carter now, which would explain the stalker photos of Carter's real parents in the park. And when Elizabeth finally gave birth to twins, in Lori's twisted mind, brunette Carter looked more like she could've been her and David's child, so she took her.

I know, I'm scaring you, because that's a terrifying notion. But honestly, I wouldn't put it past Lori and I really can't get her comment about being underestimated last time out of my head. If not an affair, something equally suspicious happened between Lori and David, and it's a secret that we all need to learn if there's a chance of the Wilsons getting Carter back in Season 2.