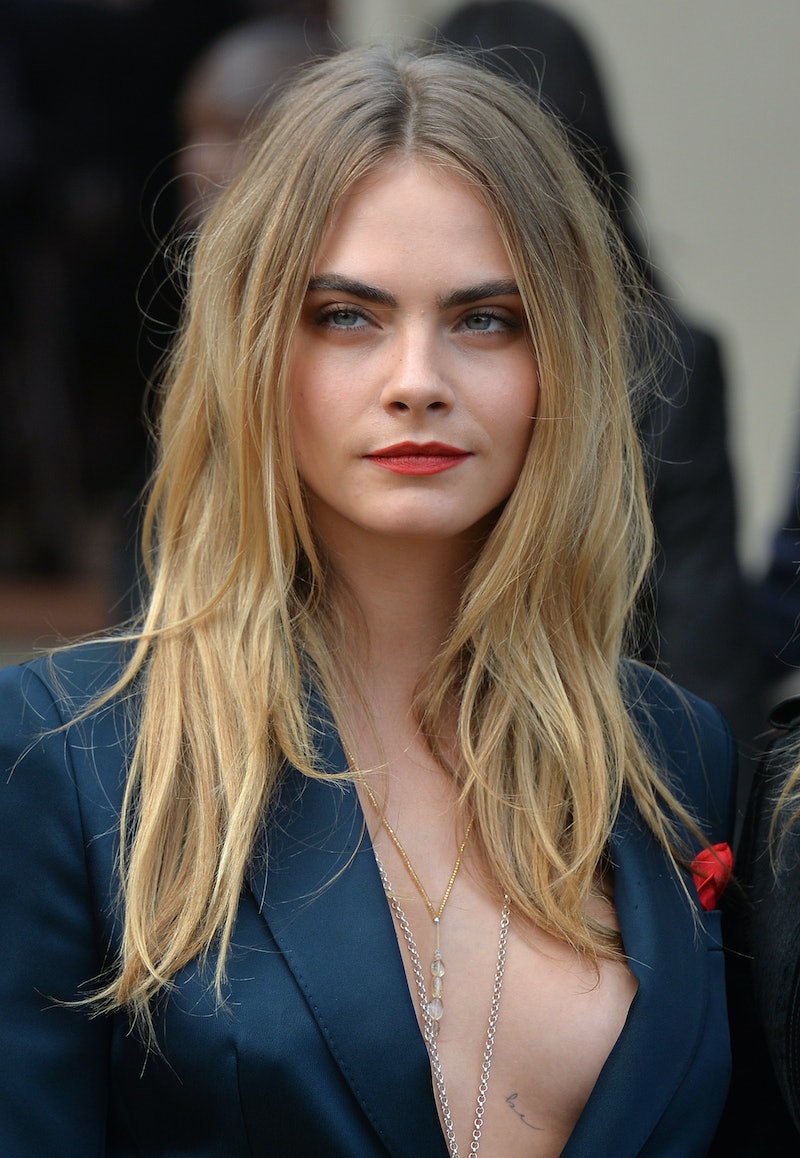 It's no secret that rising supermodel and total badass Cara Delevingne has some distaste for being in the public eye; after all, she's publicly declared her hatred for the paparazzi, and she just told ELLE.com that she wouldn't recommend being famous. But I, for one, am grateful every single day that she is, or else we would have missed out on Delevingne's seriously sexy sideboob, her impressive rise to supermodel-dom (didn't you hear? She's the next Kate Moss), and even her transition into the world of acting.

Oh and then there's all of the amazing fashion moments we would never have seen either, whether they revolve around her many graphic T-shirt looks or they're part of her beautiful red carpet style. And if Delevingne wasn't the media-hounded muse of the moment, there's also a good chance we wouldn't have seen her looking ridiculously sultry while standing next to the aforementioned Moss on the Burberry Spring 2015 front row during the latest season of London Fashion Week. And that, my friends, would have been a shame, because she sported a smoking-hot, menswear-inspired look that schooled just about everyone on how to steal from the boys and outshine the girls.

Wearing a two-piece navy suit featuring skinny trousers and a whole lot of cleavage — thanks to the lack of undershirt — Delevingne was practically sizzling in a tailored, sophisticated, and certainly sultry ensemble that you could expect to see on Ms. Moss just as easily as on her mini-me.

Pairing the look with delicate layered necklaces, a monogrammed satchel, and some killer kicks rather than a femme pair of heels, the look was an undeniably edgy expression of Delevingne's tomboy style.

Her hair and makeup, on the other hand, were 100 percent feminine, from the tousled bed-head waves and bold eyebrows to the barely flushed cheeks and matte red lips.

Not as if you needed yet another reason to obsess over the British beauty, but this look — and her ability to seamlessly mix masculine and overly feminine styles together — is definitely it.