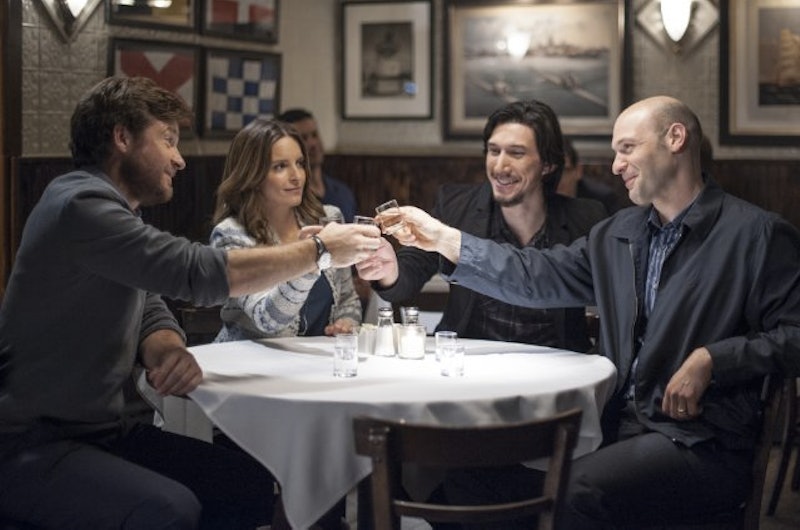 So... what's the going opinion on This Is Where I Leave You? It's got a capital K-Killer cast (a cast that's doing the press tour right, by the way), and it's based off of a well-respected book — yet, it's been getting reviews that place it on the lower edge of the mediocre spectrum. I'd certainly give it more than its 45 percent on Rotten Tomatoes, but I do see why it got such a middling score: the whole film seemed vaguely like something we've seen before.

Many are already drawing comparisons to last year's August: Osage County: dead dad, skeletons in the closet, substance abuse, and terse moments around the dining table abound, oh and there's even the slightest hint of incest. There's also something of The Family Stone and Dan In Real Life to it, with a healthy dash of Arrested Development thrown in (if only because Jason Bateman plays such a great run-down Joe Schmo).

But that's not to say it wasn't fun: even if it wasn't the most original piece of cinema out there, there's nothing wrong with a good old fashioned family dramedy — plus, there were some truly hilarious moments in there. So, if you're on the fence about shelling out the 12 bucks to see the movie, here are some little spoiler-free (for the most part) scenes that'll help you make your decision:

There's a reason why critics are already praising her for her performance.

It's one of the best running gags in the film, honest — that, and the fact that no one can seem to help referring to Schwartz's character by his unfortunate childhood nickname, Boner.

5. Bateman, Stoll, and Driver Breakfast Club it up

The setting: the Hebrew school at their temple. The scenario: a couple of blunts discovered in the pockets of an old suit.

He does "shock jock" very well, and is generally an asshole. Definitely a scene stealer.

... But it leads to an adorable scene with Rose Byrne, so it's all good?

It's hugely cathartic, and afterwards she proudly proclaims that it was her platinum wedding band that saved her from a broken hand (white gold would have buckled under the pressure, apparently).

9. And she cops a feel from Jane Fonda

You gotta see it to believe it.