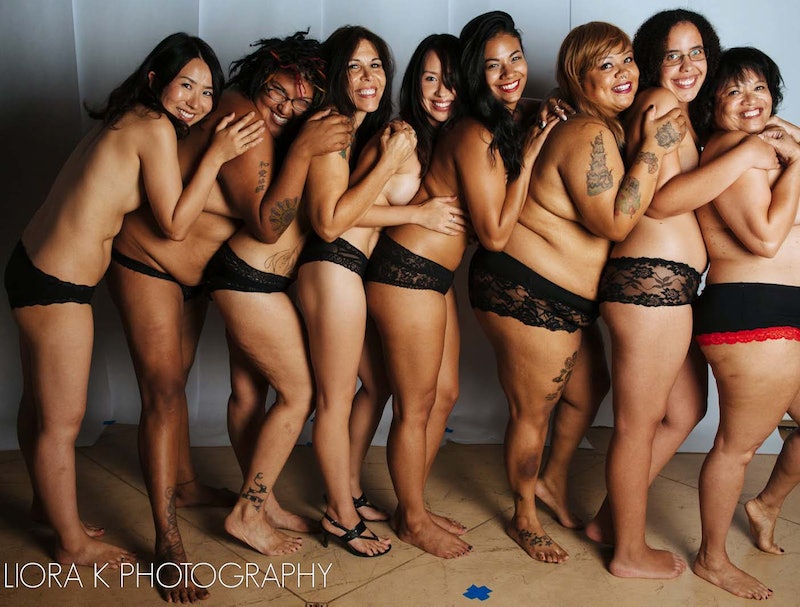 I was recently at dinner with a group of friends and acquaintances when the conversation turned to a woman one of our male friends had stopped dating. (Neither he nor the recently jilted she was at dinner.) Almost everyone at the table, including a couple of women and the male friend's gay brother, acknowledged that when the woman had appeared at a recent party in an outfit that revealed her not-so-toned thighs, they knew the friend would never see her again. No one was upset about this. She wasn't up to his standards, they agreed. It made sense.

If you attend many women's conferences, went to an all-female school or college, had remotely feminist parents, read much online about women in the workplace, or just spend a lot of time on Pinterest, you're probably aware that the No. 1 instruction given to women looking to be successful in life is to believe in yourself. If you like yourself and what you're about and what you look like, it doesn't matter what anyone else thinks. It's the message that was embedded in a moment in the first season of Girls, when Lena Dunham's character, Hannah Horvath, gets asked whether she's ever tried to lose weight. Hannah briefly transcends her usual patterns of self-loathing and self-sabotage to answer that she hasn't, "because I decided I was going to have some other concerns in my life."

But this triumphant idea collides very confusingly with the reality of unanimous thigh appraisals. The message that emerges from that collision is yes, be successful, be independent, be fierce, bitches get stuff done, you go girl! But also find a way to be hot, because without that, none of the rest matters.

At this year's WIE (Women, Inspiration, and Enterprise) Symposium in New York City on September 19, Bustle will lead a panel with Girls star Zosia Mamet, psychologist Jennifer Hartstein, Ph.D., Jen Bremner, Brand Building Director for Skin Cleansing at Unilever, and author and wellness expert Gabrielle Bernstein on how women can pass on confidence — to each other and to younger women and girls. As part of that conversation, we'll talk about body confidence, because it is actually impossible to have a conversation about women and confidence without talking about the ways in which women's value is still tied to their looks, and the ways we can choose — or not choose — to participate in that.

All of which is easy to do and easy to rationalize (please see the Thigh Judgment one more time) but also incredibly distracting and necessary to resist with every ounce of yourself. Because if you don't resist the self-loathing, you're helping make it a permanent part of the female condition. Sometimes I think about all of the times women, including myself, have spent hating and sometimes abusing their bodies. I think about everything we, or I, at least, could have been doing instead, thereby demonstrating that actually, being female doesn't require you to dislike or abuse yourself. I think about how it never felt like it, but I always had a choice. And then I think, "What happened to the revolution? We put it on a diet."

But many, many, many women have also, over the last five years, especially, started to raise hell about this, and the Internet, as we all know, is a forum (mostly) favorable to hell-raisers.

Here are some of the most viral body acceptance projects of the last several years, created by women who realized that we're never going to be able to entirely tune out the your-body-is-disgusting-and-unloveable noise until everyone knows what most bodies — bodies that work and go to the beach and fuck and complete exhausting physical feats like birthing a child or participating in team sports — look like.

Shape magazine interviewed blogger Brooke Birmingham to feature her story in a series of weight loss success stories. The magazine requested a personal photo to accompany the piece, but when Birmingham submitted the photo above, she was asked to send a photo of herself with a shirt on, despite the fact that Shape routinely ran photos of women in bikinis in this series.

Birmingham wrote about the situation on her blog Brooke: Not On A Diet, including screen shots of her email exchange with the Shape freelancer writing the piece. "My body is real, not Photoshopped or hidden, because I feel like I should be ashamed. This is a body after losing 172 pounds, a body that has done amazing things, and looks AMAZING in a freaking bikini," Birmingham wrote.

The blog post went viral, and Shape changed its tune, planning to feature Birmingham — and her body — in a new feature on how major weight loss actually looks on a woman's body.

The expressions on the judges' faces before Haslam started her routine said everything about how we've been taught to think about women of size and what their bodies should and shouldn't be seen doing. Haslam undermined all of that with her attitude and skills.

"When was the last time you opened up your browser and saw a beautiful image of a body shape that looked just like yours?" asked activist blogger Jes Baker in a blog post introducing the Expose Project, a collaboration with photographer Liora K that invited women in Tuscon, Arizona to disrobe and reveal what actual female bodies look like. The resulting photos are, obviously, beautiful and joyful and convey the opposite of the isolation we all feel when criticizing our own individual bodies. These pictures show diversity, but also the community that is more possible when women refuse to be ashamed of themselves.

As she explained in the video introducing her project, photographer Ashlee Wells Jackson had a hard time accepting the extreme changes her body underwent through a difficult pregnancy and childbirth. When she shared her experience with other new mothers, she recognized that she wasn't alone. Thus began a photo project that spanned multiple cities and, once again, focused on raising awareness of what un-airbrushed women who don't have around-the-clock childcare, a personal chef, and a trainer look like in early motherhood. They are not at all perfect and very beautiful.

The Love Your Lines Project

Instagram is known as a forum for representing your life and your body in idealized form, which made the Love Your Lines project launched by two mothers on the East Coast even more powerful. They started the Love Your Lines Instagram account to raise awareness of the fact that most people have stretch marks of some kind, especially people who have given birth to other humans, and showcase the beauty of those bodies. They started receiving submissions immediately. “I’m a mother of 3… I have learned to love my body, love lines included," the woman pictured above captioned her photo.

Between the hazing rituals, the social pressure, and the prevalence of sexual assault, college is not exactly known for inspiring healthy body image. This year, the Harvard women's rugby team sought to counteract those negative influences with a photo shoot where team members wrote positive messages on each other's bodies. The photos, posted on a team Tumblr called Rugged Grace, emphasize strength and what these women's bodies feel and do rather than how they look or should look.

In 2012, for the second year in a row, plus-size style blogger Gabi Gregg posted photos of herself looking gorgeous, and more importantly, confident and happy in a series of bikinis. In the post and a subsequent slideshow on xoJane, she coined and happily owned the term "fatkini." The photos, the term (which obviously became a hashtag), and Gregg's own swimwear line launched, or helped launch, an entire movement of plus-size women showing off how great they feel in clothes not limited to but including two pieces. The idea that women larger than a size 12 are proud of their bodies and want to spend money on beautiful, stylish clothes has since changed the fashion industry. The Sept. 22, 2014 issue of The New Yorker chronicles the rise of plus-size fashion as a significant source of revenue for brands, no to mention a long overdue recognition that plus-size women are not invisible.

At fall 2014 New York Fashion Week last February, workwear designer Carrie Hammer also challenged the fashion world status quo by including the first ever model in a wheelchair, Dr. Danielle Sheypuk. The psychologist, who has been in a wheelchair since age two, rocked a black blouse and newsprint skirt, and the photos went viral.

This September, Hammer's show featured bacterial meningitis surviver Karen Crespo, a quadrupal amputee who received her prosthetic limbs just a few days before the show and walked the runway with a body that disease changed more vastly in a few years than weight loss or childbirth ever could. That is confidence.

More like this
Your Moon Sign, Explained
By Nina Kahn
Here's How To Practice Self-Love In Small Ways Every Day
By Mackenzie Sylvester
Here’s What Sarah Jessica Parker’s Canned Cosmo *Actually* Tastes Like
By Emma Garza
What Is “Night Luxe?” Breaking Down TikTok’s New Aesthetic
By Courtney Young
Get Even More From Bustle — Sign Up For The Newsletter