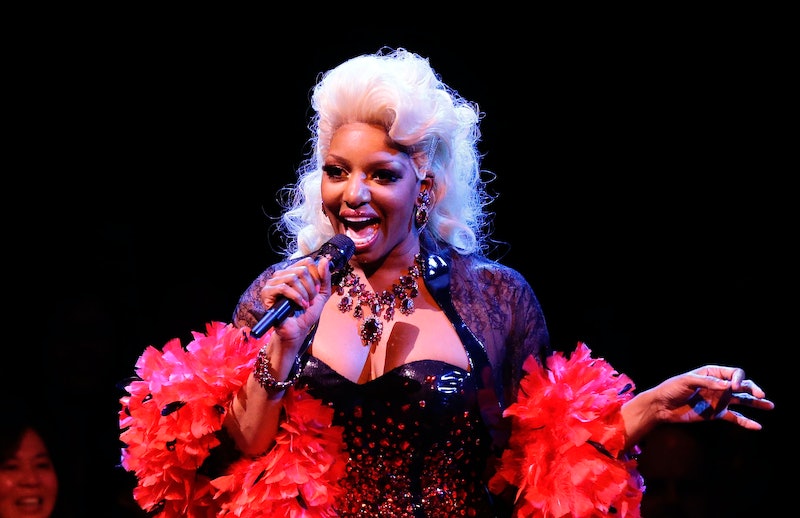 Fittingly enough, it appears that Season 6 of Glee will turn out to be one huge Mt. McKinley High class reunion. First it was confirmed that Heather Morris would return and now The Wrap reports that NeNe Leakes will also return to the show for at least one episode of its final season. Whether you have love, hate or aggravating indifference towards Leakes, her onscreen antics have proven time and time again that she's perfectly capable of bringing it for Bravo. But given her success outside the realms of reality TV, I wonder if she has plans to—dare I say it— permanently resign from her post as a leading diva on The Real Housewives of Atlanta and move on to more creative pastures.

Honestly, I've never included myself amongst the members of #TeamNeNe, but I'm also not a hater nor am I subtly suggesting that Bravo should listen to Wendy Williams by giving Leakes the axe. If they can continue giving air time to the Giudices then far be it from me to campaign for Leakes' termination. However, I do believe that she's gained some substantial credentials that could sustain her career without her continuing to engage in the nerve-racking, over-the-top behavior we've all come to expect from her on RHOA.

Besides, Leakes has shown us that there are far more effective ways for her to yield her evilness, I mean, her desire to to remain in the spotlight. For some reason, her role as the wicked stepmother in Broadway's Cinderella immediately comes to mind. Aside from that and her role on Glee, her acting skills were obviously good enough to land her a starring role on the short-lived The New Normal. Leakes also has a clothing line that sold out on HSN.

There's no arguing that Leakes' massive RHOA fan base is the reason behind her success, but with the show prepping for its seventh season, those fans who know and support Leakes are acquainted enough with her to follow her wherever she goes, even if they won't get a chance to see her discuss it in the presence of Bravo's cameras.

More like this
How Reality TV Stars Conquered Your Bookshelves
By Anna Peele
What’s New On Netflix: 'Stranger Things' & 'Somebody Feed Phil' Return
By Arya Roshanian
What’s New On Netflix: A Victoria Justice Rom-Com & The Return Of David Letterman
By Arya Roshanian
Everything We Know About Chèrie & Jessey’s Abrupt Exit From Bling Empire
By Alyssa Lapid
Get Even More From Bustle — Sign Up For The Newsletter