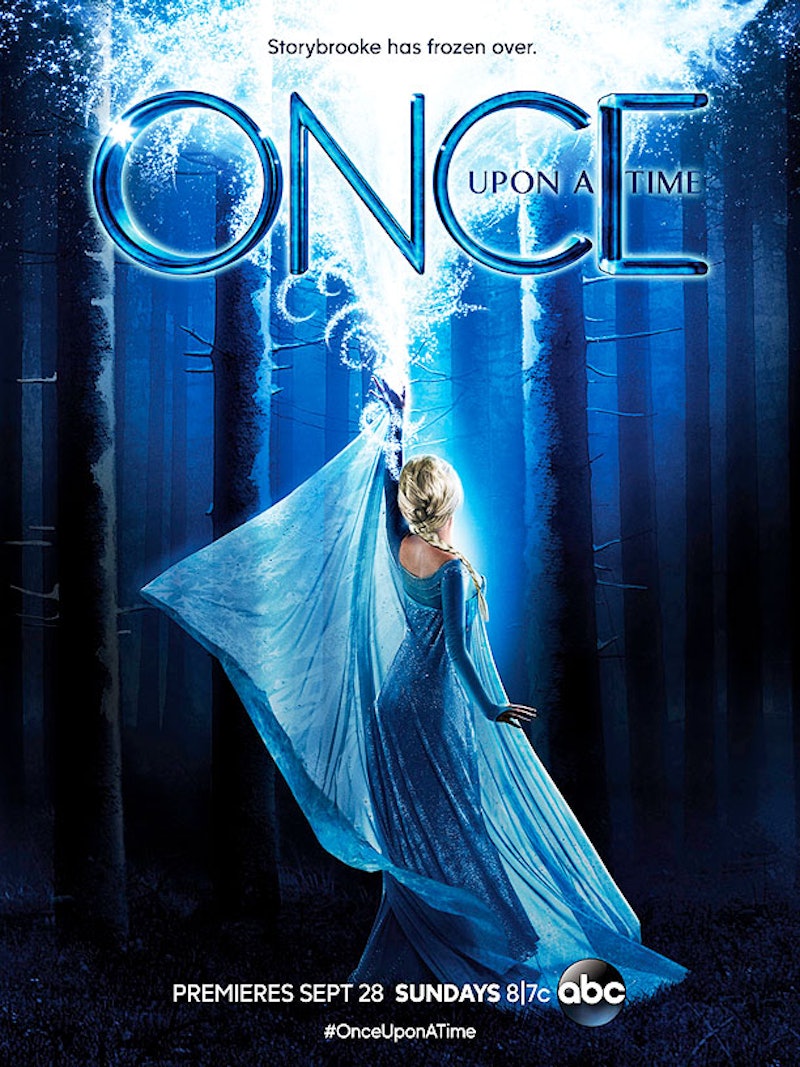 It's been months since Elsa first materialized out of Rumpel's vase during the Once Upon a Time Season 3 finale, yet the hype surrounding this Frozen adaption remains as solid as ice. (Pun intended.) And though details regarding the actual plot have begun to unthaw (OK, I'll stop), there's one particular aspect that remains unclear — will OUAT Season 4 incorporate Frozen songs into the plot or will the show simply opt to just… let it go? Now, obviously the writers are bound to make one or two (or 10) not-so-subtle nods to the film in one way or another — these are, after all, the same people who gave Rumpel the name of Mr. Gold and coined Jiminy Cricket as Archie Hopper. (We get it, guys. We get it.) So yeah, odds are we'll hear at least one "let it go" reference before the Season 4 premiere comes to a close. But as for if the folks of Storybrooke will suddenly burst into actual song? I wouldn't put my money on it.

OUAT showrunners Edward Kitsis and Adam Horowitz opened up to Entertainment Weekly on the subject and confessed that they have no intention of adding any musical numbers into the Frozen arc. "We’ve never done a musical episode," Horowitz disclosed. "And I don’t think the way we want to tell this story is to suddenly turn Once Upon a Time into a musical." So there you have it, folks — more than likely it's just not going to happen.

However, like with any kind of creative process, things are always subject to change if the right opportunity presents itself. And believe it or not, there are a few ways OUAT could integrate one or two songs into the plot without making it come across as totally ridiculous. (FYI, I have yet to recover from that trippy Grey's Anatomy musical episode.) So if for any reason the writers end up having a change of heart, here are a few select occasions that would make a musical number on the show completely appropriate.

OUAT will play host to a Frozen wedding between Anna and Kristoff. This would be the perfect opportunity to allow someone the chance to sing. (After all, it happens during real-life weddings all the time.) Heck, the bride and groom could even bust out a rendition of "Love is an Open Door" and it would totally fit in that particular moment. Plus, when you're the bride you can pretty much get away with anything, and that includes turning your wedding into a karaoke jam session.

While Singing Baby Neal A Lullaby

Now that there's a baby in Storybrooke, it would make sense if we heard Snow or Charming quietly singing a song to help get the little prince to fall asleep. He may be too small to build a snowman (or even know what a snowman is, for that matter), but odds are he'd find it to be a perfect background tune while trying to catch some Z's.

As Part of a Show Within a Show

Nothing makes a musical number more acceptable than by having the characters perform them in an actual theatrical setting, so maybe Storybrooke should put on some kind of play. That way, it's not real to them either. They could even joke how silly it is to try and make the audience believe random singing could actually happen. Perhaps Henry joins a school musical or Elsa's frost inspires the town to put on a Christmas show. Either way, it'd be the best time for someone to belt out the lyrics to "Let It Go" without having it seem painstakingly out of place.

Your move, writers. So what's it gonna be?