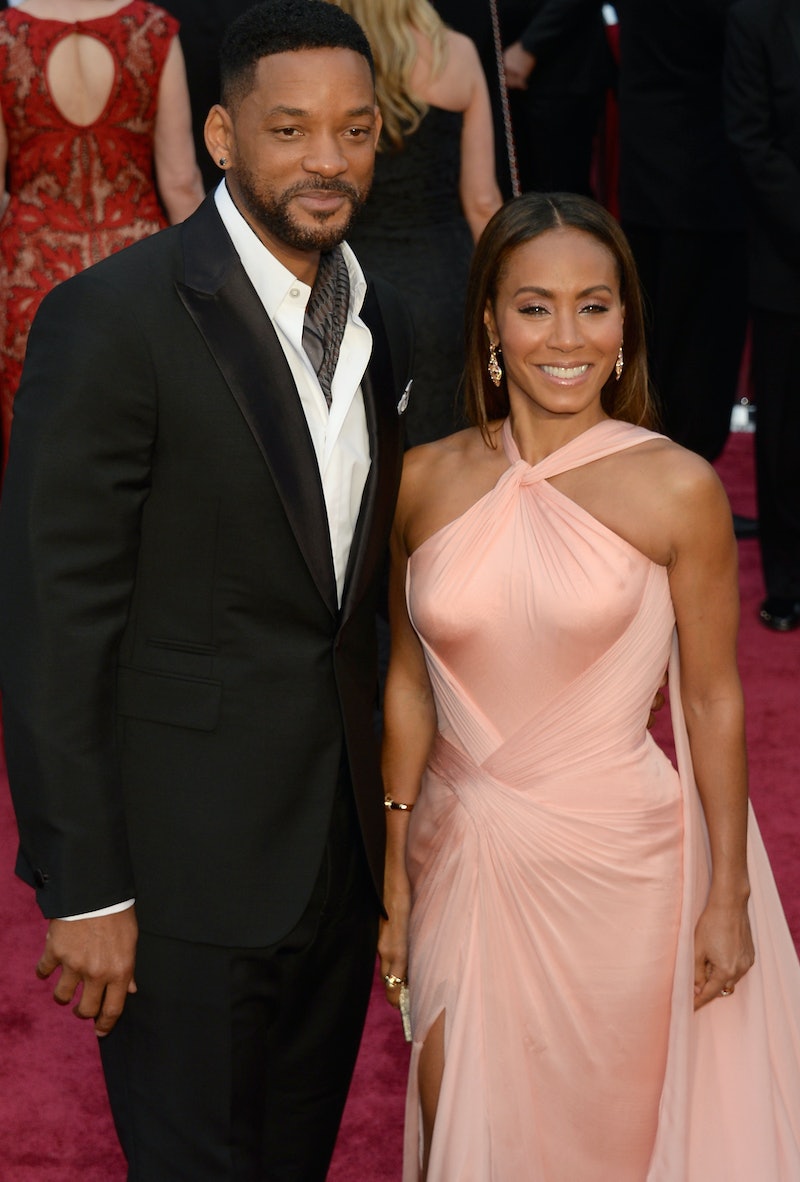 All power couples in Hollywood have to deal with their fair share of rumors around the state of their marriage, and Gotham star Jada Pinkett Smith and husband Will Smith are no different. When it comes to gossip, they've heard it all, but the one that claims they're getting divorced just won't seem to go away. However as Pinkett Smith has been in the media a lot recently (thanks to Gotham), it seems their marriage is doing just fine. Pinkett Smith was featured as the cover story for The Edit, Net-a-Porter's magazine, the week of July 31 and besides looking fabulous, she opened up about her relationship with her leading man.

The thing I love is being in a place where it’s just like, Will, to me, encompasses everything. It’s almost as if calling him 'my husband' is too small of a word for what he means in my life — and especially how I feel we, as women, identify the idea of a husband. I really had to mature and expand that. I think I had a very stuck idea of what a husband looks like, what a wife should be. Once I broke all of that, a whole new world opened for me...

And on Pinkett Smith's birthday on Sept. 18, Smith posted an amazing photo in celebration of his wife's birthday and wrote, "Happy Birthday, My Love. We've been together at your last 20 birthday parties. Let's go for 50 or 60 more."

With active showings of love like that, the Smiths are making it clear that divorce is not in their future, so it's time to stop spreading the lies.

Yet when it comes to the rumors about their relationship, Pinkett Smith appears to not be too bothered by them. She said in The Edit, "[you] look at how creative people can be, and it’s kind of entertaining. We can laugh because it’s so ridiculous. But I get it. I don’t take it personally."

Although she may be cool with people talking about her and her husband, it's different when it comes to their daughter, Willow. She let it be known that she was not OK with how the media spun the photo of Willow and Moises Arias, and Pinkett Smith stood by her daughter.

As for her career, Pinkett Smith portrays villain Fish Mooney on Gotham, which will premiere on Monday, Sept. 22 on Fox and she's rumored to be in talks for a role in the Magic Mike sequel. Although it looked like Pinkett Smith attended the Gotham series premiere at the New York Public Library solo (Will was nowhere to be found in the photos), it doesn't mean the couple doesn't do their own kinds of dates.

In Health magazine's October issue, she talked about date nights with Smith. "A lot of times, we'll do it at the house because when we go out it can be a little hectic. So we have different places around our yard where we like to set up a little Arabian tent, pillows, wine and cheese, candlelight. Will likes really thought-out productions."

It must be hard to maintain the romance after being together for 20 years and being super famous celebrities, but that date sounds pretty awesome. Considering my date nights consist of wine from a box while binge watching Netflix, I'm impressed. (Note to boyfriend: we need an Arabian tent.) And the romance doesn't stop there for the Smiths. "We're planning a big 20-year anniversary thing because it's hard to love someone — it take so much courage and so much strength," Pinkett Smith said in the video from her The Edit interview.

If their relationship is doing as well as they say, then there's a good chance they will be together for 50 more years of birthdays and anniversaries.