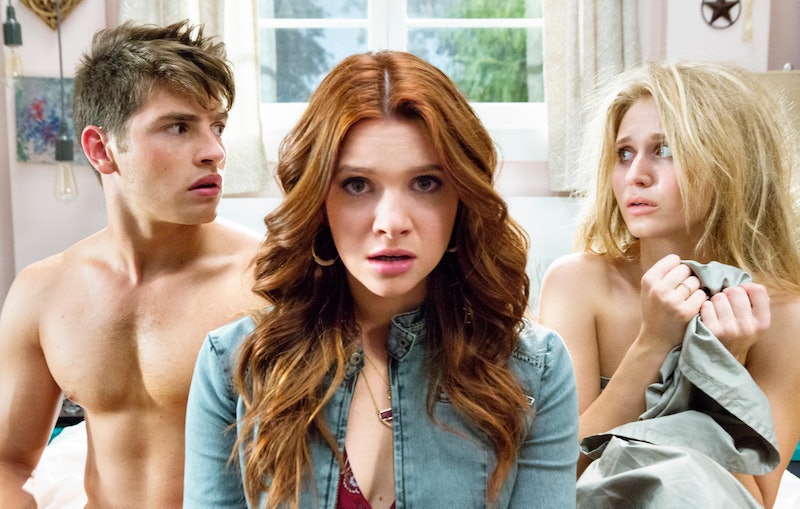 I'll admit it: When I first heard about MTV's Faking It , I groaned inwardly. Wait, they're actually making a show about girls pretending to be lesbians to gain popularity at a time when the LGBT community is fighting to be heard? What could possibly be worse? But since I'm a sucker for all teen TV shows — probably because my life as a teenager was nowhere near as cool — and love the unique touch MTV brings to their scripted shows, I eventually sat down to watch the first episode. And then the second. And then suddenly, several hours of my life had passed and I had a new favorite show I was obsessed with.

But if you haven't given Faking It a chance because you're worried about the way it's treating what can be a delicate topic, fear not. MTV is doing something really cool by creating a world where the road to popularity means pretending to be gay. Reading those words — typing those words — makes me want to cringe, but when you see the show in action, it quickly wins you over. And you should allow yourself to be won over, because if you're not watching Faking It already, Season 2 (which premieres Tuesday) is a great place to start.

The words "MTV" and "smart comedy" don't always go hand in hand, but this time, they do. The writing is pretty brilliant, and the humor is so subtle. They're not grasping at straws to keep their audience. Because Faking It's writing team is so tuned in to what will really work, the results are a quiet kind of funny that makes me laugh because it's just so honest.

The characters are incredibly human, and it's a beautiful thing

Nobody on the show is 100 percent likable. In the same way that Girls occasionally makes me squirm because it hits a little too close to home, Faking It manages to remind me of all the times I've felt the same way that the characters do. There's a face palm moment in just about every episode, and it's usually because I'm seeing a character do something that I would totally do (or want to do) as a teenager but now, in all my grown up wisdom (yeah, right) have come to know better. Every character is guilty of doing something they regret, and it keeps them real.

But because they make mistakes, the cast of characters here are so relatable. In almost every single character, it's easy to find something that you identify with, and this ends up creating this wonderful shade of gray that makes it impossible to dislike them.

The story lines are about to get really interesting

If you've been paying any attention, you already know that Amy and Karma's friendship is in serious jeopardy... and recent spoilers about Amy's arch nemesis (and new stepsister) Lauren reveal that Season 2 is about to give us a lot of scenarios that I don't know that television has ever explored before. And it's going to be amazing.

Oh, and did I mention that Orange is The New Black 's Laverne Cox is about to guest star in an episode? That's reason enough to watch in itself.

It's doing something awesome

Some people are still unsatisfied with the way that the show is handling Amy and Karma's "fake" lesbian relationship, but I think it's doing something really important: presenting a realistic struggle. Amy's trying to figure out her sexuality while fighting a crush on her straight best friend, and she's doing it in the messiest of ways.

It breaks up the teen TV show monotony

There are no vampires here, no supposed dead girls trying to ruin their BFFs lives from the grave (I see you, A). Faking It gives us something teen TV shows haven't in awhile — just a small collection of regular kids, trying to figure out who they are in a world that just seems to want to shut them down.