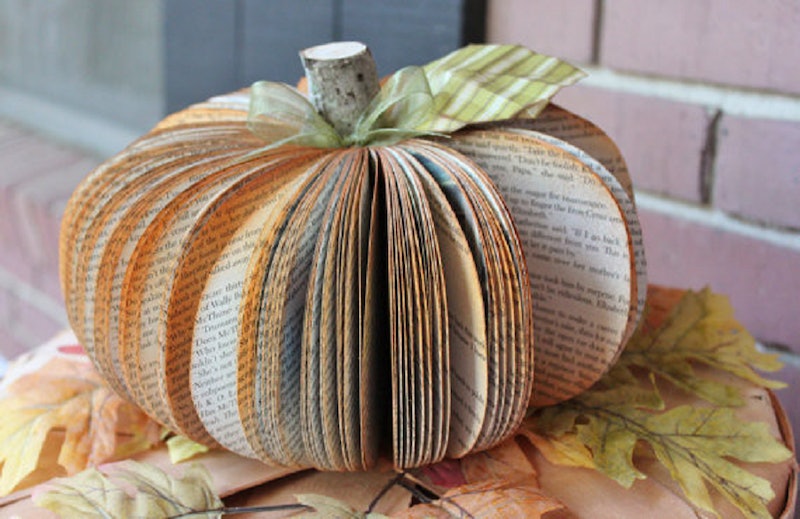 If you thought all the excitement in YA publishing in September was settling down, you could not be more mistaken. There's only more to get excited about coming in October. Some of your favorite young adult and middle grade authors — (cough) Ann M. Martin, Sara Shepard, Rainbow Rowell, Rick Riordan, Maggie Stiefvater, and I could go on — are giving you new work this month. And there are plenty of new authors with some seriously stunning debut novels you need to get on your radar immediately.

October young adult lit has a little taste of something for everyone. If you want to stay up late with your flashlight, just wait for a few things coming your way on October 7. If you just can not wait any longer for that next book in your favorite series, more than one author has just what you need. And if you're already in mourning with the end of your favorite series, some well-known authors are back to start the next series that will have you flipping the pages until the wee hours in the morning.

There's so much coming, that I've decided to help you out. Here are 18 books you must know about, and I'm making it easy on you by ordering it according to publishing date. Grab your calendar, and let's do this.

When Ann M. Martin comes out with a new book, the children's and teen market will always listen. She's certainly earned her keep with, of course, with The Baby-sitters Club, but don't forget she also has a Newbery Honor book to her name with A Corner of the Universe. And now that she has our attention, I must say that Rain Reign is absolutely stunning.

Fifth-grade student Rose is hooked on homonyms (her name is even one) and following the rules, mostly because of her Asperger's diagnosis, which doesn't make her very well-understood in school or at home. But she's particularly close with her dog Rain (homonyms: Reign, Rein), a stray her father brought home for her. But when he goes missing one stormy night, Rose takes off after him. The story is heartbreaking in part, but Rose is so honest, so compelling you can't help but run away with her.

Legend author Marie Lu's new series begins with The Young Elite , a historical fantasy story following the events after a blood fever has wiped out many of the adults in the area. The children who were infected and survived were marked, their hair changed colors and their skin patterned with scars. But rumor has it, these children are also bestowed with magical powers. Lu's novel is so immersive, you won't be able to put it down, and Lu has build a three-dimensional world that you'll want to keep revisiting. You're in luck, though, because there will be more to this story.

The Blood of Olympus by Rick Riordan (Disney-Hyperion; October 7)

Remain calm, Percy Jackson fans; the end is finally here. Rick Riordan's fifth and final novel of the beloved Heroes of Olympus series is coming this month, much to the joy (and also sadness that it's over) of fans everywhere. Buckle up, it's going to be a twisted, action-packed, wild ride.

If you love Pretty Little Liars (#TeamAria4Ever), you're going to want to run to the bookstore to get ahold of Sara Shepard's next juicy series, beginning with The Perfectionists . You will not be disappointed. There are girl friends, secrets, suspense, and, yes, murder. The story starts with the most popular boy in school killed at his own party, and the truth starts to unravel chapter by chapter. What more could a PLL fan ask for?

Notorious A Million Little Pieces "memorist" James Frey has an interesting proposition for YA-lovers this fall: an interactive novel, backed by Full Fathom Live and Google's Niantic Labs, where readers can solve an in-book puzzle of clues and riddles to find a hidden key somewhere on Earth. It essentially allows you to live in a reality version of what the characters in the books must do. But wait, there's more: the first reader to find that key will win $500,000 worth of gold. You officially have my attention, James Frey. And to anyone reading this, the challenge is on.

If you loved Edgar Allen Poe week in high school (who didn't?) then you'll love Bethany Griffin's latest Poe retelling The Fall, based on — you guessed it — The Fall of the House of Usher. And Poe would be proud. It's so tension-filled that you'll find you're digging your fingernails into the pages as you read. So basically what I'm telling you is don't start reading this in the evening, because you won't be able to put it down and then you'll terrify yourself into the night.

Becca Fitzpatrick has already made a huge name for herself in YA with her Hush, Hush series, but she's back with Black Ice , and she's traded in fantasy/paranormal for a stone-cold thriller (get it?). When a blizzard trips Britt and her ex-boyfriend in a remote Wyoming cabin with two strangers — well, no spoilers, but they're not exactly the kindest of strangers. But don't worry, there's still some of that sexy romance we all love Fitzpatrick for.

My True Love Gave To Me by Various YA Authors (St. Martin's Press; October 14)

Who's ready for Christmas?! OK, well, maybe you will be when you hear this news: All of your favorite YA novelists are coming together to give you short stories about the holiday season in one book, My True Love Gave to Me . Does that make it better? Great.

I'm serious, these authors are no slouches; we have Rainbow Rowell, Holly Black, Stephanie Perkins, Gayle Forman, Jenny Han, David Levithan, and — oh my gosh, that's only half of them. Pick this one up for all the Christmas stockings.

Sara Raasch's debut YA fantasy novel isn't afraid to grapple with some intense subject matter. The world of Primoria is divided among seasons, and our protagonist Meira's home, Winter, has been conquered by Spring, and its inhabitants live as slaves. Orphaned Meira decides to go after the one thing that can bring Winter back to power, and there's a twist you'll never see coming.

The final installment of Neal Shusterman's dark Unwind Dystology continues the story of teenagers who were scheduled to be "unwound" — essentially erased — and who know control the fate of America. Shusterman has never been afraid to tackle complex sociological questions, such as this idea of retroactive abortion, and this final novel does not hold back. It's chilling and heart-wrenching and will have you questioning so many things about the world we live in.

The Cure for Dreaming by Cat Winters (Amulet Books; October 14)

If you can turn past the stunning cover, Cat Winters' The Cure for Dreaming is a totally atmospheric, feminist story set during the turn of the 20th century. When Olivia's pro-women suffragette stance gets to be too much for her traditional father, he hires a hypnotist to entrance the rebelliousness out of her. This does not go as planned, and Olivia ends up being able to see people's true natures — but there's a catch. She can't speak the truth aloud. As a bonus, the book includes some super-interesting period photos.

Speaking of atmospheric, you'll be able to smell hot, sticky Louisiana air in Natalie C. Parker's debut Southern gothic tale Beware the Wild . There's a bit of paranormal in that air in the story of Sterling, who goes to the dangerous swamps to find her missing brother Phin, when she's the only one who seems to notice that that sister in their house, she's never been there before.

This novel needs no introduction. Everyone and their mothers are waiting for the third installment of the Raven Cycle. And everything you love about it is back: the romance, the tension, the suspense, the amazing characters, and the witty dialogue. The whole series has been truly unique, and this is no exception. You'll be banging down Maggie Stiefvater's Twitter account to make sure that final installment in on track, because of course, there's a cliffhanger that will leave your mouth dropped.

How It Went Down by Kekla Magoon (Henry Holt and Co.; October 21)

It today's charged climate, it would be impossible not to mention How It Went Down , about the death of a black teenager at the hands of a white teenager with a gun. It feels so important and it resonates so fully with everything in the news today, that it seems almost like some work of magic that the book exists right now, this month. But even away from the headlines, Kekla Magoon's story is truly affecting and so intelligent that I'm glad we will have a book like this on the shelves.

Ally Condie is coming off her hugely successful Matched trilogy with Atlantia , about an undersea Atlantis-like city, constructed after pollution riddles the land "Above." Now, like the Little Mermaid before them, they have to choose whether they want to live up where they lay all day in the sun, out of the sea or in their underwater home. But that choice comes with a caveat: It's permanent. At its heart, it's a simple premise and it totally works, as readers become invested in the choices of all the characters, and why they choose them.

Did somebody say dragons?

In Julie Kagawa's unique spin on the fantasy trope, dragons walk among us in human form for safety after their near genocide long ago. But brother and sister, Ember and Dante, aim to change that, and are training to defeat the dragon slayers and find their way back to power. The modern fantasy feels new, and the story will keep you turning the pages.

Compulsion is the first in a new Southern gothic series, the Heirs of Watson Island. And in true Southen gothic form, it has a whole lot of feuding families, old plantation land, a hint of paranormal and curses, and plenty of secrets to go around. As these family secrets start to become unearthed as you turn the pages, you'll find the suspense heightening and heightening until you start to realize you have been holding your breath through the last chapter.