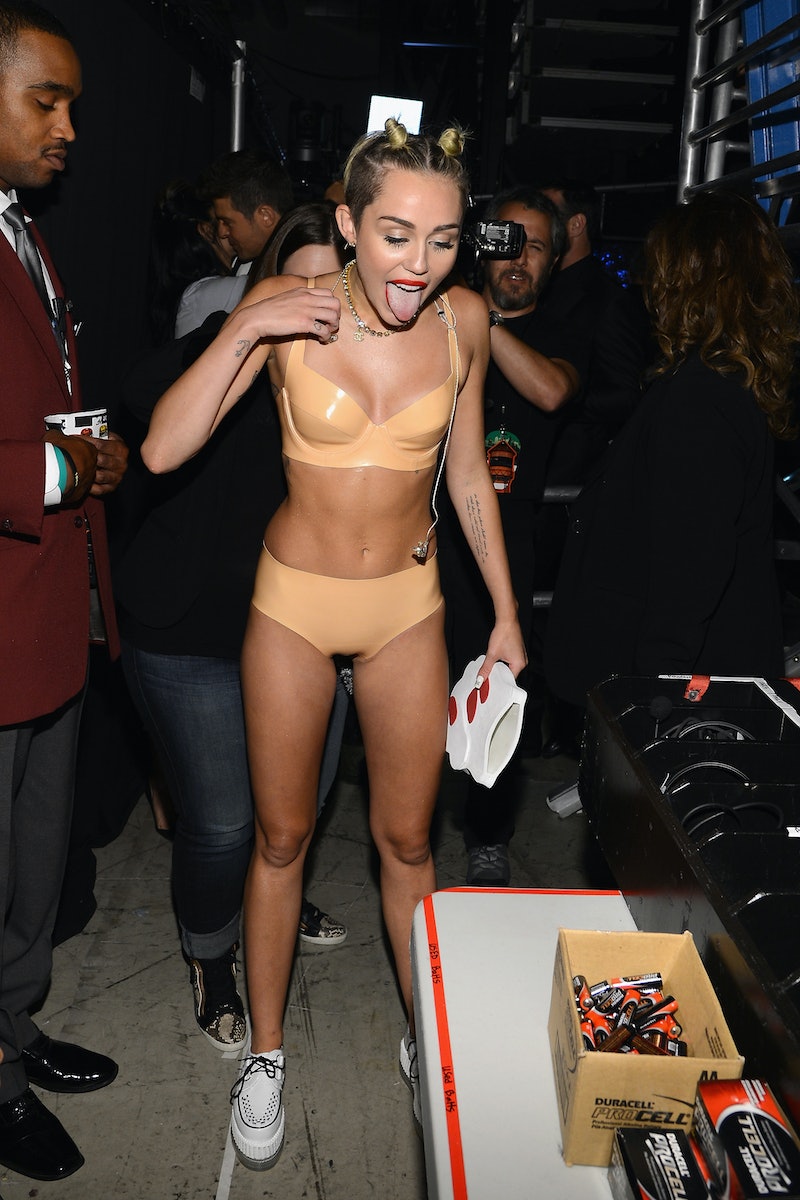 You know those crazy fans around the stage at Sunday night's 2013 VMAs? Yep, that was me. For all three glorious hours of the ceremony.

Let me start start from the beginning.

I won a pit ticket a few weeks ago through this fan company called 1Iota and was obviously not going to pass up the chance to see Miley Cyrus twerk in person, even if that meant waiting six hours. So here's the real story of what happens behind all that glitter and gold you see on screen.

It's an exhausting night, but one filled with a lot of omgamireallyhere?! moments. Some performers are better in person (Kanye!) while some are worse (Robin Thicke), and celebrities really are just as good looking as you'd think. (Sorry, haters!) But who was booed? Who appeared to leave the Video Music Awards early? For those of you who simply couldn't get enough watching from home, find out below what it was like watching from the pit. Ready? Here we go.

We had a 5 p.m. call time at a theater around the corner from Brooklyn's Barclays Center. I showed up at 3 p.m., but that was nothing compared to the crowd at the front of the line who came at 8 a.m. It was hot and the line was long, but whatever. I WAS GOING TO THE VMAS.

About an hour or so later, the crew at this year's Video Music Awards started processing us, and before long, we were in. Still, as soon as we were let into a huge auditorium, we were told it would be another two hours before we were going anywhere. But! There was free water and bathrooms and even chairs for us to sit in. So we waited.

Two hours and two bathroom trips later, about 70 of us were taken outside and essentially played grown-up follow-the-leader to the Barclays Center, which was about six blocks away. We passed hundreds of fans lined up on the street hoping to get a glimpse of the red carpet, but haha we got to go right in. After a quick security line, we were released into the enormous pit and everyone rushed to find the best spot. Then, guess what? MORE WAITING. For two more hours. While standing. Let's just say I got real close with the people I was standing next to.

For the first hour, production staff prepped us by telling us what we could expect. And what could we expect? Well, basically, the night would be "the best time of your life." The VMAs' house DJ, DJ Cassidy, started playing an hour before showtime, but the celebrities didn't really start arriving until about 8:45 p.m., and many showed up during the opening number. How rude.

But before I knew it, it was SHOWTIME!

Lady Gaga performed, though you at home probably saw more than we did in the pit. Instead, it only looked to us that she changed her wig, like, 100 times. (As for the boos you all supposedly heard from home? Not audible to my ears.) But after a few minutes, It was time for the first presenter. I started hearing screaming. WHO WAS IT?

Of course, it was ONE DIRECTION. Like, 10 feet away.

This was like all the girls around me. Not even kidding.

OMG ONE DIRECTION YOU ARE PERFECT NEVER CHANGE.

Yes, they are as beautiful in person as they are in real life. ONE DIRECTION, I APPRECIATE YOU. And, just FYI, I am a grown woman. (P.S. Sorry Harry Styles fans — Zayn is so obviously the cute one.)

Cyrus was up next (and I know we've talked enough about this). But, strangely, in person, her performance of "We Can't Stop" was not that shocking. Maybe that's because it all happened so fast, but no one in the crowd seemed to think anything she did was worth all the chatter it inspired. Say what you want about her antics, but she still owns the stage live. (Unlike Robin Thicke, who appeared as though he was lip-syncing, and basically stood still while Cyrus rubbed against him. Justin Timberlake, this man is not.) It's pretty clear Cyrus does not give a flying F what anyone thinks, but, based on the smile that remained plastered on her face, it seemed like nothing made her happier than being the center of attention in both the auditorium and on TV.

It wasn't long until Timberlake came out and rocked it, and then 'NSYNC reunited and it was 1999 all over again. I think maybe I cried? I don't know, I was so overwhelmed. I know the performance seemed short on TV, but in the theater, it was everything. Too little singing in my book, but, oh, the dancing!

In the pit, however, it seemed clear why the performance was so short. Some of 'NSYNC's members simply couldn't keep up with the Vanguard Award-winning Timberlake. JC Chasez and Lance Bass seemed to be on point with Timberlake, but both Joey Fatone and Chris Kirkpatrick were looked more than rough around the edges. Didn't matter, though, because all any '90s girl wanted was to hear "Bye Bye Bye" so she could relive her childhood.

During Kanye West's performance (which was totally amazing in person), everyone decided to rush the stage and a small fight broke out.

Then One Direction won song of the summer for "Best Song Ever" and we all knew that was bullshit. Not sure if you could hear it on the broadcast, but the whole auditorium started booing.

And then there was some Macklemore, Drake, and Bruno Mars, but let's be honest, it was all pretty much a snoozefest after 'NSYNC left the stage. The pit crowd started to thin out and most of the celebrities were gone by the time Swifty awarded Best Male Video.

But anyway, here are some more additional not-so-secret details about what goes on behind the scenes:

This morning, I woke up with what felt like a killer hangover. Except I didn't drink last night, so I'm pretty sure last night's VMA experience can be compared to that time you went out, got trashed, danced your ass off, and then woke up the next morning not totally sure if you actually had fun or the idea of it was fun. Either way — 'NSYNC, guys!

More like this
Everything To Know About Taylor Swift’s 10th Studio Album, 'Midnights'
By Grace Wehniainen and Jake Viswanath
Olivia Wilde & Harry Styles' Relationship Timeline Started With 'Don’t Worry Darling'
By Jake Viswanath
Self Esteem's “F*cking Wizardry” Is An Anthem About Knowing Your Worth
By El Hunt
Kate Bush Revealed The Real Meaning Behind 'Running Up That Hill' Lyrics
By Darshita Goyal
Get Even More From Bustle — Sign Up For The Newsletter