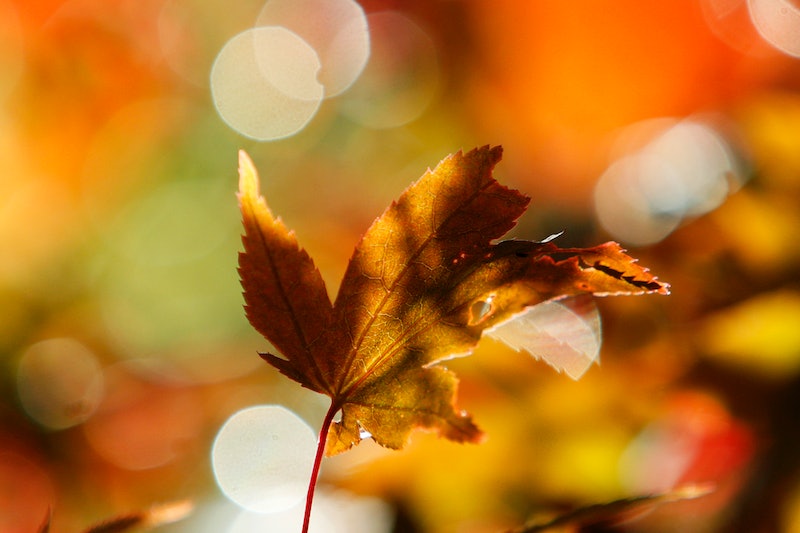 With Wednesday night’s sundown, the Jewish New Year, Rosh Hashanah, officially began. Happy Rosh Hashanah, you guys! While it’s officially the New Year for only our Jewish friends, many other people see the month of September as a new year of sorts, as well. There’s just something about the end of the summer; the shifting of the seasons and the onset of fall makes this time of year feel even more “new,” than New Year's Day. Jan. 1 is smack dab in the middle of the winter, so what’s so new-feeling about that? Not much.

September is such a “new” year for so many people, that it’s even become a month for making resolutions, and statistically, it’s the resolutions that are made at the beginning of fall that are more likely to stick than those made in January.

As Nick Carraway said in The Great Gatsby , “Life starts all over again when it gets crisp in the fall,” and he’s right. There is a beautiful renewal that comes with September, and honestly, January can’t hold a candle to it. Not convinced? Here are the 22 ways that September feels like the real new year.

THE hot SUMMER IS OVER

WHICH MEANS YOU CAN KISS THE HUMIDITY GOODBYE

Ah! Breathe in all that fresh, crisp air!

AND PACK AWAY YOUR SUMMER CLOTHES

There's nothing like taking a day to box up months worth of shorts and sundresses to feel ready to take on a new season.

AND SHED YOUR SUMMER SKIN

There’s no time like September to clean out your pores from a long, hot summer.

AND START NEW WITH YOUR FALL WARDROBE

Which is usually five shades darker than your summer wardrobe.

YOU GET TO WORK ON BUILDING YOUR BANK ACCOUNT BACK UP

Between the electricity bill for your AC and all the long weekends you took, it’s time to focus on saving money again.

WHICH MEANS STARTING A BUDGET

As much as it might pain you to do so.

BUT BEFORE YOU DO THAT, IT'S TIME FOR A NEW LOOK

OR DYEING IT A DARKER SHADE OF RED

To go with that dark wardrobe, naturally.

WHICH MEANS A NEW CHANCE TO ACTUALLY PULL UP YOUR GRADES

And impress your new professors.

… AND GET YOUR BACK-TO-SCHOOL FASHION ON

Sweaters, and booties, and tartan, oh my!

ALL YOUR FAVORITE TV SHOWS START UP AGAIN

and SO DOES MONDAY NIGHT FOOTBALL

For people who are into that sort of thing.

your DIET CHANGEs As YOU WELCOME AUTUMN FOODS

Long gone are the lobster rolls, while things like squash soup and Brussels sprouts replace them.

Or spiced pumpkin latte season, for you basic bitches out there.

IT’S BACK TO THE DAILY GRIND

OR MAYBE, IT'S TIME TO FIND A NEW DAILY GRIND

Yes, you're likely to feel suddenly restless in September

Don't be surprised if you find yourself reevaluating your relationship.

If this doesn’t mark a new year, then nothing does.

THE TREES OUT YOUR WINDOW ARE NEW AND ALIVE (SORT OF)

Although that color really means they're dying.

but IT'S all PROOF OF A NEW BEGINNING