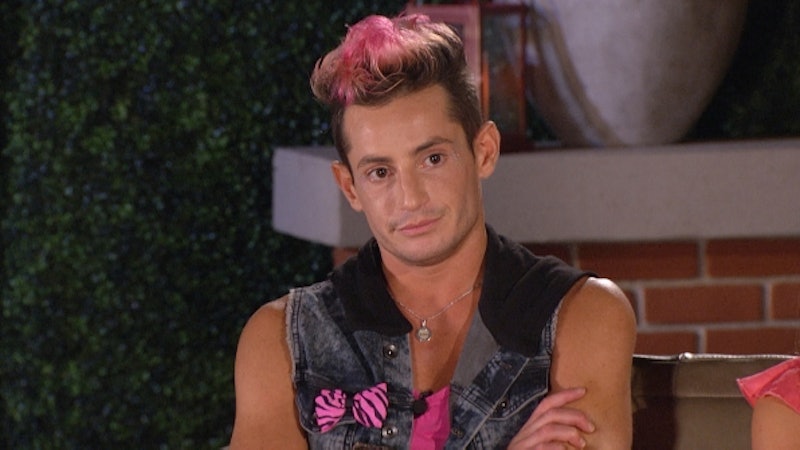 Now that the glitter that Frankie Grande threw on his Big Brother exit has cleared, the social media mogul is finding himself in a bit of hot water over some controversial comments he made while inside the Big Brother house. On Thursday, Frankie Grande and Derrick — winner of Big Brother 16 — joined the women of The Talk, the other television show Julie Chen hosts (she’s so well-rounded), to discuss this season of Big Brother. It was there that Frankie was confronted about a controversial comment he made about lesbians by co-host Sarah Gilbert. And while it was great that Frankie was made responsible for that comment and asked to address it, I couldn’t help but feel there was something else he should have addressed, like that rape “joke” about Victoria.

At The Talk, Gilbert asked Frankie if he would like to address the controversy surrounding his comments. She quoted his comments that "any lesbians choose to become lesbians later in life," when for “gay men, it doesn’t work so much that way.” Grande was able to clarify what he meant, saying, “I am a student of gender and sexuality, I studied it in college, and literally that was something regurgitated from an article that I had read back in the day.” He continued to say that he feels, “society forces us to conform to certain social norms and then takes people later in their life to choose to defy those social norms.” He ended his (pageant) speech saying that some people make the choice to not honor the norms, and instead follow who they are as a person.

Then the audience started clapping, and even I was like, “OK, I’m not really sure what any of that meant, but I guess he clarified it?” Then I was expecting one of the five women to bring up his “joke,” suggesting other houseguests "take all of [Victoria's] virginities in one night." I was looking forward to seeing his explanation on that comment, because that definitely wasn’t something that was regurgitated from an article — also, why “regurgitated”? — from back in the day.

Well, none of that happened.

Why, if these women were being open and bringing up his controversial statements, did they not bring up perhaps his most controversial, and violent statement of them all? Come on ladies, you can’t really go easy on someone who thinks rape jokes are at all funny. But they did go quite easy on him.

You can watch the entire conversation here. Let’s hope that after he acclimates to the real world, Frankie will use his social media mogul-ness to apologize for his other comments, because he really needs to.