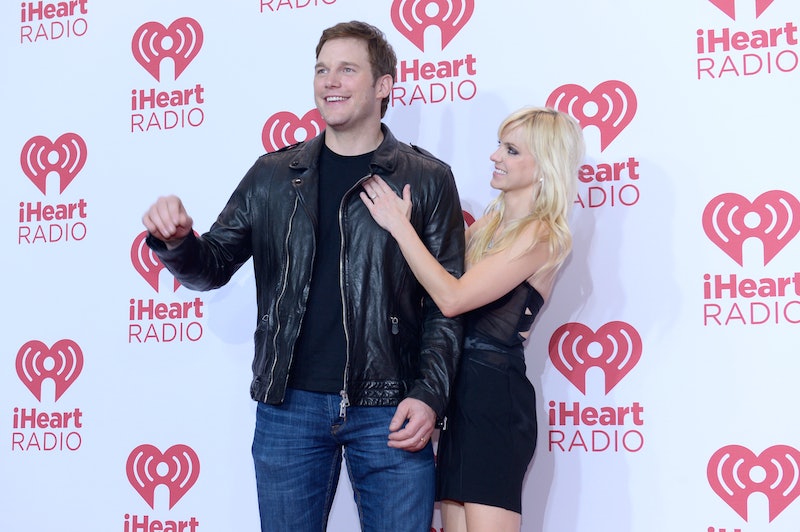 I'm pretty sure Anna Faris and Chris Pratt would have a really great time going on a double date with me and my boyfriend — we're like totally the same people if you just extract their whole famous and super attractive thing. But before becoming one half of Hollywood's most adorable couple by marrying Chris Pratt, Faris was married to actor Ben Indra (who?). So why'd they break up? Besides the fact that Indra probably didn't have the hair braiding skills that Pratt does, the Mom star told Marie Claire in a 2011 interview that her success, and Indra's lack of it, led to the end of their marriage. "That kind of destroyed my marriage," said Faris. "The divide became too great."

Considering Indra's most notable role was in the WB series Raising Dad — which starred Bob Saget and the very young Kat Dennings and Brie Larson — back in 2002, I could see how Faris' success as an actress would have caused a divide. The pair had met on set of the 1999 horror film Lovers Lane and were married in June 2004. But by 2007, Faris filed for divorce (due to irreconcilable differences), and when the divorce was settled in 2008, she agreed to pay Indra $900,000, as well as splitting their property and acting royalties.

After the divorce, she told Marie Claire she went through a party phase, saying, "I was like, 'F**k it, I've got nothing to lose, nobody to support.'" For the 2008 role of Shelley in The House Bunny (where she played a Playboy Bunny), she told The New Yorker that she got collagen in her lips (and regretted it). In the same interview, she said that after the film, she got breast implants, explaining, “It wasn’t a career thing — it was a divorce thing.”

On the surface, Shelley and some of Faris' other film roles seem to embrace the stereotypes Hollywood places on many female characters, but there is always a twist. It wasn't until I saw the House Bunny that I realized how great she is at turning the stereotype of a ditzy but conventionally attractive woman on its head by doing absolutely anything for a laugh. Typically, the trope of the "hot girl" in movies doesn't let those women be funny — and they're rarely roles that let the actress look absolutely ridiculous for the sake of comedy. But Faris' performances always go beyond the trope to deliver something unique and consistently funny.

And though Faris' 2011 comedy What's Your Number? may not have gotten great reviews, I enjoyed it and would take Faris' female-driven rom-coms over the regular slop Hollywood execs throw at us any day. Pratt also had a role in What's Your Number? (they were married at the time), but they had met on the set of Take Me Home Tonight. They got married shortly after meeting in 2009 and had their son Jack in 2012.

Both Faris and Pratt are in the middle of some pretty great careers. Mom snagged an Emmy and will be back for Season 2 on Thursday, Oct. 30, while Pratt had a seriously epic 2014 with The Lego Movie and Guardians of the Galaxy. And he's no stranger to TV either as Andy on Parks and Recreation, which will return midseason for its final season — say it ain't so! — and he recently hosted the Season 40 premiere of Saturday Night Live .

Regardless of where their careers do lead them, Pratt said on Chelsea Lately, that he and Faris plan on being together forever (everybody say, "Awwww"), and I'm glad Faris has found a partner who is supportive of her success.

More like this
You’ll Most Definitely Recognise Kyle Pryor’s Soap Star Girlfriend
By Sophie McEvoy
Keke Palmer Just Announced She's "Going To Be A Mom" On 'SNL'
By Brad Witter
The 'Kenan & Kel' Reunion On 'SNL' Took A Dramatic Turn, Thanks To Keke Palmer
By Brad Witter
Theo James Revealed The Truth About His 'White Lotus' Nude Scene & Fans Can't Cope
By Stephanie Topacio Long
Get Even More From Bustle — Sign Up For The Newsletter