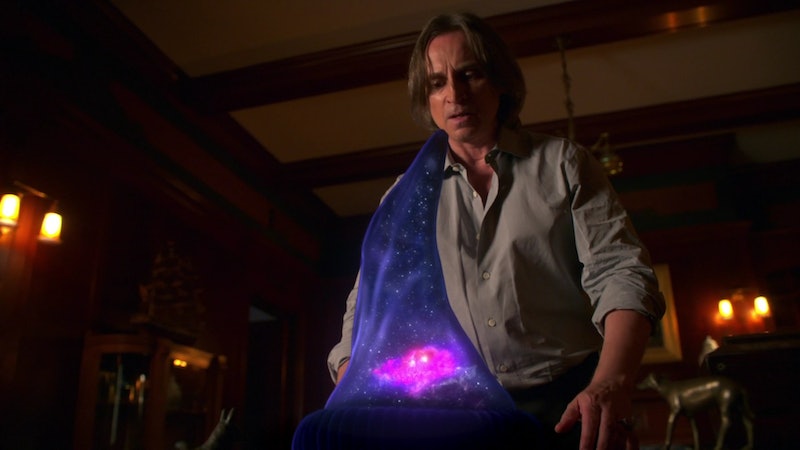 Everybody neat and pretty? On last week's Once Upon a Time Season 4 premiere, Frozen wasn't the only Disney film to be introduced on the fantasy series for the first time. The final scene showed us a more iconic piece of lore. While honeymooning with Belle in a stranger's house, Rumpelstiltskin spotted an object that he recognized. It looked a little bit like a small barrel. Later, he used the dagger (which Belle still doesn't know he has) to reveal what was inside — and Rumpelstiltskin found Mickey Mouse's hat from The Sorcerer's Apprentice. No, not the Nicholas Cage movie! Though how funny would it be if Jay Baruchel showed up? Anyway, is this the next tale coming to Storybrooke?

We even heard a spooky take on the familiar musical theme as the hat appeared. While Fantasia isn't exactly a fairy tale, the story that the musical short was based on more resembles one. Now that we've seen the famous Beauty and the Beast dance, are enchanted brooms next? More importantly, who is the apprentice? If Rumpelstiltskin recognized the hat, it's possible that he has some connection. I'm also curious as to what the hat is for. What power could it grant Rumpelstiltskin that he doesn't have already? Does it create portals? There are just too many questions wrapped up in one tiny reveal — but searching for spoilers may give us the answer. You can watch Rumpel's discovery in the video below. I have to say, I'm already digging the design of the starry hat.

The Sorcerer's Apprentice was originally a German ballad poem written by Goethe. The Apprentice is given chores to do while the Sorcerer is out, and the student enchants a broom using magic too advanced for his skill level to do the chore for him. Unable to stop the broom, he tries to kill it with an ax, which only multiplies the spell. It was, of course, animated as part of the 1940 Disney film Fantasia with Mickey Mouse in the title role of the Apprentice. The Sorcerer was named "Yen Sid," which is "Disney" spelled backwards. In some versions of the story, the Sorcerer is angry with his apprentice for the mess he has created by disobeying orders. In others, he is forgiving. I have a hunch that on Once Upon a Time, it's going to be the former.

So, who is the apprentice? All we know about Episode 4 is that it's titled "The Apprentice" and rumors that Brad Dourif will be making a second appearance as Zoso, the Dark One before Rumpelstiltskin. You may recognize Dourif from the Lord of the Rings films, where he played professional creeper Grima Wormtounge. Or, if you go way back, as the sweet Billy in One Flew Over the Cuckoo's Nest. Perhaps this will be a Zoso flashback. Perhaps Zoso is the apprentice or even the sorcerer. If we want to learn more about the dagger this season, Zoso is an excellent place to start. The only problem is, Rumpelstiltskin killed him. Didn't he?

One safe bet for the Apprentice is Rumpelstiltskin himself. We haven't really seen much of Rumple learning how to do magic. We've seen him teaching Cora, Regina, Zelena, and other women (dude's got a type), but not so much who taught him. Another candidate is Emma. She's bound to fully commit to magic lessons sooner or later. I think it would be hilarious if Emma was the one to try to use magic for a mundane chore and have it go horribly wrong.

We also know, thanks to TVLine's Michael Ausiello, that this episode will feature an "elderly, grizzled and unflappable knight who for many, many years has dedicated himself to serving a righteous cause." Ausiello thought this sounded like Monty Python. A TVLine commenter suggested Don Quixote. I for one think this sounds like the White Knight from Wonderland — though perhaps my eagerness for Michael Socha's Will Scarlet to show up is clouding my judgement. If it is indeed Camelot we're dealing with, could the Sorcerer be Merlin, as Bustle writer Christine Distasio also proposed? Could Merlin even be "the author" of the book that Regina wants to search for? It's entirely possible. OUAT has had so many crazy timelines, it's about time for someone who lives backwards (as the legend of Merlin goes) to make an appearance.

Who owns the hat now?

Back up, whose house was that in the first place? This person is significant because even if they are not the Sorcerer, they have some reason to have the hat in this new realm. Belle said the house came over in the last curse. If you remember from Season 3, that curse was caused by the Wicked Witch of the West. What does Zelena have to do with The Sorcerer's Apprentice? Or did this person just hop on for a free ride to Storybrooke? If you look around the house, there are some clues. This person has a ballroom and lots of music. They have some maritime memorabilia. They are also fond of stripes, busts, and dog figurines. If this is actually Mickey Mouse, or even Walt Disney himself, I will die.