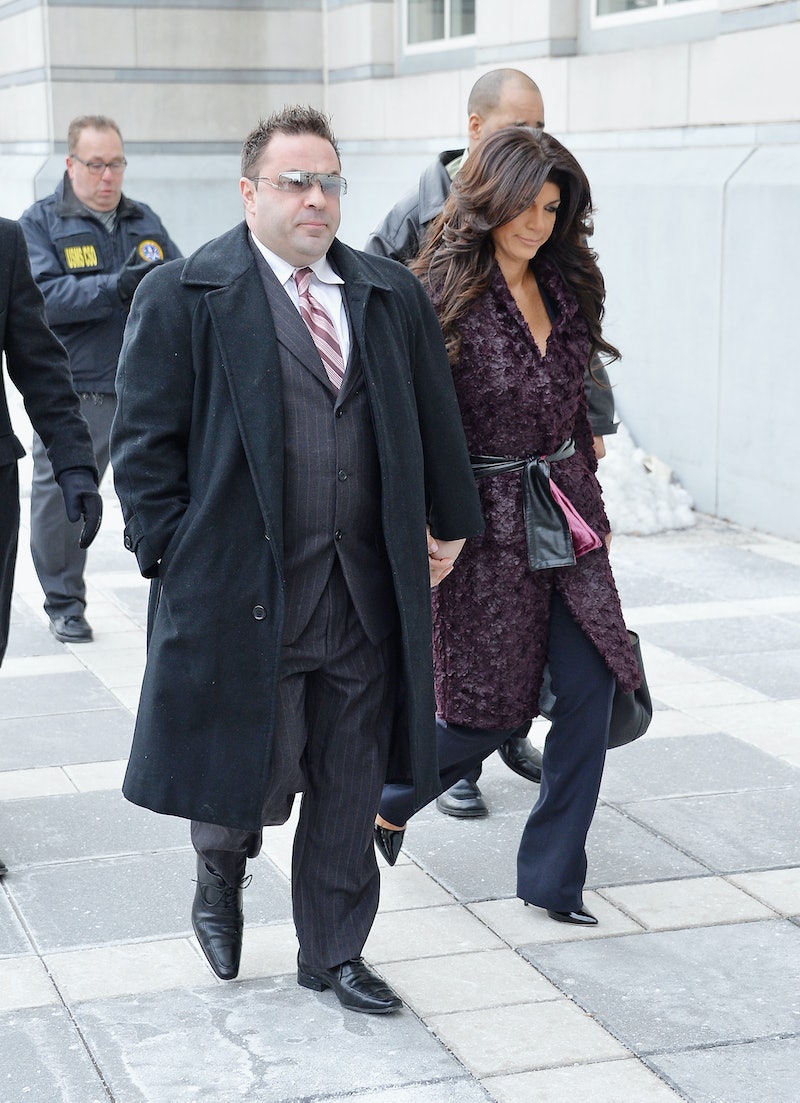 As far as reality show meltdowns go, I'm not scared to admit that I'm usually the first in line to watch the highly entertaining downward spirals of certain cast members. As cringe-worthy as most public downfalls have the tendency to be, it's no secret that they make for pretty great TV. Bravo's The Real Housewives of New Jersey is no exception. RHONJ has seen its fair share of freak-outs since its premiere in 2009, from table-flipping to out-and-out brawls, all of which made the reality show highly addictive. That being said, the descent of smarmy Joe and Teresa Giudice into financial ruin, especially given the way it's been mercilessly reported on by the media, hasn't been pretty. The judge ruling over their fraud case sentenced Joe Giudice to 41 months in jail on Thursday afternoon, and as much as I want to love that juicy piece of reality TV gossip, I can't help feeling sorry for them.

Don't get me wrong — I can't stand the Giudices (#TeamManzo all the way, baby) and I think Joe and Teresa more or less deserve the legal repercussions coming their way. I mean, they pleaded guilty to bankruptcy fraud, as well as multiple counts of mail and wire fraud to "illegally obtain millions in loans," so I'd be angrier if they didn't get slapped with jail time. It was hard to stomach watching the Giudices continue on with their lavish lifestyle on the show as if nothing was wrong, even after their legal woes went public.

What probably makes their fiasco different from the run-of-the-mill America's Next Top Model spats or Lindsay Lohan lying straight to Oprah's face on live TV, is the fact that Joe and Teresa aren't just responsible for themselves in this situation — they have four young daughters, aged five to 13. Gia, Gabriella, Milania, and Audriana will potentially be parentless depending on Teresa's sentence, and there's nothing remotely funny or entertaining about that. For the world this is just tabloid fodder, but it'll no doubt impact their entire lives, if it hasn't already.

The judge has already said that if Teresa is given jail time, their sentences will be staggered and she'll serve hers first, so hopefully the girls will have at least one parent present. Thankfully Teresa's brother, Joe Gorga, has already said that he and his wife Melissa would gladly take over parenting duty if worse comes to worse, despite the on-going feud between the families. Still, this is the kind of reality TV hot mess that I just can't get behind. Let's pray 41 months in the slammer is a long enough time for the Giudices to re-think what they're doing to their daughters. If not? Well... I guess they'll be back in time for Season 9.