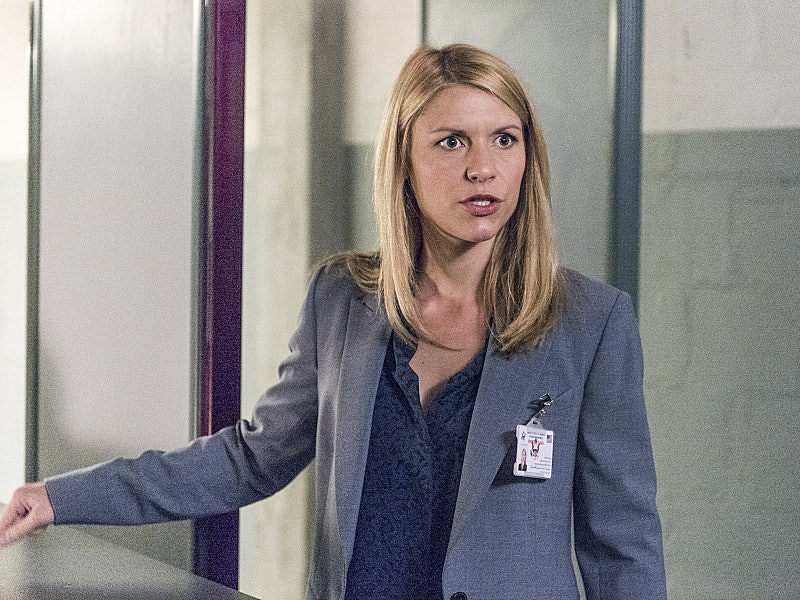 Season 4 of Showtime's hit political thriller Homeland will bring tons of changes to the show: Brody's dead, Carrie's working a new case in Pakistan, Saul's out of the CIA, there are a bunch of fresh faces (including House Of Cards' Corey Stoll, Smash's Raza Jaffrey, and Life Of Pi's Suraj Sharma)... oh, and Carrie is a mother now. Yes, that's right — the bipolar spy, who was eight months pregnant with Brody's baby at the end of Season 3, is officially a mom at the start of Season 4.

The unstable CIA analyst has never been known for making the most solid of choices in life, so it's a bit of a relief to see that she starts off Season 4 with a very good one: she leaves her baby with her father and sister, away from the stress and danger of her job. As showrunner Alex Gansa told Yahoo!, "the place that she's in now is a place where you cannot have dependents, so she was forced to leave the child at home." Some might argue that Carrie is choosing her job over her daughter, but we shouldn't judge her too harshly. The safety of the American people has always been the operative's highest priority, so this turn of events should not exactly come as a surprise to anyone.

And keep in mind that if Carrie were a man who left his daughter with his family to go protect his country, he would probably be admired for making a tough decision in the line of duty. But because Carrie is a woman, she'll likely be accused by many of being a horrible parent. I'm not saying Carrie should be given Mother of the Year Award, but it's important to acknowledge the gendered expectations that come with this situation, and to withhold judgment until we see how Homeland portrays her heartbreaking decision. It's unlikely that Carrie will just shrug it off like it's nothing — hopefully the show gets real about the sacrifice she's making and the kind of effect a momentous decision like leaving a child behind could have on a person's psyche.

But given how quickly Carrie and her daughter are separated, it must be asked: Why did the show give her a child in the first place? What purpose does the baby serve, other than making Carrie's decision to go overseas more dramatic? Will she change her mind and leave her station at a crucial moment to return to her daughter? Seems doubtful. Will the child be brought into the plot when Carrie's enemies head to the States to kidnap her offspring as leverage? Sounds outlandish, even for Homeland. So why the baby drama?

At the TCA press tour this summer, executive producer Meredith Stiehm explained that, "The baby exists as a marker for her, emotionally... but she was forced to leave the child at home." So essentially, Carrie's child is a metaphor for her attachment to Brody, and by making Carrie abandon the child, the show is officially severing ties with that storyline. (Reportedly, the marine-turned-terrorist's name isn't even mentioned once in the season premiere.)

I'd like to think that the Homeland writers didn't make Carrie a mother and then have her make a character-defining and deeply complex decision just to metaphorically apologize for a plot that most viewers feel was drawn out way too long. The idea of a baby being introduced as a mere plot device in the premiere and then ignored for the following 11 episodes just makes me feel icky. Maybe I'm wrong — maybe Carrie's baby will end up factoring into Season 4 in a major and unexpected way. We'll just have to wait and see.