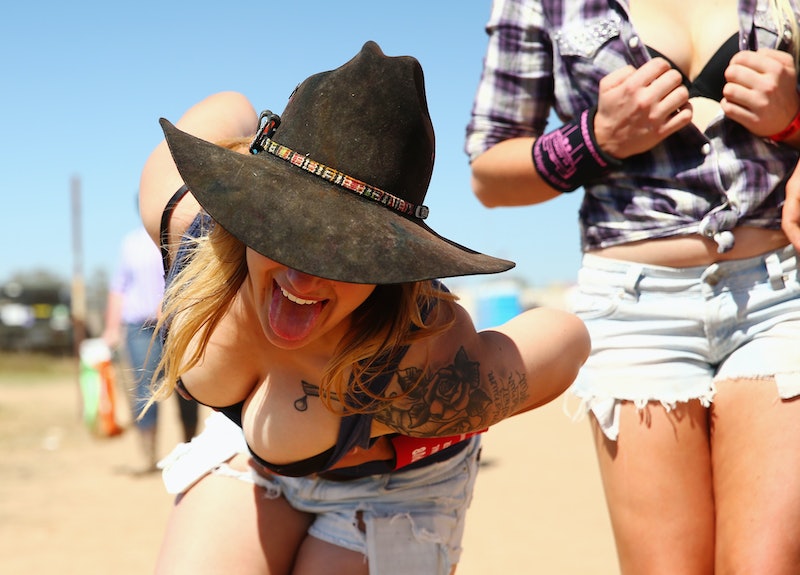 There have been several times in your life that your boobs have probably surprised you. It started in puberty, that first time that they actually existed and your mom had to not-so-subtly tell you it was time for a training bra, and then equally unsubtly parade you into Gap Kids to find one. And there were plenty of other weird moments along the way: Surprise! One of your nipples is larger than the other. Surprise! Your boobs are way bigger than your friends' boobs, or perhaps way smaller. Surprise! You have a third boob. (Okay, maybe this didn't happen to you. Yet.)

But even if you think you've seen it all, there are some boob things in life that you just can't prepare for. As most of you know, it's breast cancer awareness month, so it's a perfect time to become more breast aware overall. And it turns out your breasts aren't just full of fat glands and connected nerve tissues – they are also FULL of surprises. So let's raise a glass to our two breast friends and kick off this list of boob facts you almost certainly didn't learn in your high school sex ed class:

Your Left Boob Is Larger Than Your Right

Or statistically, it's most likely that your left is larger. It's common knowledge that no two boobs are the same size, but according to science, the hypersensitivity of the immune system's left side leads to 65% of women having a larger left breast. Have you thanked your left boob today?

You Are Probably Wearing the Wrong Size Bra

In fact, an estimated 80% of women are wearing the wrong bra size. If you're like 15-year-old me, it's because you were convinced that by wearing a C-cup bra you would eventually will a C-cup set of boobs into existence. But more likely, you were fitted at a young age when your breasts were still changing, or you were fitted incorrectly, or maybe not even fitted at all. Make some time for your boobs this weekend and get fitted again. Pro tip: the back strap of the bra should run parallel to your waistline for proper support.

Your Boobs Change Sizes Throughout Your Life

All the more reason to get fitted again, ladies! It turns out boobs are as inconstant as the sea. Not only do they have the potential to change an entire cup size depending on where you are in your menstrual cycle, they will also enlarge significantly during each pregnancy, and change shape as you get older. So obviously you should hit the mall and buy cute bras as often as possible, because it's the responsible thing to do.

Not Sure What To Major In? Try Bras

There is an entire lab in Hong Kong Polytechnic University devoted to bra development, created by the bra manufacturer Top Form. We're willing to bet that those students are among the 20% wearing the correct bra size.

Don't set off your spare Katy Perry boob fireworks just yet. It isn't easy to do, but apparently nipple stimulation releases oxytocin, the same chemical associated with the uterine and vaginal contractions of regular orgasms. I'm going to assume that with this one, patience is key.

There Are Four Types Of Nipples

Just in case you forgot what yours look like, I'm giving you this sentence as an opportunity to stop what you're doing, whether you are sitting in class or in an office or the comfort of your own home, and sneak a peek. Odds are you have one of the four main types: "normal," a nipple which protrudes a few millimeters; flat, which don't protrude at all in their normal state; "puffy," which is just like flat, except the areola is slightly raised; and "inverted," when lactation ducts cause the nipple to turn inward (which is actually quite common.)

6% of People Have an Extra Nipple

It's totally normal and usually not all that noticeable, but 2-6% of women and 1-3% of men have a third or fourth supernumerary or "extra" nipple. Because they're extra awesome. (I'm assuming this is the case, because Harry Styles is among them.)

Men AND Women Are Staring At Your Boobs

Plot twist! We all like looking at each other's racks. A study with an eye-tracking device showed that yes, men's eyes tended to linger on women's breasts, waist, and hips significantly more than their eyes, but that women also lingered on the goods over the face, too. Researchers have suggested that the motivation for women to stare is more competition-driven than the motivation for men, which is silly when you think about it, because all breasts are the best breasts and there isn't a competition when everybody already wins.

You Will Feel Better About Them If You Give Them Names

There is absolutely no science behind this last one. But if guys are allowed to name their favorite parts, shouldn't we be able to name our boobs? (Anything but Thunder and Lightning, because those names are already taken. By me.)

More like this
Why You're Seeing Green Bandanas At Abortion Rights Protests
By Lexi Inks
Bustle Newsletter: June 30, 2022
By Stephanie Talmadge
11 Neck Exercises That'll Help Relieve Tension
By Carolyn Steber
6 Abortion Advocates To Follow On TikTok
By Sara Youngblood Gregory
Get Even More From Bustle — Sign Up For The Newsletter