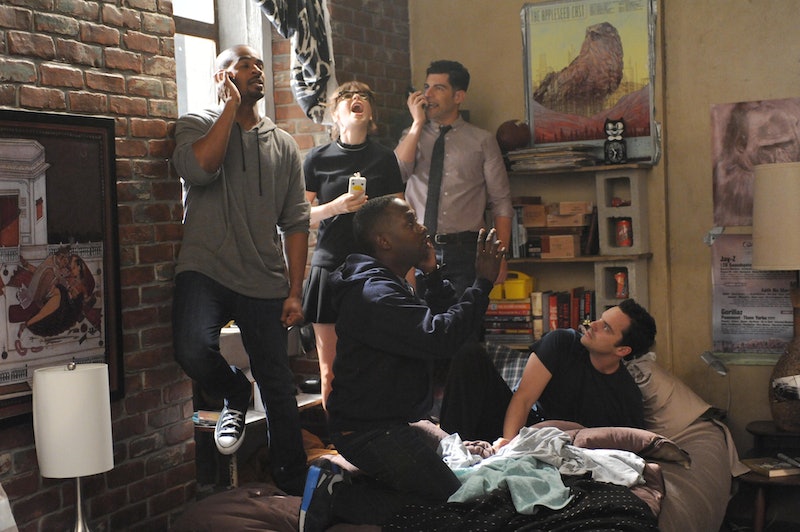 When I first watched New Girl's pilot, the promise was there: this show was the new generation's answer to Friends . And for the first two seasons, it actually was. It had the sassy group dynamic of 20-something shared living. It had referential, so-snappy-you-might-miss-the-clever-joke dialogue. It had a Ross and Rachel will-they-or-wont-they romance. It had above-the-belt humor that referenced sex and other taboos in a smart way that never resorted to shock value or outright crudeness. It had realistic friendships and heart warming morals. Oh, and College Nick.

But in seasons three and four, my beloved show has turned into something almost unrecognizable, and not nearly as much of a joy to watch. What was once a favorite (I've watched the first two seasons so many times they're committed to memory), is now one of the most laborious half an hours of my week: and I go to aerial pilates, so what does that tell you? I've actually considered cutting it out of my weekly TV lineup altogether. How did it come to this?

New Girl entered the network television sitcom as an antithesis to the popular yet banal How I Met Your Mother and The Big Bang Theory. For those of us raised on Friends, Seinfeld, Will & Grace and Frasier, New Girl was a reminder that mass culture hadn't quite given up and settled on middling. New Girl put together creativity, joke-heavy dialogue and compelling plots (right down to Winston's crazy b-stories) in a way that's generally relegated to more "cult" leaning shows like Parks & Recreation.

But after two brilliant introductory seasons, New Girl just stopped bringing that magic. I blame two things for the show's demise: 1) Nick and Jess' premature romance and 2) The return of Coach. In terms of the former, of course Nick and Jess would eventually get together, although I truly do think that New Girl jumped the shark on igniting their (doomed) romance.

While the build up to Nick and Jess kissing in "Cooler" (Season 2, Episode 15) was electric, and while the pair grappling with their relationship status while simultaneously living together was compelling, the show didn't know what to do with Nick and Jess when they actually got together, which was obvious right from the first episode of Season 3 when the pair was hiding out in Mexico. The characters themselves didn't even know what to do as a couple; the third season started out with solid humor and a certain poignancy (especially in the discovery of the Schmidt/CeCe/Elizabeth love triangle), Nick and Jess, as a pair, really had nowhere to go except Mexico. Which was an ominous precursor to the reality of their situation, and the pickle the New Girl writers put themselves in by pairing Nick and Jess off so early.

Comparatively, Friends' Ross and Rachel (because every fraught but ultimately destined to be together television couple will forever be compared to Ross and Rachel, which is truly the mark of iconic television) first kissed in "The One Where Ross Finds Out" which was Season 2, Episode 7; even sooner than Nick and Jess locked lips. But the main difference between Ross and Rachel and Nick and Jess is their relative maturity. Nick and Jess are, for the most part, 30-year-old juveniles. Ross and Rachel had not only a distinct sense of self, but a distinct sense of purpose as individuals. And even though Rachel was transitioning out of her "kept woman" life into becoming an independent, self-sufficient career woman, she went about it with a commitment that neither Nick nor Jess have towards anything. That might be indicative of the current generation's reluctance to "grow up" or even forge a self-made identity in a world where anything we can conceive can be acquired almost instantly. What I'm trying to say is: there's no sense of the long haul with Nick and Jess, not even when it comes to the way they relate to themselves.

So the show had no where to take them. Whereas Ross and Rachel (or to give a contemporary example, Mindy and Danny in The Mindy Project ) faced the challenges of being two individuals adjusting to one another in a romantic context, Nick and Jess were given no defining ideas and needs outside of their relationship, and as a result, their personalities became painful caricatures. Jess's cutesy optimism became painfully twee and annoying, where Nick's loveable curmudgeon/slacker hybrid became a ridiculous, bumbling loser. By the time Nick and Jess broke up at the end of Season 3, there was nothing left of their tempered original characters. Now we're stuck with these campy, frantic distillations of the most cloying parts of both characters.

Neither are particularly funny or interesting to watch (which is a crying shame because Zooey Deschanel, surprisingly, does physical comedy very well, and Jake Johnson was hilarious as Nick), having played out the main component of what drove their characters forward from the beginning: their relationship. With that burned out and no forward trajectory of tension or hope of reconciliation (unlike Ross and Rachel), the show can't quite figure out what to do with the characters.

As for the return of Coach, it's not the character per se that has put a strain on the New Girl in Season 3. Damon Wayans Jr. is brilliant, and it was exciting to have him fall neatly back into the New Girl loft after Happy Endings was prematurely and unnecessarily cancelled. However, having Coach back (and the inclusion of CeCe on a more consistent basis in Season 3) creates a new dynamic in the group, which again, the writers don't seem to know quite how to handle. A cast of six main characters seems to be too much of a load for New Girl to bear, The show had a much tighter, funnier script with four, and the odd appearance of CeCe.

When the six cast members are all together, there's something fast and loose about the chemistry. I can't quite put my finger on it, but it feels like six actors reading lines (which objectively it is, but that's not a dynamic that makes for audience connectivity.) The thing that made shows like Friends brilliant was the way the cast were able to play off one another, and the natural feeling of their interactions, as though they were just six friends hanging out. New Girl doesn't have those special, idiosyncratic relationships, nor does it have the dialogue to carry off false relationships. Pay close attention to scenes that involve all six cast members: it's generally a lot of shouting and not much is really said or achieved. The show would benefit from having some structure to its ensemble scenes, otherwise the action goes nowhere, and the dearth of actual jokes becomes cringingly obvious.

Tonight might be the first night I don't watch New Girl, so clumsily has its fourth season begun. With no through line to the story, its characters becoming wild parodies of themselves and group interactions having been reduced to everyone yelling over one another, the show seems to have backed itself into a corner. New Girl has become it's titular new girl; she was wonderful and exciting when you met her at the bar, but after she showed you all her party tricks, there wasn't really enough substance to make a friendship worth pursuing.