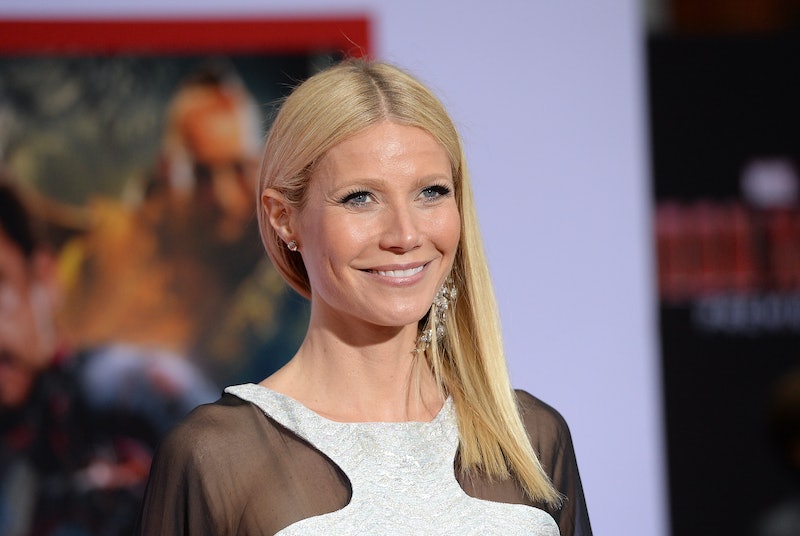 Let the battle of blonde domestic goddesses continue. Ever since the not-so-subtle, not-so-nice comments from Martha Stewart about Gwyneth Paltrow's domestic endeavors and how she "just needs to be quiet," it's been quite obvious to everyone that the two are not huge fans of each other. And now that Paltrow has hired a former Stewart CEO to run Goop, things are bound to get a little more heated. But in case you're wondering if Paltrow is all torn up over Stewart's feelings towards her, she says it's no big deal. In an interview with Us Weekly, Paltrow said she's simply "so psyched" that Stewart sees her as competition.

To be fair, Paltrow hasn't exactly appealed to the masses in her time as actress-turned-domestic guru. Between her thoughts on the feelings (yes, feelings) of water and complaints about how fame is "so hard," Paltrow hasn't really made it easy for people to reach an agreement when it comes to their opinion of the actress. Stewart, on the other hand, seems to know exactly how she feels.

In the original interview that began the Paltrow v. Stewart feud (tune in next time to see who can make the better batch of gluten-free, carb-free, butter-free brownies), Stewart was pretty clear on her issues with Paltrow.

"If she were confident in her acting, she wouldn't be trying to be Martha Stewart," Stewart said.

It's like Mean Girls, but with extremely expensive kitchen utensils.

Yes, it's all just a little ridiculous. And, to be honest, a comparison of Martha Stewart and Gwyneth Paltrow just seems odd to begin with. For starters: This is Martha Stewart, the aunt you wish you had in the kitchen during Thanksgiving, baking away glorious calorie-laden dishes and discussing the one time she went to rich people prison. That Martha Stewart is now "competing" with Gwyneth Paltrow, who I'm pretty sure only eats carbs on special occasions. One is the aunt we wish we had, the other is the friend who motivates us to go to spin class even though we'd rather eat our feelings.