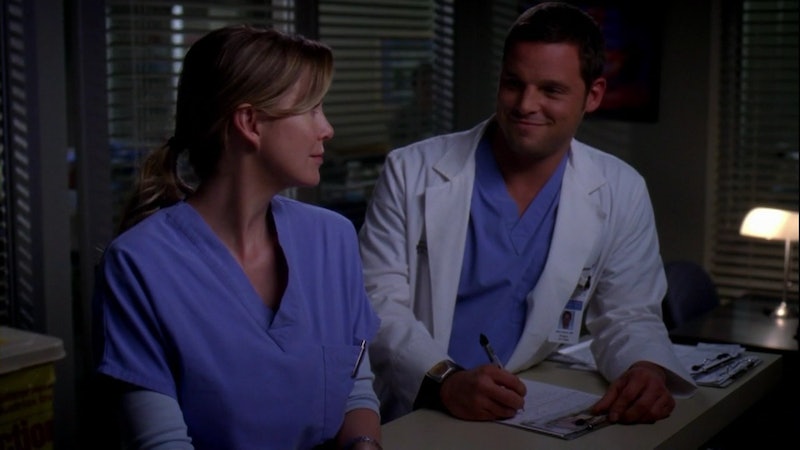 With Cristina Yang gone from Grey's Anatomy , Meredith Grey is officially accepting applications for her new person. The first name on her shortlist? Alex Karev — and don't worry, it's not because they plan on sleeping together. Let me repeat this so everybody knows it: Alex and Meredith are not cheating on their significant others with each other. At least, not this early in the season.

Instead, they're becoming BFFs... mostly because right now, Meredith desperately needs one. So many parts of her life seem to be falling apart. Cristina's in Switzerland, McDreamy is being a McDouchebag, and suddenly, she has a sister she's never heard of before? Meredith obviously needs some serious assistance here, and that's where Alex (who can be so endearing when he wants to be) steps in. He's going to help her get to the bottom of this whole Maggie thing, because there's only so much tequila can do before it starts causing more harm than good. (Spoiler alert: The limit, for me, is like three shots. Then I just end up watching the Game Show Network alone in the dark, crying every time a contestant on Family Feud gets an answer wrong.)

Let's get one thing straight: Alex is definitely no Cristina. Alex goes directly to the computer to start combing through Seattle Grace's past medical records, when — in Meredith's words — she and Cristina would "just be dancing right now."

Truth. But just because Alex's approach is different from what Cristina's would be doesn't mean it isn't just as effective — or more. When it comes to the Maggie issue, Meredith needs someone who will tell it to her straight, without a whole lot of regard for her feelings. Richard tried to sidestep the issue in an effort to find the right words to tell Meredith about her sister, and it only led to hurt feelings when she found out in the end that he had known all along and had been keeping the secret from her.

I absolutely love the idea of Meredith and Alex becoming BFFs, especially because in the last 11 years, when Alex was at his most insufferable, Meredith was always the one (sometimes the only one) who went to bat for him. It's time for Alex to return the favor, and I can't wait to see him kick some ass in her favor.