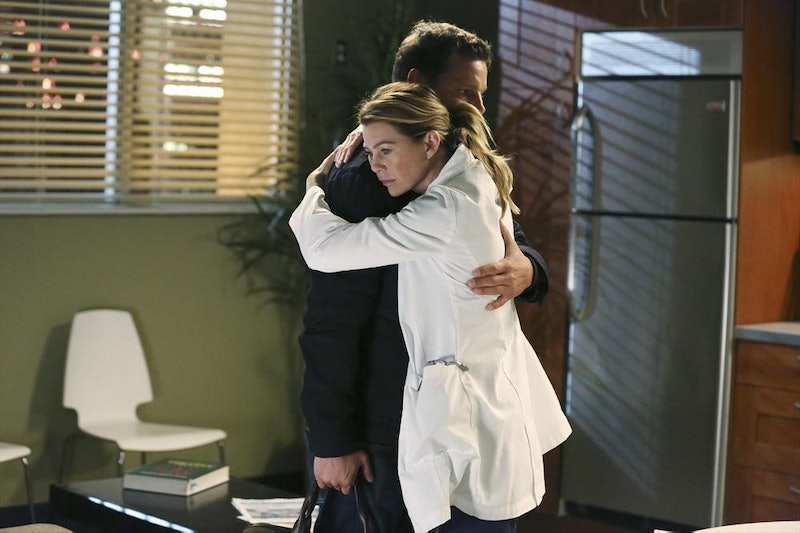 We're only two episodes into Season 11 of ABC's Grey's Anatomy , and the show is not wasting any time. Meredith already knows that new cardiothoracic surgeon Maggie Pierce is (allegedly) her biological sister, a plot line that could have been dragged out for half the season. Derek has already quit his job with the N.I.H. and cancelled his move to Washington, D.C. Alex has already been fired from his private practice and is competing with Bailey for Cristina's empty seat on the board. (It kind of feels like the writers are compensating for something, doesn't it?) One aspect in particular that's proceeding an alarmingly rapid rate is the relationship between Meredith and Alex.

Now that Cristina has left for Switzerland (and Izzie got fired and George got hit by a bus), they're the only two of their original group of interns left at Grey Sloan Memorial Hospital. In the Season 11 premiere, which picked up right where the Season 10 finale left off, Meredith — in what I can only hope was a semi-crazed coping mechanism — barely hesitated in dubbing Alex her new "person."

The two surgeons have only grown closer in the two episodes since then. In the premiere, they shared an uncharacteristically tender hug; in the second episode, Meredith leaped into his bed just like she used to with Cristina (kicking a naked Jo out in the process) to vent about her marriage. And now, a sneak peek of this Thursday's third episode shows that their relationship has officially gone next level:

Yes, that is Meredith checking out Alex's goods and declaring "Your junk is spectacular." Yes, she was joking. No, I don't care, it's still gross to think about Meredith looking at Alex's 10-blade.

I don't actually think that Meredith and Alex are going to fall in love or anything. I have to believe that Shonda Rhimes learned something from the "Gizzie" debacle. But neither am I counting out one seriously ill-advised, tequila-fueled mistake. MerDer have officially been an item since the end of Season 4 (that's six seasons now), and what better way to shake up a stale relationship than with a smattering of infidelity?

I hope I'm wrong, if only because portrayals of true male/female friendships with absolutely no romance involved are in such short supply on today's television landscape. One very strong piece of evidence against a potential Meredith/Alex hook-up? Jo. While Meredith may be having second thoughts about her marriage, Alex is harboring no such doubts about his girlfriend. Meredith may slip up, but it's harder to envision Alex cheating on Jo.

That being said, if Alex and Jo do start having relationship problems... consider yourself forewarned about any ensuing on-call room shenanigans.