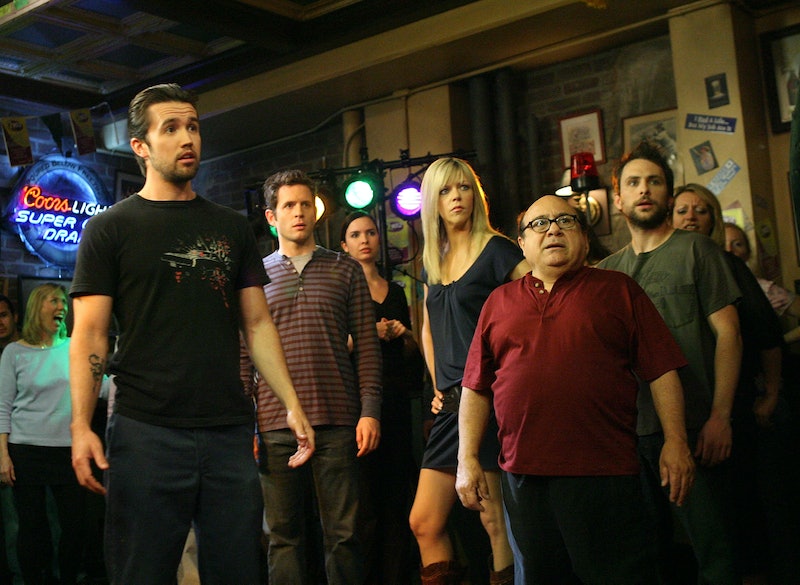 Season 10 of It's Always Sunny In Philadelphia premieres in January, which still feels a long way off for Sunny fans like me. For those of you who don't watch, you're (still) missing out. Called "Seinfeld on crack", Sunny follows the lives of five very screwed up, selfish individuals who run a bar in Philadelphia and have no regard for friendships, empathy, or human decency. And it's got Danny DeVito. Each episode typically focuses on "the gang" trying to get rich quick or screw someone over.

While we continue to reluctantly make productive use of our time, we now have something to tide us over: The titles of the new season's episodes have been released, which means we can at least begin to let our imaginations run wild speculating about what each episodes will be about based on their titles. Let's take a peek at what Mac, Dee, Dennis, Charlie, and Frank could possibly have in store for us, shall we?

The first episode of the season already has a synopsis, so we can skip the guessing game. Here's what it is, for those curious:

The gang try to solve world hunger by purchasing a small plot of land to start growing their own food, however Charlie ends up buying "magic beans" instead of seeds.

Of course he does.

Psycho Pete last appeared in part 2 of the high school reunion episodes. He is, as his moniker implies, very much a psycho. This title is pretty clear about what happens — he returns — but I'm going to go out on a limb and guess that a role reversal will occur, and Psycho Pete, upon meeting Frank (played by Danny DeVito) will determine that Frank is the real psycho. Because, come on, it's Frank.

In this episode, Mac starts his own spy agency. Frank is totally in, but Charlie is too paranoid and opts out. Mac, tring to fill Charlie's spot, advertises for spies by putting fliers up around town. Dennis says, "Mac, that's not how you find spies, it's too obvious" and Mac says, "Dude, it's totally how you find spies, because the real spies will get that it's a decoy within a decoy!" and Dennis will say, "But it's not a decoy within a decoy, because you're actually looking for spies based on a flier. This whole thing is gonna fall apart and I want no part of it." And Dee will offer to be a spy and Mac will say, "Girls can't be spies." And she'll say, "What about Harriet the spy?" And he'll say, "Dee, stop making things up." Meanwhile, Charlie will befriend a squirrel.

Anyone who watches the show already knows what "Charlie work" is: menial, janitorial-type stuff around the bar that no one else in the gang wants to do. (And it also entails beating rats with a stick.) Charlie will have a breakdown and refuse to do anymore Charlie work, leading the gang to try to hire the local homeless priest, Rickety Cricket, to fill the void. Dee wants to audition for a local production of My Fair Lady and offers to do the Charlie work as method acting. She'll suck at it. She'll also realize just how much Charlie work sucks, so she'll try to convince the gang that Charlie work should include regular spa treatments. Frank decides to buy an amusement park, and runs it to the ground. But he'll recruit Charlie to do the Charlie work in the amusement park, leaving Charlie back where he started.

I'm guessing "Family Fight" is Sunny's version of Family Feud. The gang will go on the show, and they'll find some great, random actor to play the host, like Steven Weber. They decide to go on the show in the first place because they need money because the bar hasn't been making enough. They'll yell at Dee the entire time, even though she's the best at the game, and will come up with the winning answer that could save them all — but Charlie hits the buzzer instead, and because he doesn't understand the rules, winds up losing everything for them. (DENNIS: "The category was "stuff you'd hate to find in your teenager's closet" — why, oh why, did you say spaghetti?!?" CHARLIE: "Well, okay, have you ever put spaghetti in a closet? That stuff goes bad. You wouldn't think it would, because it's coated in sauce and everything, so you'd think that would protect it, but actually, it doesn't. Trust me, you find spaghetti in a teenager's closet, and you're not a happy camper." DENNIS: "I hate you, Charlie. I really, really hate you.")

"That's it, everyone", Frank will say at the start of the episode, "I'm done. I'm officially retiring." DENNIS: "From what, exactly?" FRANK: "What do you mean, "from what"? From everything, Dennis." Mac will interject with, "Yeah, but Frank, what is it you actually do?" Frank will get annoyed and will spend the rest of the episode trying to prove how hard he actually works. He'll make a presentation, but will pay Charlie to do it. Because Charlie can't read or write, the presentation is a disaster. This causes a rift between Frank and Charlie. Meanwhile, Dee tries to convince everyone she has a gluten allergy. No one cares.

Episode 7: "The Gang Misses The Boat"

I don't think this refers to the gang not getting a certain fad or getting in on the ground floor of something — I think it refers to them literally missing their boat, the one that burned down, in the third episode of the sixth season, "The Gang Buys A Boat." The brilliant episode in which Dennis gives his whole spiel on "the implication."

They decide to buy a new boat, but Charlie accidentally buys a bounce house in a the shape of a boat instead.

MAC: "Charlie, what the hell is this?"

MAC: "It's not a real boat, Charlie! It's a bounce house! We can't go sailing in this!"

CHARLIE: "But it looks like a boat, and I don't know man, I think that's pretty close to it actually being a boat, plus, I got a great deal for it."

DENNIS: "Why did we put Charlie in charge of buying a boat?"

CHARLIE: "Yeah, if you think about it, that's a fair point, so really, this is your fault."

Frank will charge through, completely naked.

Well this could be anything. I'm going to feverishly hope that we see a return of Chardee MacDennis, the Game of Games, because why not?

Or maybe, since the episode title is the episode number, they're going meta with this one, and the gang will realize they're actually in a TV show. That would be fun, though bizarre. Since the episode title isn't creative, it could go two ways: something totally major happens in this episode, or nothing happens at all. I peeked at the cast list for this, and someone is cast as "Tom (Dee's date)", so I'm guessing Dee has a main plot point. There's also someone cast as "Ugly Guy." This one's all over the place. I got nothin'.

With an episode title like this, it's gotta be a Mac episode, although the episode following this is a Mac-titled episode, so maybe not. Scanning the cast list, Mac's mom is in it, so there's a good chance it is. Also apparently Dax Shepard is in the episode (!!!), as he's listed. This sounds like someone formed a superhero group, or maybe Mac really does form an agency of spies, and they're known as the "Ass Kickers." I could see Mac leading this group of Ass Kickers, showing off his sweet ninja moves in his sweet duster. And speaking of Mac...

I'm going to guess that Mac doesn't actually kill his dad, but rather only thinks he did, or something like that. I bet it's like the two part episodes, titled "Mac and Charlie Die", in which they don't actually die, but try to fake their own deaths (to avoid a confrontation with Mac's dad, ironically.) I'm guessing they're doing a similar fake-out with the titles here. Or maybe he does kill his dad, but it's an accident, and he asks the gang to help him clean up his mess. We know that Mac's dad was paroled and went to Tijuana. Maybe Mac tries to make things right with him, only to accidentally murder him. It's pretty dark, but they've gone dark before, like when the gang dragged a dead prostitute down a hallway in "Frank's Pretty Woman" in episode 1, season 7. Still, I think it's more likely that his dad doesn't actually die. But let's say he does. I could see it going down like this...

DEE: "Whoa whoa whoa there. We are not going to protect him. Mac, you're on your own."

CHARLIE: "Naw, we got ya buddy, plus, it some places, it's legal to kill your own dad, so maybe you're fine."

DENNIS: "I'm sorry, what did you say? It is absolutely not legal anywhere to kill your own father, Charlie. Jesus."

DENNIS: "Charlie! For the last time! The two hobos who argue outside the bar in suits are not "the news"! We've been over this!"

And we end on a cliffhanger. Does Mac get away with it? Is his dad really dead? We'll find out in season eleven!