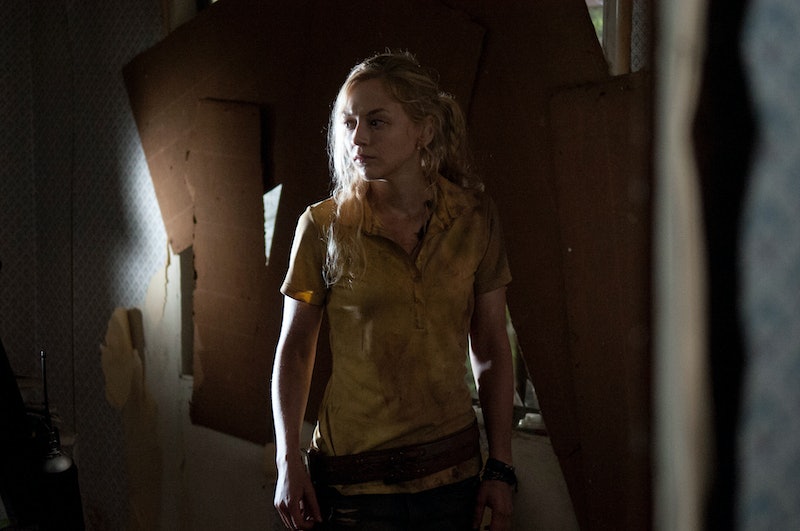 While we finally got the answer to the question that's been haunting us all summer in the Season 5 premiere of The Walking Dead and know that yes, Terminus is filled with cannibals, there is still one huge mystery remaining. What happened to Beth? The premiere didn't ignore her entirely, as Daryl did explain to the group what happened to her, but we already knew that and weren't given any new information. With everything going on at Terminus, there wasn't really time for anything else, but at least a glimpse of her would've been nice.

For now, we're left with just a few more clues revealed in the preview for next week's episode and some very vague comments Scott Gimple gave on Talking Dead. It was confirmed at Comic-Con this summer that Father Gabriel would be joining The Walking Dead this season, so seeing him in the preview wasn't that exciting. However, since we see him completley alone about to be eaten by walkers begging for help from Rick's group, one of the most popular theories for Beth's disappearance might be disproven. After some sharp-sighted fans noticed that there might have been a cross in the back of the car that took Beth, it was widely speculated that she was with Father Gabriel. Since he's generally a good guy in the comics, that wouldn't be too bad — especially considering it'd increase her likelihood of being reunited with the group.

But if we meet Father Gabriel trapped with no one to save him, it's safe to assume that Beth is not with him. On Talking Dead, Gimple confirmed that Beth is alive and as we saw in a trailer for this season, "in a place." Woah there, Gimple! Be careful, you almost revealed some actual information! But it is actually sort of helpful, as Father Gabriel isn't exactly "in a place" in the preview, but pinned to the ground. The preview for next week also shows the group in a church, and wherever Beth is, it definitely did not seem like a church.

So while the premiere gave basically all the Terminus answers we were waiting for, and next week's episode will introduce us to Father Gabriel, Beth remains a mystery. We know she's alive, but on The Walking Dead, that actually isn't very reassuring.