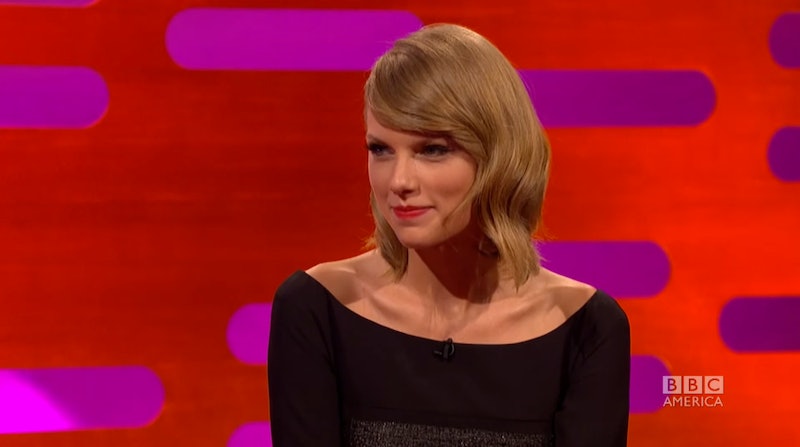 When Taylor Swift made an appearance on The Graham Norton Show on Saturday, most articles you can find about the interview discuss her playful fight with John Cleese after Cleese insulted Swift's cat Olivia Benson. The two of them are self-proclaimed cat people, but it appears that he has very different views on what constitutes a cute cat than she does because he asked her if Olivia Benson was "a proper cat" or if she was "damaged." Swift was obviously not amused. However, an easy moment to miss near the end of the clip stands out to me in light of Swift admitting to having a feminist awakening in her adult years. Not only did she call Cleese out on insulting her cat, she also called Cleese out on insulting women. She just did it in such a subtle and classy way that no one noticed.

Near the end of the clip, Cleese is reaffirming his preference for cats over dogs. “I much prefer cats,” he says. “They’re unpredictable and cussed, like women.” Swift’s smile fades for a moment before she returns with a bigger, polite smile and says, “We don’t want to do that.” Because they might be joking around and having a good time, but we can stop with the sexism right now.

Just as important as the fact that Swift called Cleese out on his comment is the way that she called Cleese out on his comment. It was a move that harkened back to Emma Stone calling out Andrew Garfield on his sexism during their promotional tour for the Amazing Spider-Man 2. Without getting upset, without making a scene, without becoming the "dreaded angry feminist stereotype," these women warned those around them when they were wading into dangerously sexist waters and they did it in an utterly nonthreatening way.

On the same Monday where I called attention to Kristen Stewart's belief that people are wary of feminism because they think it's all about yelling and anger, it's refreshing to have Swift display that you can insert feminism into a conversation, educate through humor, without compromising your values or turning the mood into an awkward one. Your views are valid and don't necessarily have to be expressed through angry ranting. The fact that Swift can so easily call Cleese out on this bit of not-so-subtle misogyny is something that shouldn't be ignored in favor of focusing on her more humorous exchange with him about her cat. We all know Olivia Benson is adorable.

That's just not up for debate. What we need to call attention to is the fact that Swift continues to prove that her words about feminism aren't just hot air or cashing in to what seems to be a new trend among our celebrity icons. She's truly making the effort to live a more feminist lifestyle, whether it's by supporting other women, supporting feminist campaigns, or subtly calling those around her out on their sexism. Swift is a true inspiration.