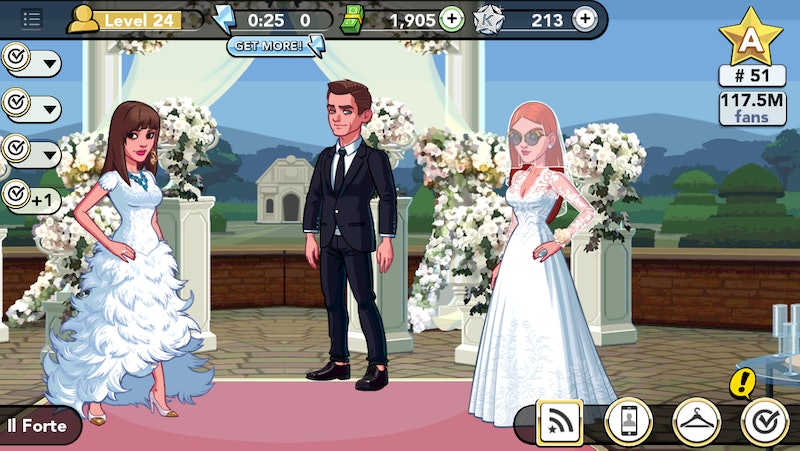 So you got married in Kim Kardashian's iPhone game. What happens now? Do things go back to normal and you just happen to have a spouse? Do the two of you get to do couple-y things like host dinner parties and dress up in couple themed Halloween costumes? And most importantly, can you go on a honeymoon in Kim Kardashian: Hollywood? I only ask because Kimye's own was so glamorous that I was hoping for a similar globetrotting experience after I tied the digital knot. I knew we couldn't have the same vacation, after all, Ireland isn't an available location in the game, but I thought we could jet set somewhere exotic together. Well, unfortunately that's not exactly how the post-marriage celebration goes.

You can go on a honeymoon in the game, but only if your definition of honeymoon is as loose as your publicist's Maria's definition. After the ceremony she rings you up to tell you congratulations and then tells you to go out there and be seen by the press lest they forget your name. Maria then sets the task for you to complete your honeymoon, A.K.A. three dates in a 24-hour period to keep your spouse and the public entertained. I suppose you could choose to have these dates in a far-off location like Italy or Paris or something to give it a vacation feel. Although that would just be thinly disguising the reality of the lame honeymoon situation.

The thing about this game is that the dates seem a lot more like jobs than romantic occasions. They cost lightning bolts, money, and time to complete. At the end of each one the media writes about you. Sometimes the truth and sometimes lies, but they're always there making you win or lose fans which takes away from the romance a bit.

It just goes to show that game players have it way harder than the actual Kim Kardashian because at least she got to take her honeymoon in peace and not have to work while she was on it. But hey, Kim heard our frustrations over not being able to get married. So maybe in time she'll rectify the totally lame honeymoon situation too.