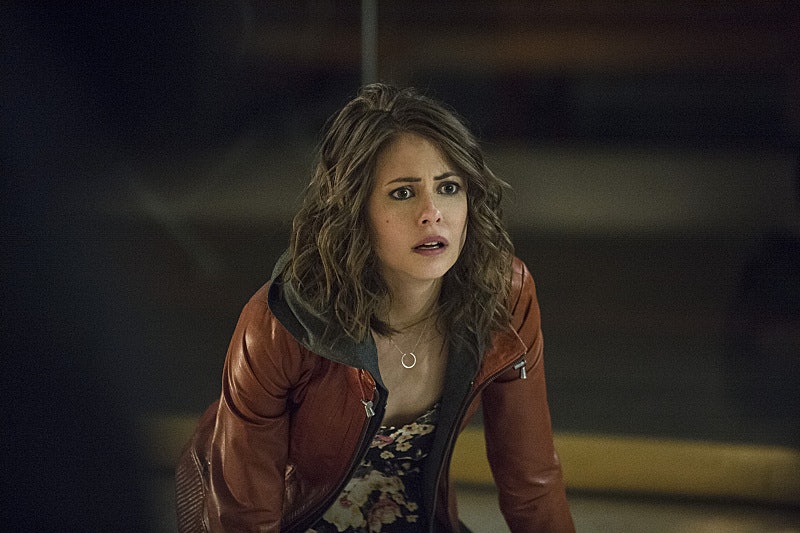 The last time we saw Thea Queen on Arrow Season 3 she was — wait a second, we haven't seen Thea yet. Oliver's little sister was noticeably absent in the first episode back. She's gone with good reason, though: the last time we actually saw her, she was feeling completely betrayed by everyone in her life (the two at the top of her list, Oliver and ex-boyfriend Roy). After being kidnapped by Slade, and watching her mother die by his hand, she decides to leave Starling City once and for all. She makes it as far as the train station before someone shows up to stop her: her real father, Malcolm Merlyn. We can assume that Thea is still with Malcolm, and judging from the released promo for this season, he's teaching her a thing or two about fighting.

It's always been hinted that Thea would turn towards the dark side eventually. While she is a good-natured kid, she has always had her rough patches. It was almost like she was trying to be bad at some points. But she always had a good solid conscious. She was the one to take over Verdant when Oliver went AWOL back to the Island. Then she got herself all messed up on Vertigo. One step forward, two steps back. But hey, at least she and Roy were trying their hardest to make their relationship work.

Then, as we know, it fell apart. Moira's death completely pushed Thea over the edge. Completely understandable. As Willa Holland told Comicbook.com, Thea is "at a place where she is not gonna let anybody hurt her ever again." Holland goes further on to say that "the idea that season three is kind of Thea’s arc, on her version of the island." AKA, Thea's Hell.

I bet we're going to see a lot of tormented, pissed off Thea and I cannot wait. John Barrowman has also been made a series regular, so even if Thea leaves him to return back to Oliver, Malcolm is still going to be around. I could very much see a troubled Thea agreeing to do Malcolm's dirty work for him — especially things like spying on Oliver.

Malcolm really wants to connect with his daughter, considering Thea's all he's got left. One of the promos released for this season (which you can watch below) suggests he's doing a pretty good job with it. Thea can fight. But, what is she going to do with this new found pugnacious spirit? Doubtful it'll be all kisses and hugs for everyone when she does finally reappear in Oliver's life. But it does sound like she'll at least be returning on cordial terms with him. Austin Butler has been cast as a new love interest for Thea, and he's going to play a DJ at Verdant, which means Thea is back at Verdant. I can of course see Oliver welcoming Thea back with open arms, they're brother and sister after all. However Roy, now a full fledged member of Team Arrow, maybe not.

Malcolm may not be a good guy, but I can't wait to see what tricks he's put up Thea's sleeve.