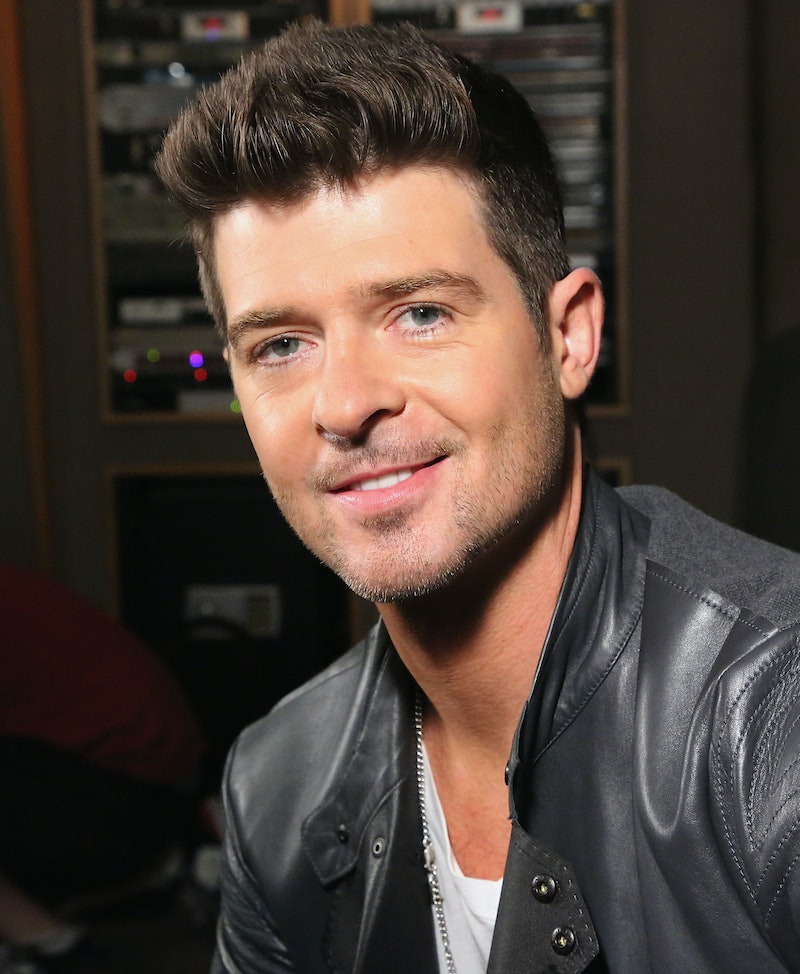 After all of the disturbing music videos, episodes of begging, and general endeavors to seem like a reformed individual, it looks like creepy-leer-personified Robin Thicke is starting to embrace the fact that he's about to be legally alone. Allegedly, Robin Thicke hosted a divorce party which, assuming that it actually happened, easily wins the award for "slimiest thing ever." If this doesn't make the whole "Get her back" campaign look like a streaming pile of false contrition, I don't know what does.

According to Page Six, the newly single pop star hosted a band of his celebrity friends and models at nightclub Hyde in LA last Friday. Allegedly, this soiree was to celebrating his split from Paula Patton, who filed for divorce last week. The guest list reportedly included the likes of Leonardo DiCaprio, Emile Hirsch, and Tom Hardy which is, if not entirely surprising, sorta disappointing. Apparently, Thicke was especially on the prowl. DiCaprio, however, got honorable mention:

Leo and Robin were being super flirtatious and talking to tons of girls. Robin, in particular, was dancing and talking to a pretty brunette throughout most of the night. At one point, he grabbed a girl’s hand and was like, "Let’s dance" . . . he was in great spirits... Everyone was dancing until past 3 a.m.

After this, the caravan reportedly went merrily on their way back to Thicke's house in the Hollywood Hills. This is where things start probably started looking like a reenactment of the "Blurred Lines" video, to the chagrin of, I'm guessing, the models.

Just a few months back, Thicke was in the midst of his "win back my horribly-wronged wife because I'm a terrible person" tour. He made numerous public apologies to her and wrote an entire album of songs inspired by her, all to the end of, being a changed man. You know, the the kind of changed man who wouldn't celebrate his efforts to ingratiate himself failing tragically. But hey, maybe these efforts were (SPOILER ALERT) totally for his own benefit from the beginning.